This one is going to be controversial, because this map is not a dedicated singleplayer map: it’s co-op, for up to 7 players (odd number, but who am I to complain?). However, it can be played quite happily alone, and I do, with potentially shocking regularity. Why? Because it’s procedurally generated, that’s why! Every play-through is different!

So while this does not strictly qualify for the SPRPG Diaries by being a dedicated singleplayer map, it is a map that’s stayed with me and that occupies much more of my brain than it should. I think, therefore, it deserves some attention and discussion.

I think one of the big reasons I keep coming back to Warcraft Rogue is that it’s possible to set how long it should last by choosing an appropriate map size. If you’re in the mood for a shorter game and you’re on a little laptop, you can make it tiny; if you want to chew through it for hours on a proper computer, you can max it out. It’s the RPG echo of something like the generated skirmish maps of Age of Empires II — configured as much for the amount of time you want to fill as for true variety between matches. (This is the procedural dream I’ve always chased — a system for generating self-contained RPG “skirmishes” just like you can do in an RTS.)

Once you’ve set the world to generating, you’ve got plenty of time to build your hero before it’ll be ready. Heroes are a mix of race and then class, with race contributing base stats and two abilities and class filling out the rest. After that, you get to pick your particular perk — every 3rd level, instead of getting an ability point, you get a bonus according to your perk, which is a nice way to stretching out the levelling curve and stopping you from maxing out your abilities too early.

If you’ve set the world size to maximum, honestly, it probably still won’t be done by the time you’re finished picking a hero. But hey, there’s the practice dungeon to go through first! 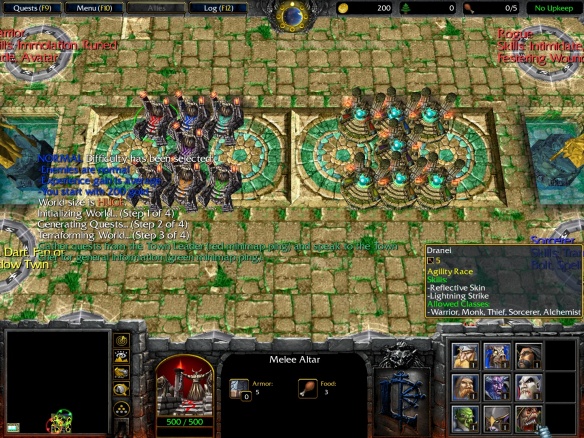 There are plenty of heroes to choose from, both melee and ranged. 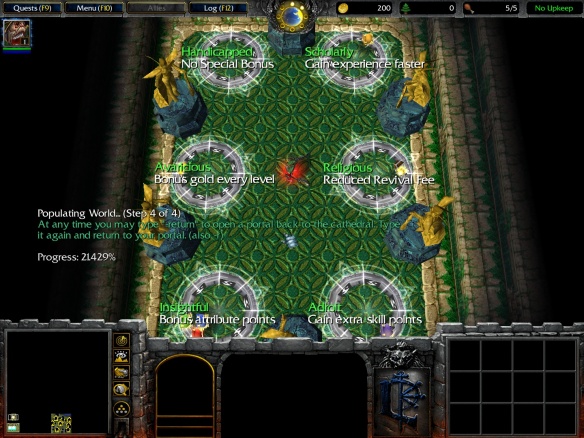 Extra experience points and skill points might be useful on a smaller map where the number of enemies is limited, but on Large or Huge you’ll naturally hit the maximum so money or extra stats are the way to go.

While the town area and the practice dungeon are fixed entites, once the world has been generated the town gate opens and you get to strike out into the jungle.

The jungle is effectively composed of a grid of “rooms”. Each room is a fairly decent size, a little bit bigger than your screen at normal zoom level, and contains a battle group of randomised enemies, and maybe some crates or barrels for looting. Enemies are drawn from the full breadth of the WC3 bestiary, though there is one interesting twist — each enemy unit is assigned to one of several “tribes”, which gives them various different bonuses.

The enemies are mixed with wild abandon — you’ll as likely find Mur’gul fighting alongside Renegade Wizards as Facekess Ones. So too are the tribes assigned randomly. I’m on the fence as to whether this is a missed opportunity or not — on the one hand, the mad mixing ensures each encounter is suitably varied, but on the other, the disparate species thrown together makes the fiction feel less coherent. (To be fair, we’re probably not playing a map like this for the fiction.)

The tree walls in use are scaled up from normal so sometimes it can get a bit hard to see what’s going on.

Of course, one shouldn’t head out before talking to the mayor about quests. Quests all share the same format: somewhere out in the wilderness, one of the rooms contains an objective. As an action-RPG this naturally tends to involve killing something a bit bigger than normal, but there are some other fun additions — one sees you searching for treasure that turns out to be Fool’s Gold, and another has you trying to find the farmer’s prize sheep from a herd of identical-looking animals.

There is one main quest objective that is consistent, which is not explicitly signposted but which you’ll inevitably find some way through your wanderings. This unlocks a second area of procedural wilderness that contains harder enemies and a final objective, which leads to a final boss fight which is again hard-coded. Annoyingly, the final battle doesn’t scale to the size of the map, so if you’re playing on a smaller world you are unlikely to be able to win and finish the game solo. (Enemies do not respawn in the wilderness so there is no possibility of grinding out the deficit.)

I have never tried leaving the town before speaking to the mayor, I have no idea what might happen.

Quest rewards are suitably varied too, often giving permanent boosts along with cash or experience.

Have I always dreamt of making my own map like this? Well, of course. I think the format is a great foundation but it’s dying for more development, more systems to bolster the lonely wandering — an equipment system, a backpack for ferrying loot around, more flexible ability choices rather than specific classes, kill combos and at least a little bit of enemy respawning. Do I have the energy to tackle such a task? On the one hand, “how hard can it be?”, but on the other… No. No, I’ll settle for this as it is. Thank you very much, Polaris0082, whoever and wherever you are!