Earlier in the year, I decided that the wilderness areas of Baldur’s Gate were actually a good and enjoyable thing. I stand by that reasoning today, and look back fondly on that experience of replaying a game that really is a classic.

Except I’ve just been replaying Mass Effect, and it has areas that fulfil a similar function — “uncharted worlds”, optional planets you can land on which contain only side quests. The difference is that… they’re not particularly good or enjoyable.

Mass Effect is an epic space opera in the same way that Baldur’s Gate is an epic fantasy adventure. Both games rely on presenting a sense of grandeur, making your little party pivotal heroes in events of world- or galaxy-wide importance. Both games make their worlds feel bigger by adding extra areas outside the parts that actually matter, in order to disguise the fact that they are… well, finite video games.

So while you’re flying around the galaxy following the main plot, you can also choose to explore tens of solar systems off the beaten track, each replete with a number of planets to examine and a single one to land on for close-up action.

Seeing as Mass Effect is a reasonably proper sci-fi, the planets in its uncharted systems are described in suitably plausible detail. Tales of tidal locking, atmospheric composition and ring structure all contribute to the grounding of this universe in reality. I don’t know enough about planetary geology or meteorology to tell you whether any of it is more than utter bullshit, but it says enough of the right words in the right places to satisfy casual observation.

And there are enough planets with descriptions that you’re not going to dwell on any particular one for very long — if you, like me, are intent on consuming everything you’ll even start to notice similar phrases that come up again and again as the writers clearly started to run out of ideas.

If you hit the “land” button, you can’t cancel until you’ve actually hit the ground (via an unskippable cinematic) — so don’t hit it by accident when you wanted to hit Zoom Out!

At the solar system level, Mass Effect offers its first questionable diversion: you can “survey” planets to see if there’s a neat bonus in orbit or on the ground. Not every planet can be surveyed, and there’s no obvious cue whether or not it’s possible without clicking on one to summon its description.

Surveying contributes solely to a number of collection quests that appear out of nowhere once you’re given command of your personal warship, the Normandy. These are superficially curious — scavenger hunts for artefacts from galactic history, they could have been a great way to bring more lore to life without burying it in the Codex (a screen that is updated as you talk to people and find things but which is utterly optional and completely sidelined).

However, these hunts fail because they appear from nowhere and disappear as quickly once you’ve found everything. There’s no archeologist on the Citadel looking for these things, there’s no museum owner on Earth gasping for historical artefacts — yes, you get instant deposits of money and experience points so they are worth going after from a purely mechanical standpoint, but you’re never actually given a reason why. They are completely ephemeral.

I’ve surveyed more planets than THE ENTIRE ALLIANCE FLEET and I don’t even get a personal message from Admiral Hackett? Ugh!

Landing on an uncharted world in one of these solar systems is similarly anemic, and this is the true pain of Mass Effect‘s wilderness.

The wilderness areas of Baldur’s Gate are decorated with the same care as any of the main plot path areas — you can’t really tell how important (or not) an area is without exploring it, and most landscapes reward you with unique visual treats (like the lighthouse on the coast). The main plot itself is also broken up with these areas, as you need to travel across some of them (at least once) to get between the important locations.

The uncharted worlds of Mass Effect are entirely optional, so there’s no need to go to one unless you’ve been directed there by a side quest or are a completist who is compelled to harvest everything. This means they don’t really contribute to the pacing of the game — they don’t give you that sense of grandeur because they don’t break up your journeys to reinforce the sense of covering great distance. Choosing to explore one is a choice, and it’s one that is rarely rewarded.

It doesn’t help that the uncharted worlds have a very basic formula. You are air-dropped in a bouncy dune-buggy tank, the Mako, and get to drive freely around a large square of landscape. The map begins with a number of points of interest revealed, anomalies that you need to drive up to for a closer look, and while driving your scanner might reveal metal and mineral deposits to survey.

Whether it’s a crashed satellite or a mummified alien body or a metal deposit, you do the same old hacking minigame to retrieve whatever it is. As with orbital surveying, it could be some historical artefact that will contribute to your scavenger quests, or it might just be some weapon mods (yes, satellites that crashed decades ago can still contain cutting-edge tech. Whoops!). You get experience points and money and then… nothing. 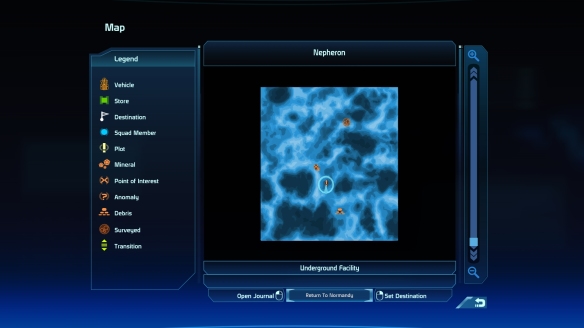 Since the landscapes offer no direction, you really do need the map — and it means you drive in basically straight lines between landmarks.

Visually, these planets are an annoyingly mixed bag. The skies are often incredible — huge stars and moons hang overhead and rings glitter, playing out the scenes merely described in the planet blurbs in glorious real-time detail. Look up and you will be rewarded with a unique and interesting sight (at least, if the planet isn’t shrouded in permanent cloud cover).

Look down, however, and you’re treated to nothing at all. The landscapes you drive across change colour and roughness, but that’s about it — these planets are heightmap terrains and that’s all. The few decorations that surround side quest locations stand out like sore thumbs on these otherwise smooth, undulating platters. You might find one of three civilian buildings, maybe a mine entrance, and there might even be a tank or a pile of crates under a tarp next to them, but that’ll be it — and any evidence of habitation will go no further than a tiny radius.

While the skies are often on fire with amazing effects, the landscapes themselves are always barren. 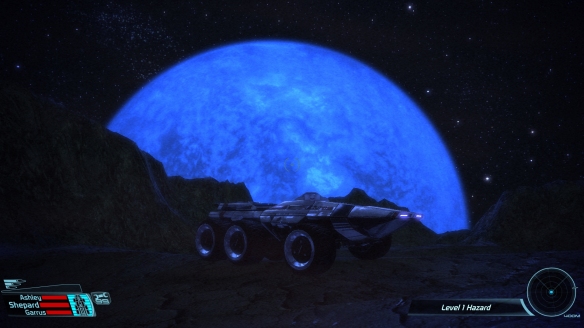 It means that driving around an uncharted world leaves a slightly sour taste in the mouth. I want to feel like a big space swashbuckling hero exploring the recesses of the galaxy where few have tread before, and these uncharted worlds promise a taste of that — but it turns out that space, even in finely crafted video games that have a lot to offer, is still big and mostly devoid of interest.

It smarts more because the worlds involved in the main narrative are lavishly decorated. Big rocks, cliffs, trees, and sprawling high-tech buildings guide you along the paths demanded by the plot: so it’s clear that the uncharted worlds are not barren because of technical constraints. A huge variety of decorations were available for use, and inside some of the bunkers there is clear evidence of very clever recycling of a tiny subset of models on offer. Imagine what those artists could have done with all the junk from the main missions!

This contrast between plot planets and uncharted planets is where I feel like they actually detract from the game. They come across as sloppy and unfinished in comparison, so if there wasn’t the budget to do them properly then I suspect Mass Effect would have been a stronger proposition without them being there at all. 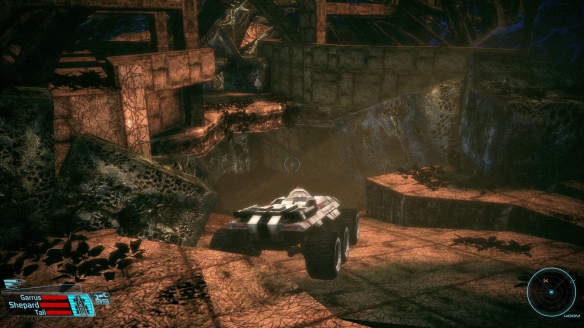 To me, this makes the solution obvious: cut maybe half the uncharted worlds and make the remaining half twice as interesting. There are too many uncharted worlds as it is, so this wouldn’t even degrade the perceived scale of the universe all that much.

If the planet’s description says it has a vibrant biosphere, put some fucking trees down. Add boulder fields, add sheer cliffs you can’t drive up by going sideways. Maybe put more than one side quest on some, maybe add some extra investigation missions into the main plot to break up its obvious structure. All I’m actually talking here is some rearrangement and redecoration, not even anything particularly drastic.

Luckily, despite its many other problems, Mass Effect 2 pretty much did do this — they dispensed with the Mako and scattered smaller but more focused scenarios around the universe, and brought many of them into the main plot by siting many of your team’s “loyalty” quests on them. Good work, BioWare!

While most of this conversation makes no sense, it’s got some hella good lines — unlike uncharted planets, which make plenty of sense but have no good lines.