For some reason, it has become a festive tradition that I replay UT2004. To the festive tunes of artists I never listen to at any other time of year, I will joyously frag my way up the singleplayer tournament ladder and… dream of how it could have been?

For the UT2004 singleplayer ladder has a “team management” mechanic that ultimately offers nothing but fires my creative juices right up.

If I Wrote… Unreal Tournament 2004

You’re right, UT2004 doesn’t have much of a story as it is, so this is me extrapolating a lot of meat from very simple bones. To be fair, those simple bones work very well in the original UT, where you just take each match as it’s given and each one gets successively harder. There is narrative in both games, though; but it is delivered in dribs and drabs of character biography and level description (unlike the cinematic ham-fest of UT3).

The point is that the UT games’ singleplayer elements at least try to paint a picture of a world around the tournament itself. The ladder is not an abstract set of scenarios to work through for the sake of points or personal challenge; it is the ultimate sport of a grimy future and you are within that world.

I don’t know why they added Techno-Egypt to their roster of environments, but I don’t care because it is glorious.

The UT2004 ladder builds on the original concept by structuring the game around managing a team. You must first fight through some qualification rounds as a soloist, before “your sponsor” is confident enough to stump up the cash to get you a team who will join you in the big money games.

What I always wondered is… Who is your sponsor? What is your relationship to them? When you begin the game you pick a character off the shelf and nothing changes but the corpse you see when you get blasted, but with some customisation options this would be the perfect setup for an RPG. Are you a scrappy nobody that got talent-spotted? Are you an ex-criminal like half the existing roster? Are you in it for honour and glory… or just the money? 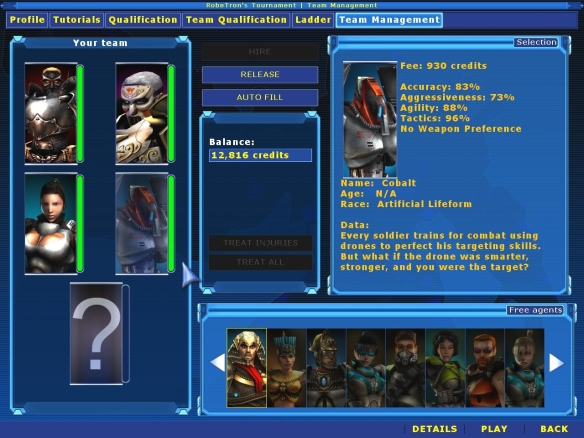 Cobalt is an absolute beast, and his team appears early enough that he’s usually the first to join me.

So I would want to make a real story of the game. Maybe your sponsor has an underlying beef with the Liandri (who run the tournament) and wants to fund a tournament champion to rock the boat (because corporate greed and corruption are core themes across all the blurbs). I’d want a good chunk of mystery and tension that could unfold as you worked your way through the game, so that whatever climax it amounts to has some narrative oomph to it.

Despite its lack of an obvious story, the original UT still manages to make the final battle against Xan Kreigor special. First, the final “Lightning Deathmatch” ladder increases the speed of the game and pits you against cybernetic enemies you’ve never seen before. Second, Xan himself is completely unique again, and comes with a voice pack you’ve never heard before. He is clearly a Big Deal and once you start playing against him you’ll realise why.

Even so, I prefer a final boss to come a little less out of the blue. I wouldn’t necessarily have you fight Xan earlier in the game (the super-rich and special teams would get to buy their way in above the qualifying rungs of the ladder, similar to how Britain and other core nations don’t need to qualify for Eurovision), so he would need to be an omnipresent figure in the narrative between matches.

The reintroduced sniper rifle is oddly unsatisfying and annoying to use. Replacing the sniper with the Lightning Gun for UT2003 was a bold move that fitted the universe nicely, no climbdown was necessary.

On the other hand, a well-rounded tournament ladder doesn’t actually require you to win every match to succeed. Harking back to the original UT again, some of the deathmatch opponents you face again in the last couple of missions mention a “losers’ bracket” that allowed them to recover from failure. UT2004 has a slightly less thematically satisfying approach; if you run out of money you get mysteriously bailed out and just have to earn money by replaying some qualifying rounds.

Basically, I’d wrap the tournament ladder in an open-ish RPG format. While the main plot requires you to Win The Tournament as usual, I would want to bring the characters of the other teams and their sponsors into some kind of interstitial plot area; a city hub where you’d wander around, trying to get sponsorship deals and recruit pals, maybe criminals trying to get you to throw matches for betting payouts; that sort of thing. Your actions in the arena would affect how the plot unfolded and the activities available in the outside world.

I still prefer the original pulse rifle to the Link Gun (looked and sounded way more powerful), but I appreciate the need to have a weapon that can repair vehicles.

Yes, I’d want to make your team-mates have actual relationships with you. Some would demand you beat them in a friendly match before joining. Others would just take the money. Some might come with grudges and baggage. Creating, you know, a selection of miniature soap operas to keep things interesting between matches, with effects that would spill into the game proper. Mass Effect 2 managed to get critical acclaim with this approach, providing loads of detailed, emotional character dramas that were sadly interrupted by one of the worst mainline narratives this century.

Another interesting but underutilised mechanic from UT2004‘s management area is “Bloodrites”. This is the ability to, after having fought a team in combat, challenge them to nab one of their team members for your own. While there is quite a large pool of basic-level people to hire, you can take big leaps by bloodriting the best peeps off other teams. Lauren of the Iron Guard, for example, comes into your world demanding more than 110 credits per match when the highest paid nobodies charge about 80.

I find that concept fascinating. Would a long-time opponent want to join your team? Is the rivalry friendly enough that they would come happily or play miserably until you let them go? Maybe they hate their team and are desperate to join you instead? (Or, going all mushy, their eyes met across a crowded arena?) I reckon this is a narrative goldmine.

How very dare you, Karag is MINE!

Of course we can’t discuss a flexible narrative without mentioning the Shadow of Mordor Nemesis System. Effectively a mechanism that enhanced enemies that beat you and made them come back for more with upgrades tailored to how you defeated them, I can’t imagine a better setting for a system like that than the Tournament.

Beating people hard enough could create grudges, causing them to harass you with challenges or outright corruption between matches and make them go mad at you within them. People beating you hard enough could be melded into a reason for the player to send out challenges of their own. Hell, considering the final enemies of UT were “reprogrammed cyborgs”, we could legitimately have your most irritating foe upgraded into a machine for a late-game showdown in the lead-up to Xan. You don’t even have to hand-wave character death and resurrection when you’ve got sporting wins and losses.

(UT2004 doesn’t even have this kind of mechanism and I still get mad when I see Malcolm’s smug face throwing canned taunts at me. Just imagine if the game actually leaned into this…!)

So yeah, that’s an outline of the sort of thing I’d like to do with a UT game. Keep the tournament core but slather it in drama, build up the setting and the surroundings and chase all those threads they only hint at in character biographies and level descriptions. This is one of the big reasons why I love the Unreal franchise — the gameplay is amazing, but the worldbuilding on top gives it the edge.

But since Epic are apparently never making another UT game ever again (let alone a true singleplayer Unreal), I guess I’ll have to build a tournament campaign in my own game…