You know that thing where gog.com offers you a DRM-free version of a thing for literal pocket change, and it includes all the DLC you never had the first time? Yeah?

Well, I hadn’t played Dragon Age: Origins for a few years and I was kind of in the mood so, £3.49 later, here we are. In playing it, I’ve remembered just how… well, broad it is. In order to manage your party of companions effectively there are a lot of decisions to be made about how to equip them, and though in the right doses that’s quite fun I feel that maybe Dragon Age has gone a bit overboard…

Okay, the first element of information overload is my own damn fault for buying the full-power edition: the inevitable deluge of mid-tier equipment compiled from various pre-order bonus packs and the like. A good RPG takes some time to settle into because of the inevitable complexity of all the systems; the basic DA:O introduces things very well with the titular origin prologue scenarios, easing you up from zero to basics before letting you loose to explore the depths — but that’s immediately thrown off kilter by the bonus equipment.

I mean, if I fill my character up with this stuff, is that cheating? Will it imbalance the game? This is some good stuff for a level 1 nobody. The answer is given sporadically: some items have attribute requirements, like the Blood Dragon Plate which requires 38 strength and so must be carted about until you have enough (but is usually hopelessly outclassed by non-DLC equipment by the time you get there). Other pieces of DLC equipment are sold by the travelling merchant that haunts your camp, which at the very least stops it from invading and disrupting the prologue.

(You can disable bonus packs in a menu somewhere, but coming in fresh it’s naturally hard to tell what’s legit extra quests and what’s just junk.) 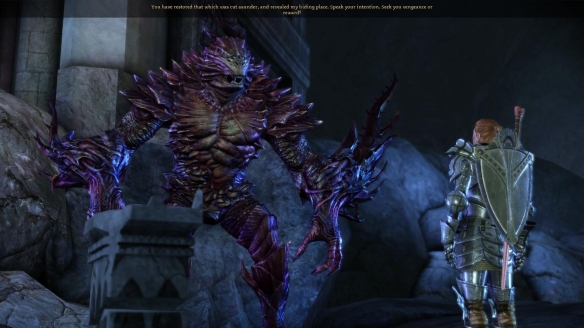 It has to be said, before we go any further, that I do love dress-up games. It causes me genuine pain when I have to discard a cool-looking piece of equipment for something that is numerically better but less visually compelling. Dragon Age: Origins has plenty of equipment to suit all ages and stages.

Equipment is generally good fun, because it gives you something to chew on in between the fights. Picking the best arms and armour from the loot is how you relax after a hard day’s dungeon diving and turn the abstract “yay I won” into a concrete “look how bad-ass my character is now”. Decisions can be difficult sometimes, but that’s okay, that’s what makes it interesting and ultimately satisfying.

The quantity problem arises in Dragon Age for me, not from the piles of equipment you’ll pick up along the way, but actually in the deciding where to put them (or not). Because although you carve about with a party of four, everyone you’ve ever made friends with sits patiently in the camp, waiting for their turn. 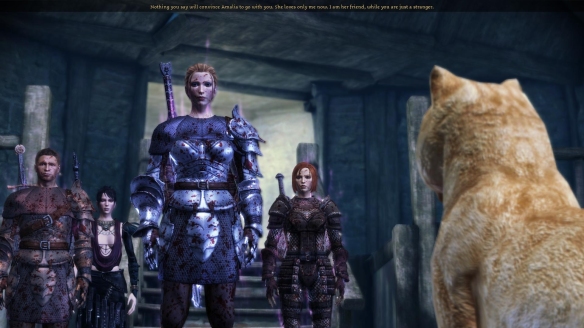 This chainmail, for example, doesn’t do it for me — but its numbers were not to be denied.

I think the intention is that you hot-swap characters depending on where you’re going, what challenges you might face. I don’t; I pick my three favourites and stick with them unless forced by a side quest. But because of those enforced outings, everyone has to be kept equipped for any level-appropriate challenge. With up to nine characters in your roster, that means every piece of shiny equipment has to be compared up to nine times before you can safely discard it.

There are a lot of considerations to make when choosing to equip an item or not. The further you go, the more complex the webs of enchantments are; plus, there are considerations like getting a bonus for wearing items all from the same set. The price of not equipping your team appropriately is, of course, difficulty spikes when you do have to wheel them out.

Contrast that with something like Morrowind or Skyrim, where you’re only comparing each new item once, against what your single player character is wearing right now. That means each item has the space to be more interesting, because no matter how complex the suite of enchantments and modifiers on both, there’s only one side-by-side check to be done. Repeating that another three times for your major friends is just about doable, but having to then continue to do it for a pile of characters you’re avoiding because you kind of don’t really care about them…

(See also: Mass Effect, where Kaiden still has his starting armour when you get to Virmire. Admit it, you do the same! Every time!) 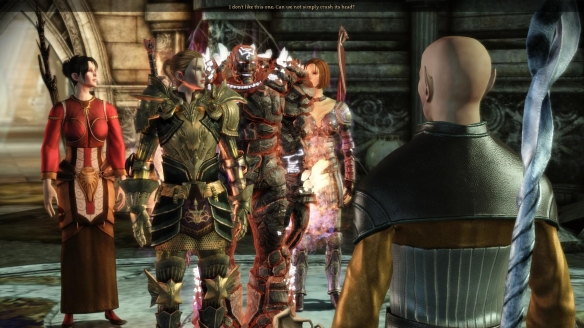 Luckily, King Cailin’s armour, recovered from Ostagar in a DLC pack, is both numerically superior AND sumptuous (I didn’t get a picture of the glorious full helm that goes with it).

Of course Dragon Age has more answers to this question. Two characters, your pet dog and DLC companion Shale the golem, have completely distinct and far simpler sets of equipment — only two slots each, to a humanoid character’s ten. Shale’s crystals are cleanly and clearly lined up on a linear scale, give or take slightly different elemental enchantments, and because only Shale can wear crystal growths, that is-this-thing-worth-using decision space is cut right back down to size.

Baldur’s Gate had similar answers, in that certain types of clothing were simply locked off for certain character classes; fighters can’t wear robes and wizards can’t wear platemail. I used to rail against this seemingly arbitrary restriction (your choice of education as a person wouldn’t affect your physical ability to wear a robe, would it?), but now I can see that it was a cast iron way of ensuring a decision on whether to equip or sell a new piece of kit was kept manageable.

(Funnily enough, there are very few arbitrary clothing restrictions in Dragon Age but plenty of physical ones — so yes, you can get to a state where your mages and rogues are also carving about in full plate just fine, unfortunately extending the set of decisions to be made again.) 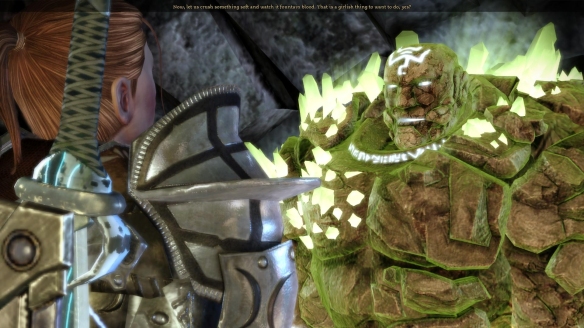 Shale also gets most of the best lines.

A party in Baldur’s Gate might be larger at six members, but as there’s no home base where unused companions lurk they’re effectively written off; you only worry about your party as it is right now. Swapping somebody out is in itself a momentous occasion rather than a regular occurrence, so the stress of doing so, along with re-equipping your new pal from scratch, is localised. (And considering that abandoned potential mates don’t level up without you in Baldur’s Gate, changing your roster might create a significant imbalance.)

Although, as a spawn of table-top Dungeons & Dragons, this decision space restriction of Baldur’s Gate‘s clothing might have been a happy side effect rather than intentional; at a tabletop game, each player controls only one character and so does not have to worry about what everyone else is wearing. Might make it easier for the team to divvy up the loot at least. 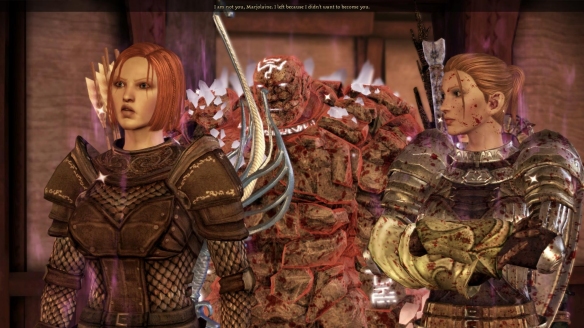 As a Rouge, Leliana annoyingly never quite has enough strength for the armour she needs to avoid getting utterly pasted in a fight.

So what’s the solution? I think it’s ultimately in the party hot-swapping: do it like Baldur’s Gate, make it a hard choice to take on a party member and then let you invest in them to the exclusion of others. This will mean missing out on some character-driven content, yes, but Dragon Age: Origins is still 40 hours long at a leisurely pace — missing one or two character loyalty quests won’t put a dent in it.

I could forswear this content myself, yes; nobody is forcing me to keep all these characters on and you can tell some of them to get lost. But the way the game is structured, it wants you to have everyone; it wants the dramatic ending battle to have your personal army rather than just your three besties.

And it most definitely wants everyone to be fully equipped, for those times when it forces a specific character on you. To do anything less is unfortunately to hit a road block, when your favourite tank Shale is forcibly replaced by plot-armoured Alistair. 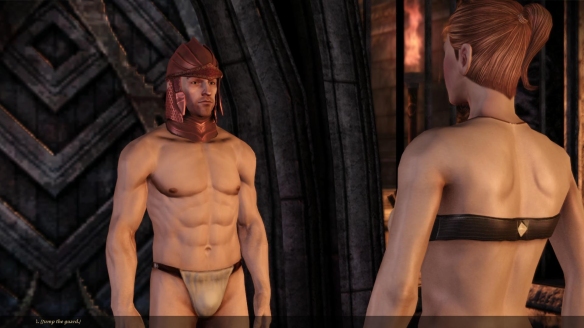 Well, that’s one way of avoiding the stress of choosing your clothes…