Drakensang is a lost gem. Back when the world was lamenting the lack of Baldur’s Gate-a-likes, Drakensang slipped out without much fanfare; I picked it up on a whim seeing it on the shelf in Game (remember when Game had PC shelves? Good times). Based on The Dark Eye system rather than Dungeons & Dragons, it nevertheless promotes the same ideals: a player-created character leads a tight-knit strike team as they vanquish evil in real-time-with-pause combat based on a tabletop system.

Okay, there’s no denying that its ruleset feels needlessly complicated. At its heart, D&D is based on rolling a 20-sided die and adding or subtracting a couple of other numbers to determine whether something worked or not. The Dark Eye seems to have a similar basis, but heaps thousands of modifiers and counter-modifiers on top — which must be horrendous to use in the real world, let alone when you have a computer doing the number crunching for you.

I say it feels needlessly complicated because, ultimately, you can play Drakensang knowing that Higher Numbers Are Better and cheesing a little bit. But goodness me, you could get lost forever if you tried to digest half the rule tips and make genuinely sound tactical decisions.

So I have to admit that I’m not here for the rules or the tactical combat. I mean, I enjoy a bit of tactical combat, but not too much; I’m a rubbish tactician and strategist and prefer to more directly move around and smash things over the head (or at least command an unstoppable ball of death to do it for me).

But then what hold does Drakensang have over me? 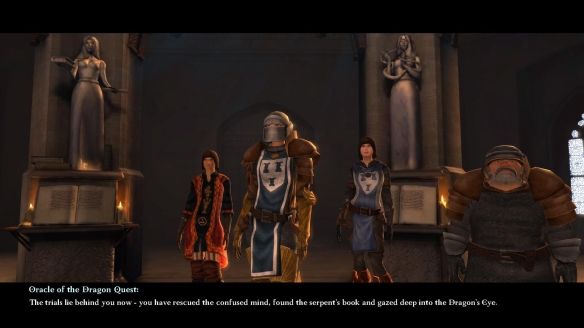 Your character’s life is guided by prophecy so there’s not much in the way of choice ‘n’ consequence going on here. 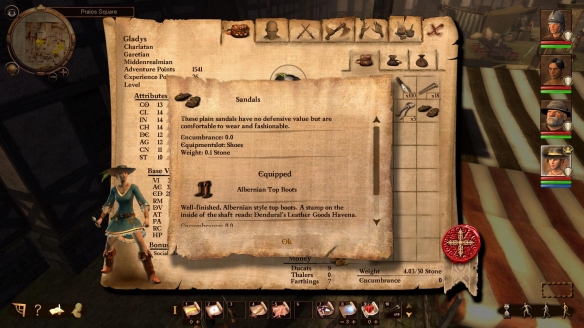 There are hundreds of dress-up options, which might be a contributing factor. The decision between stats and style has never been so difficult…

It can’t be in the quest structure, though there are a few peculiarities I’d like to point out. Mainly, it’s all very straightforward; you get your main quest that opens up new areas, and inside those areas there are side quests for bonus loot and fun times. All very normal.

There is one major side plot, concerning the murder of your character’s friend, that proceeds roughly in synch with the main plot. You advance it a bit, then come back later to advance it a bit more, and so on; the characters involved are fairly up-front about this so it’s not a surprise (“I have no jobs for you right now, come back later”). That’s also fine. 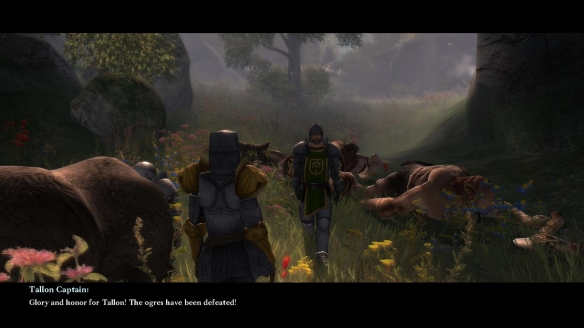 That’s right, stride in and announce victory after my team took the baddies down without you.

But there are a couple of side quests that dangle unsolved for… half the game. The alchemist Aurelia, for example, is encountered once you reach the hub city Ferdok and asks you to find out what’s wrong with one of her recipes. You need to find an expert alchemist to work it out; fair enough. You know where that expert alchemist is? About two thirds through the game. That’s 5 or 10 or maybe more hours later.

To me, a quest like this is equal parts fascinating and horrifying. I pride myself on being a thorough person, so when I get a side quest and cannot for the life of me find the solution, I start to worry. It doesn’t help that progressing along the main quest locks off areas; once you’ve cleared a place out, leaving it means you cannot return. What if the answer to that quest was in some corner of that map that I missed? Quests confined to a zone only fail after you’ve clicked to leave it for the last time (and yes, maybe I am a bit lax on the old quicksaving front). Aieeeee!

On the other hand, maybe that sort of quest is to encourage traditionally less-thorough players to be more thorough. If it induces nailbiting worry in me, maybe it could tease some extra engagement out of others? 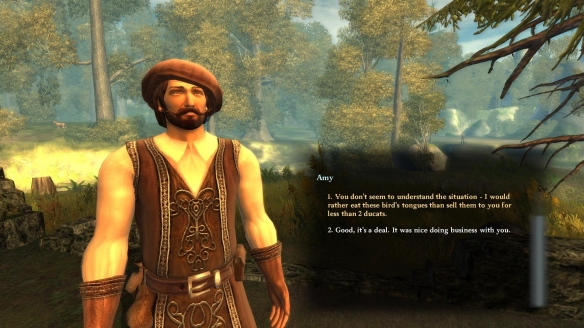 If you refuse to sell the Candied Kosh Bunting Tongues to this man, you can carry them around for half the game. I think the best price you can get is 20 ducats.

My love definitely does not stem from the setting, which is extremely traditional. Elves live in the forests; Dwarves live under the mountains; dragons are supremely powerful and evil but now basically extinct; orcs, ogres and goblins make their obligatory appearances… You can’t deny the long shadow of Tolkein is in control here.

The levels are often spectacular, though. There may be obligatory sewer and swamp areas, but even the sewers have dramatically high ceilings (probably a happy accident of needing a lot of space to accommodate the camera, but we’ll take it). Things start to hot up in the Dark Forest; as the name suggests it’s a rolling woodland, but once you complete your quests under the canopy you climb a massive ridge and get to look down on the world from a ruined castle. 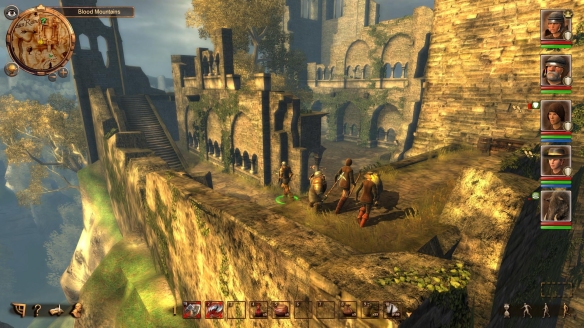 Blobby amoeba and giant lice are a nice break from fantasy staples (yes, of course there are spiders).

The Dwarven city of Murolosh and the Deeps of Gruldur beneath it are probably the crowning glory for me, though. Murolosh itself is a monstrous cavern, with a huge crane in the middle, lined with carved pillars. It’s a fantastic mix of dark age factory, temple and housing estate, all mushed together.

The Deeps of Gruldur, though, oh me oh my.

Chasing the main quest further underground leads you to an ancient, long-forgotten battlefield between the Dwarves and similarly stubby but more elf-like creatures called Grolms. The same tunnels that are sharp and clean in Murolosh are cracked and pitted here. Ghosts and undead remnants from the war linger, as they do in fantasy worlds.

It’s how the architecture evolves as you go deeper that’s the thing, though. The Grolms invaded the Dwarven territory and the first evidence you find of this is eerie brown cubes poking out of the walls, marked with sickly glowing green runes. The further you go, the more of these cubes appear, phasing through and eating up the original Dwarven architecture, until there is more corruption than stone visible. This is the evil magictech of the Grolms; silent, brooding, ultimately harmless but superbly atmospheric. (Well, it was harmful a few hundred years prior when the Dwarves got their arses handed to them.) 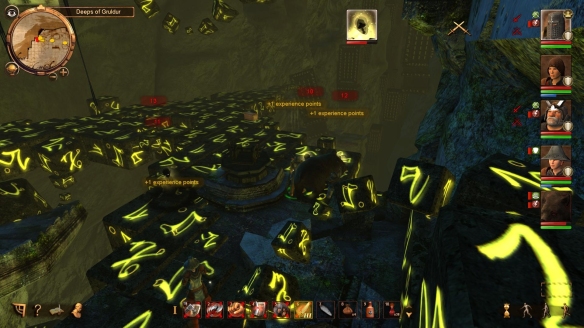 I guess the thing that makes me truly love Drakensang is simply its irrepressible good cheer. Maybe there are evil dragon-worshippers trying to amp up their dark god, maybe your pal was brutally murdered just before you arrived in Ferdok, but the sun is shining and everybody’s having a jolly old time of it really.

While Baldur’s Gate has the obligatory D&D alignment system that allows you to play as a bastard or a shining hero, Drakensang is content to give you a sunny romp killing bad guys and rooting out injustice. If it does let you be a dick to somebody, it’s only because they deserve it! In the mean time, the good people are all boistrously appreciative of you solving their problems, untangling the dense knots of side quests to bring happiness to every region that has the good fortune to be in your way.

Sometimes, I just want to go on a good old-fashioned adventure — and that’s exactly what Drakensang provides. 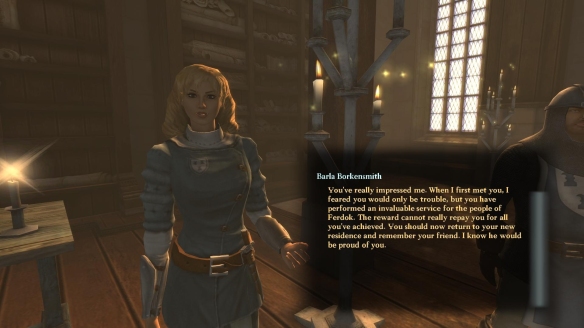 You’re right, I am totally amazing. 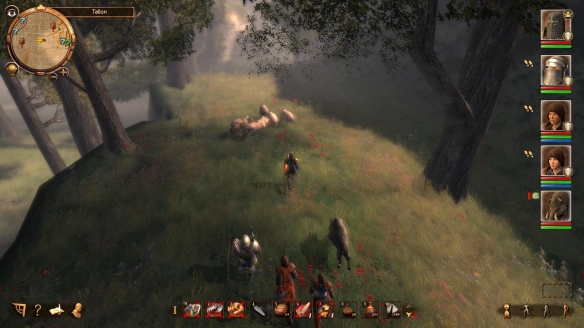 It has a quest where you herd pigs, it MUST be good!