I’ve always been bound to the desktop, at least since the GameBoy gave way to the PC and all the delicious level editors it brought. I’ve flirted with cute netbooks once or twice, and while they have their uses as ultra-portable units they are also not very capable. I have never before owned a real laptop…

But with the most productive time of the year upon us, and family obligations looming that will drag me away from my studio and its brooding powerhouse Helios, I felt that it was at last time to equip myself with something that has a foot in both camps. Something capable, but still portable.

Okay, maybe I’ve overstretched myself a bit on that “portability” factor. I’ve bought myself an Acer Predator 15 and it is huge. It is a monolithic black and red slab of technology festooned with LEDs. It weighs just under 4Kg and it barely fits in my rucksack. It roars when it powers on until you go into the boot menu to turn that off. It has a sub-woofer. You can replace the CD drive with an extra cooling system. It’s ridiculous and I’m terrified. What have I unleashed?

In keeping with naming all of my secondary devices after 80s synth instrumental songs,  I have dubbed it Overlook, after an understated Ultravox B-side from the Quartet era — to join the ranks of Astradyne (my first netbook), Airlane (current laptoblet), N4 (potato phone). (But not my MP3 player, which unfortunately resists being renamed so it is just NWZ-A15, the bastard.)

Of course I’m not really here for hardcore gaming, but I need the same kind of power for full-fat Unity and Visual Studio 2015 and all the other delightful gubbins I juggle as I work. (Well, apart from Paint Shop Pro 7 and Milkshape 3D, which even Astradyne could run comfortably). Instead of being relegated purely to writing and modelling duties over the festive period, I’ll be able to keep on at full speed on the game itself. Ach, yes, and maybe play a few things from after 1998 too.

I suppose the main tipping point that’s pushed me over the edge into laptopland is that my game is finally starting to look like an actual game, and not just a collection of janky sub-systems. I’m sure say this every year, but this time, I want to have something playable by the end of the festive holiday — something with a start, an end, and a scoring system. It doesn’t have to be varied or brilliant, it just has to have a defined goal. I need to be able to keep on this while away from home.

I have booked a solid three weeks off work in which to accomplish this. How hard can it be? 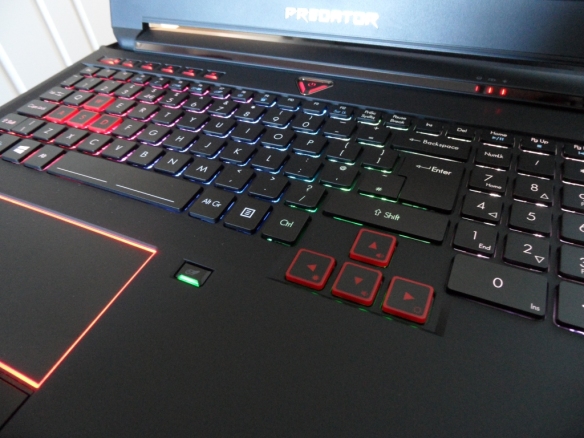 Who needs crimbo tree lights when you have a keyboard and trackpad like this?

The second motivator for getting a laptop is to get stuck into the community. I’ve been working on this thing completely alone in my own echo-chamber for a good three years now and am still chugging along making exactly the same game I set out to make all the way back. It’s got consistent artistic direction, but it’s also a boring and lonely and uninspiring way to work. There’s only so many times you can attempt to discuss game development with your family and watch their eyes glaze over before it starts to sap your will to live.

So I’ve recently been ramping up my attendace at local Edinburgh-based events, like the IGDA Scotland evenings and GameDevEd meet-ups. Today, I took Overlook for its first live outing to the edindies crew and it lasted about three hours of me scratching my head over vector mathemagic between Unity and Visual Studio before complaining about needing a charge. (And I think it’s only drained that much because I attached it to the free wi-fi and Windows 10 seems to have sucked up one stonker of an update. “Your PC will restart several times”… thanks?)

I’ve also been to the game-demo pub night Games Are For Everyone a few times and it has been my dream to put up a stall and show my wares at one of those ever since. Which, needless to say, I could not do without a powerful laptop capable of running my ill-optimised folly. Although the usual fare at these things seems to be split-screen multiplayer, I reckon I can lure the punters to the singleplayer with a high-scoring leaderboard — and the promise of me buying the winner(s) a drink at the end of the night.

So if you also frequent the Edinburgh gamedev community, then watch out — because Rao Dao Zao’s gonna be comin’ right atcha!

And to do it, he’ll either acquire rippling upper-body muscles from lugging this beast around or have to — horror of horrors — work out how to use buses.