Gosh, it seems like yesterday when the final part of the Starcraft II trilogy, Legacy of the Void, came out. Then, just when it all seemed to be over, they dangled a new carrot: the carrot of a bonus campaign, concerning everybody’s favourite stealth operative Nova.

Although I’ve mostly enjoyed playing SC2 as an actual RTS, the dream of WC3‘s Rexxar action-RPG campaign has never died. What with Nova: Covert Ops appearing to focus not on an army but a single character, I dared to think that promise might finally be fulfilled.

Medium answer: it’s Just Another Terran Campaign, except cut down to be as anemic as the Protoss prologue.

Long answer: “More of the same” is kind of fine. I never had any fun with the melee missions of WC3 at all, having replayed those campaigns (excluding sweet, sweet Rexxar) barely twice. SC2, on the other hand — or Wings of Liberty at least — I’ve re-enjoyed on four or five occasions. So, okay, it’s Just Another Terran Campaign, but that still means all should not necessarily be lost… 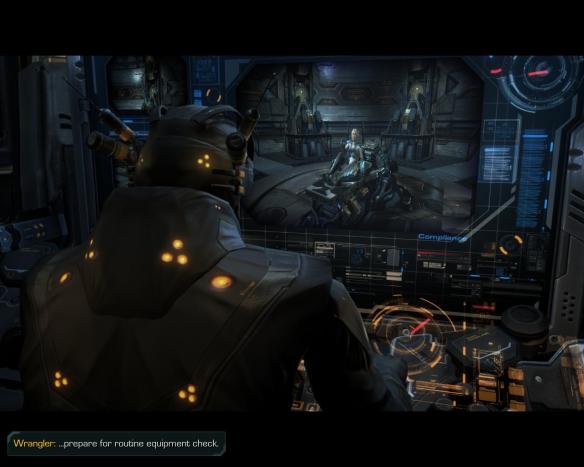 There’s nothing routine about a containment cell with crazy robot restraints… nor having so many lights on your uniform.

Nova has been trapped, her memories wiped — oh no, it’s a facility escape map! Not a particularly big one, but I suppose this is only the first mission.

At this point Nova has her perma-stealth suit so she’s completely invisible to all enemies except other Ghosts. Rather than the traditional radius of detection, however, these units have sight cones — stay outside the cone and sneak by undetected, fall into one and every basic marine and his aunty will open fire on you.

The sight cones occasionally swing around, but everyone seems to remain unperturbed when troopers outside those cones spontaneously die around them. You can get away with that when you’re using security cameras on fixed tracks, but surely these highly trained operatives would get suspicious and start looking around? Alas, no, it’s just another linear obstacle course with little depth. How hard would it be to make the guards get agitated and unpredictable when murders happened, to encourage you to truly sneak rather than just kill everyone in whatever order avoids detection? Hmmm. 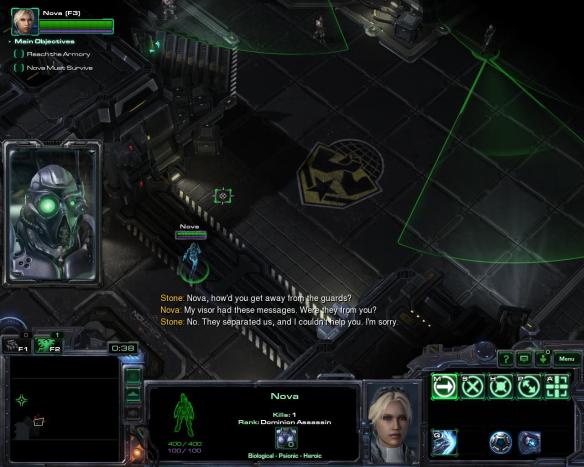 It then finishes off with a little infinite-runner type section, with Nova on a jet-bike sniping at pursuers while avoiding civilian vehicles. It’s only a two-lane highway so again the implementation is pretty shallow, but it was a pleasant surprise after I expected the mission to just end. 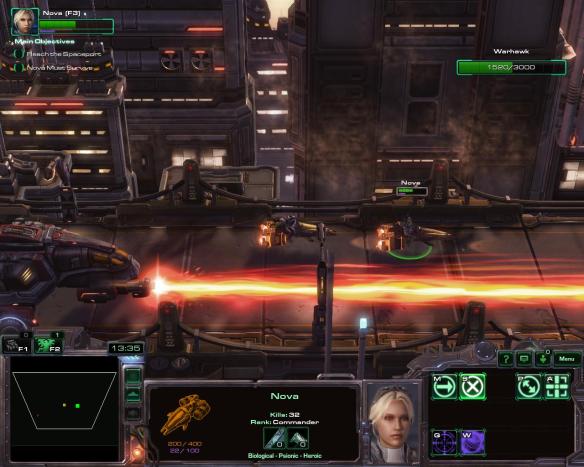 Top marks for lasers, at least.

Yep, totally back to basics. After the opening mission was a dungeon crawler I’d kind of hoped the campaign would continue in that vein, but we are quickly catapulted right back to zero with a fresh Terran tech tree that can only train marines, reapers and marauders. Since Raynor’s Raiders got subsumed into the new Dominion, couldn’t we inherit all their cool stuff and start on a high? Ach, at least they’ve tweaked some unit models and portraits if not given us all-new cool stuff.

After a brief interstitial cinematic where you can choose Nova’s equipment (i.e. in-game abilities) from… a very limited starter set of options… you get plunged into a very traditional defence mission. There are cliff-lined canyons, you have cliff-jumping Reapers that can lay mines, there are very convenient spots for bunkers… Okay, Nova gets jetpacks so she can go up and down cliffs too. Woo? 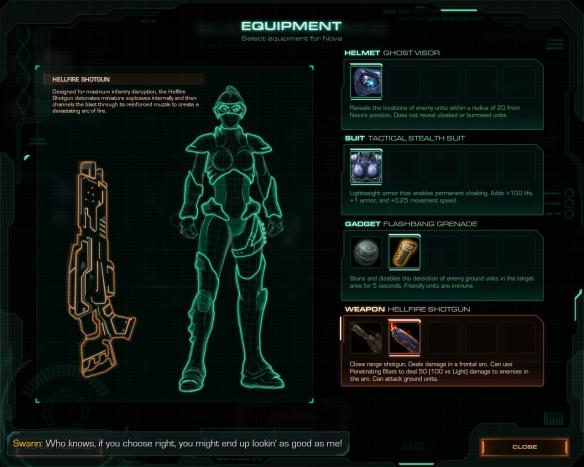 Remember when you could change equipment during a mission, with items and inventory slots? No, me either. That would never take off.

What seems most evident by this point is that Nova is not the bad-ass we were expecting. She comes across as a bit lost and listless, compared to Wings of Liberty where she stabs Tosh in the back, pushes the body away and then lounges in his chair. The allure of Nova is the same as that of Han Solo — she’s sassy, cocky and fearless and she traipses around the galaxy having adventures and getting into trouble and relishing every minute of it.

Here, though? Banterous engineer Swann reprises his role with gusto and all Nova can do to his jollity is go “is he serious?”, like a mopy teenager having to hang out with her so uncool parents. Whereas, I reckon the proper Nova we actually wanted to play would have rolled with his banter and sassed him right back. Her voice is also subtly different and lacking oomph; I’m not sure if it’s the same actress just phoning it in or a new one who hasn’t quite settled into the role yet. 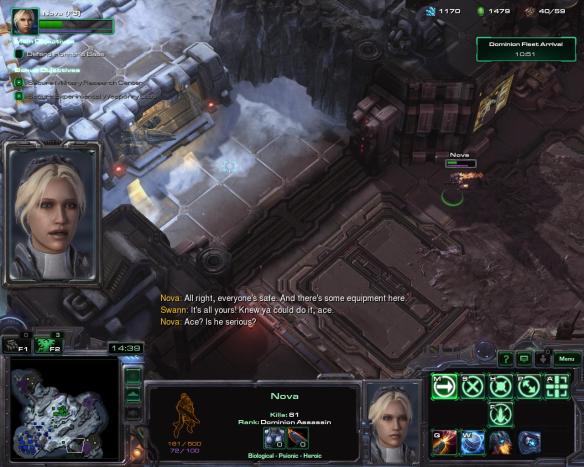 It’s hilarious when the stuffy Protoss are bemused by Terran turns of phrase, but this awkward “ugh” just doesn’t suit Nova at all.

This one is a bit more like what we want. A good chunk of melee action with some decent equipment (hellbats and siege tanks, hopefully promising a faster kit ramp-up than one-unit-per-mission) is followed by another dungeon crawl, cutting the mission into two discrete sections.

Perhaps the most annoying thing about mission 3 is that you are given your own super-stealth spaceship just before it begins — fine, if you’re not going to give me an action-RPG onslaught, then at least give me all the good stuff from Wings of Liberty, the bar and the mercenary contracts and the engineering bay upgrades and the lab upgrades… But no, it’s nothing more than a plot device, and all your unit configuration is done on the briefing screen.

The cliff-hanger ending further confirms that Nova’s personality has been totally nerfed. The villains trigger a super-evil event for reasons yet unknown, and Nova goes all wide-eyed and shocked — but no, I don’t think that’s what Nova would do. I think she’d frown and say “we’ve got work to do” or something scathing and harsh. After all, she’s the Dominion’s top Ghost ever — she’s probably been involved in far worse, or at least been involved in enough to be completely desensitised to mass murder. (Let’s face it, cracking under pressure doesn’t save worlds; you’d have to be hard to be a Ghost. Sure, I’m all for emotional depth, but this seems way out of place with the existing setup.) 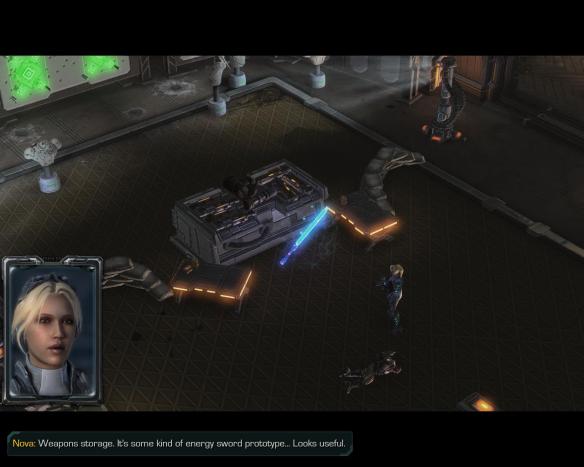 “Looks useful.” Oh come on Nova, we know you can do better than that. Something about a slice of the action, maybe?

Okay, it’s the first three missions of a campaign of nine, so there’s still ample time to recover. All three packs will arrive “before December 1st”, so we’ll have to see if the campaign warms up a bit once it gets into its stride — certainly the third mission is probably the best, so the trend in mechanical design might well continue upwards, even if the narrative and characterisation are so far disappointing (yes, even by Blizzard standards).

Since this requires the exchange of actual money, then unless you’re a total die hard Starcraft fan I’d suggest you give this one a miss. I’m well on board with the concept, dropping pure singleplayer content in isolated chunks without the need to revolutionise multiplayer that comes with a full expansion pack, but the content itself leaves a lot to be desired — at the moment it is gentle fun but pretty forgettable. 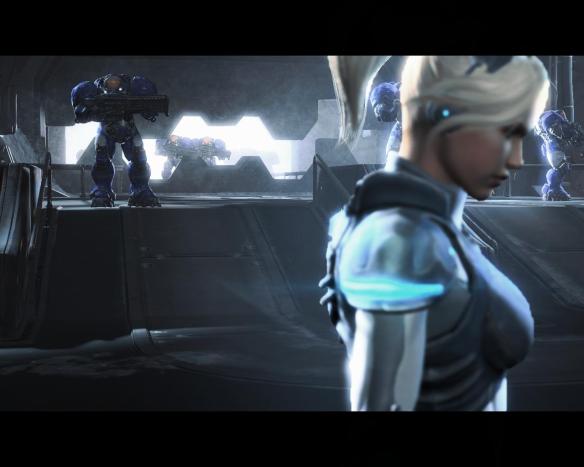 Look wistful, Nova, you’ve been re-cast as somebody else.