Darksiders II is not quite a prequel, and not quite a sequel, because it’s set between the opening prologue of Darksiders and the actual game. I think.

I’m also not sure that really matters.

Okay, mechanically, it is definitely a sequel, though one that’s darted off in a slightly different direction.

While Darksiders was almost purely an action game, with minor RPG elements to help it along the way, Darksiders II has opted for a far more RPG-heavy route. The combat is still the same, battering enemies by chaining together a variety of ludicrous attacks by pressing buttons in the right order, and the world is still replete with environmental puzzles and platforming challenges to traverse as you go. 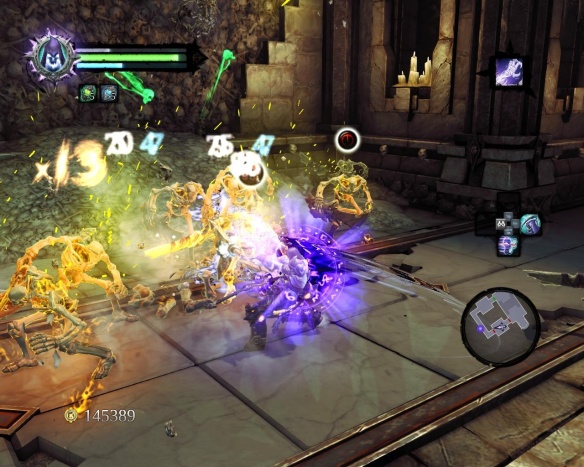 The platforming is a bit more developed, less reliant on just introducing new gimmicks (I mean, by the end of Darksiders you had your own knock-off Portal gun), and more focused on a strong core experience of climbing, wall-running and jump-timing.

Combat encounters do feel a lot more frantic too, with most battles being against hordes of easier enemies rather than fewer enemies that require careful timing — so while chained combos and dodging are still the order of the day, their deployment is less considered and more reflexive.

Above that stuff, though, there’s a whole new dress-up layer. This time we pilot Death instead of War and he can wear a decent selection of different weapons and armours, complete with enchantments and stat boosts and all that goodness.

Though no matter how much kit you acquire, Death will never wear enough to cover up his rippling lilac pecs.

All of this generally makes combat pretty forgiving. Death’s responsiveness means it’s easier to get away from those life-ending boss blows with less time to spare, and his first spell steals health along the way to keep your life bar topped up, and you can load up on equipment that suits your style. That bigger margin of error means that a single misstep will generally not ruin your day, and so absolute perfection is not required to progress. Basically: phew!

Optional dungeons and boss fights are available to up the ante a bit, but they’re optional and the increased focus on equipment and levelling means difficult side quests can simply be left aside until you’re quite ready for them. (Indeed, many optional dungeons require abilities acquired miles further down the main quest path before you can unlock all their loot.)

The addition of boss health bars is welcome: now you can tell if your attacks are useless or if you still need to work out its vulnerability, and you can tell how long you need to keep going for.

The game begins with Death vowing to clear War’s name — War being framed for triggering the apocalypse before its time in Darksiders. While war was imprisoned awaiting judgement for a hundred-odd years, Darksiders II takes place.

Except it lacks drive. The vague need to clear War’s name is given as Death’s motivation, but in order to proceed he needs to do a whole heap of basically unrelated stuff for various gatekeepers — diving down beautifully crafted ancient ruins and learning and growing but ultimately doing nothing relevant to his goal. All of the exposition and plot concerns the Makers and the Corruption (with a capital C) that besets the universe — which eventually does turn out to be personally relevant to Death, but only after more than ten hours of play time.

Despite being agents of balance, neither good nor evil, War and Death are both actually top blokes.

So in those early stages, it’s easy to forget why you’re even bothering. The only thing that carries you forward is the relentless need to overcome the challenges put before you. The primary objective of the first game, on the other hand, worked on multiple levels. Sammael making you kill the Chosen functioned as a mechanical gate to get you actually playing the game, but also functioned on a personal level in that it was the demons that framed War in the first place and he wanted revenge.

Whereas, in Darksiders II, the obstacles placed to guide you into all its myriad chunks of gameplay generally feel quite arbitrary: things that are somebody else’s problem passed onto you solely to justify the next dungeon. 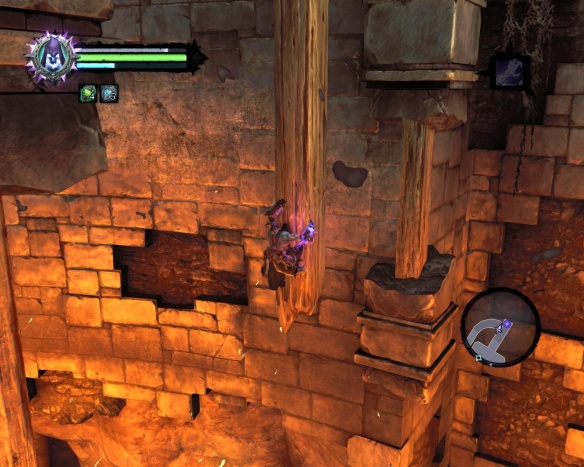 Don’t get me wrong, the dungeons are lovely — but some more reasons to progress would have kept them lovelier.

Which is why I wonder whether or not Darksiders II is actually a sequel at all. The first game ended with a massive sequel hook to the face, War putting on his best “this is only the beginning” grimace and cutting to black. Darksiders II does not follow on from that in the slightest, and it uses the War-was-framed device in only the most tangential ways — as a convenient sop but little more than that.

It’s a shame because overall I really like what they’ve done with the game; it just feels like they had a whole heap of gameplay and not much of an idea how to tie it all together. The plot does function, but only barely, and any time refers to the first game it feels faintly forced. If they’d focused solely on the Corruption angle and the personal and mythological conflict that turns out to contain… 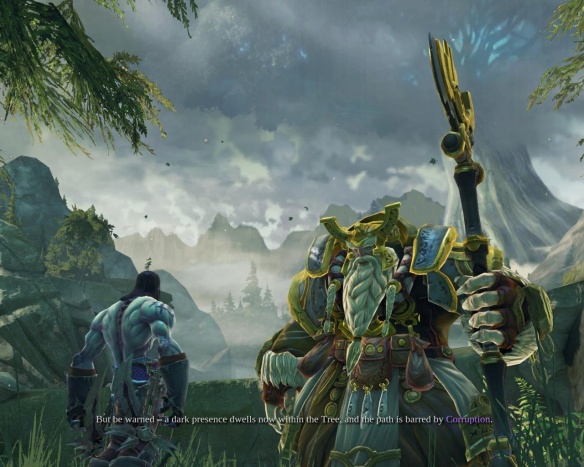 Say what you like, naming your villain Corruption is pretty lazy. Also I keep reading the word in Robotnik’s voice with long, rolling Rs.

All of this comes with quite a big shift in tone too.

Rather than the demon-infested post-apocalyptic ruins of Earth, after a brief grimdark opening the game drops us in the mountainous, leafy Forge Lands. Mostly bathed in pleasant sunlight, it’s covered in monumental ruins gently softened by time and foliage, only occasionally blighted by the molten black rock and sickly yellow crystals of Corruption.

Coming from the boisterous grimdark of Darksiders the more calm and reflective approach again seems slightly out of place. The exploration of ancient tombs and temples is more reminiscent of diving through the Dwemer ruins of Morrowind, where you are always alone but for enemies and maybe the sound of ancient gears creaking, than it is of the stylised gothic bombast of its predecessor. The second half of the game in the Land of the Dead brings a little of that back, and there are still the more bonkers details like giant spectral hands tearing open treasure chests for you, but ultimately it’s still quite… lonely.

Is… Is there anybody there?

Then again, if the fighting is more frantic, maybe that loneliness is necessary — to create more relaxation time to balance the more intense rushes of battle.

Even so, the presence of The Watcher in Darksiders, as your constant companion and mentor, gave the game much more opportunity to talk throughout the more meandering levels, to keep you reminded of why. Yes, Darksiders II offers you conversation “trees” when you’re in town rather than tinned cinematics, but this seems to serve only to overload these parts with exposition rather than spreading it out — between moments in town are gulfs where the narrative driving forces start to slip away.

Overall, I do like it, possibly even love it, and there is a lot to like. I’ve been reworking this review for a couple of weeks now and the game has pulled the rug out from under me at least twice — I kept thinking I was approaching the end and then it turned out I was barely half-way through. Indeed, I am now suspicious that there’s actually another two thirds of the game still to go. As a romp of an action-adventure RPG, it’s the dream come true: vast tracts of really fantastic combat and platforming gameplay spread across multiple dramatic, vibrant worlds.

The only downside is that there isn’t quite enough narrative to sustain that vastness. The likes of Morrowind pad their worlds out with chains of side quests and endless local lore and distractions, but Darksiders II is pretty much all business. But, hell, it’s still got time to prove me wrong again.