Well, maybe it’s poetic justice that Blog 666 ended up being about vampires. I take pains to avoid games about vampires because I generally find vampirism annoying; vampires are always horrendously overpowered and don’t make any ecological sense… But everybody else seems to be obsessed with them so they’re bloody everywhere. In the grim dark of the future– at least it’s not zombies, right?

On the other hand, the blurb for Blood Knights said “from the makers of Venetica” and, to be honest, if there’s anything that’s going to stop me from poking fun at grimdark blood-driven fantasy settings it’s going to be an oddball German RPG.

It’s not really an RPG, though. I mean, there are experience points and there is equipment to be collected, but these are meaningless without the ability to digress — Blood Knights is 100% linear, and the only way to change your course is to just walk past a chest of loot instead of opening it.

That’s not necessarily a bad thing, but it is an interesting thing. The thought that always comes to my mind is simply “why bother?” The combat would be as fun without the upward trend of experience points, because more powerful enemies keep pace with your improving abilities and equipment so nothing actually changes.

Experience points and equipment work in more open games, where you can choose to tackle a challenge beyond you with skill and cunning, or head for some easy money well below your grade, or just change your play style for shits and giggles — but Blood Knights does not offer you that. There’s a finite amount of experience in the world and, barring a few platforming challenges you might be unable to complete to get the odd extra bit of loot, you’re going to acquire precisely all of it as you progress through the story.

There are no health packs between battles, there are impaled people whose blood you have to suck. How gritty!

The inventory is actually quite good, controls aside; ‘scrapped’ items are greyed out and immediately sold on talking to a shop, no fuss. On the other hand, it only takes damage into account for comparisons — I’d rather have those enchantments than do a tiny bit more damage, thanks.

So, fine, take it as an arcade action game and just take the RPG stuff is your stride. The story concerns Jeremy the vampire hunter, who gets “bonded” to an actual vampire during a last-ditch mission to save the world from vampiric destruction (of course). Then he gets turned into a vampire too. Whoops.

Ostensibly a co-op game that should have the two protagonists fighting side by side, as a singleplayer you get to swap between them during gameplay (because having the uncontrolled one perform autonomously under AI control would be too much work). One uses swords and one uses crossbows, so each is a bit different to play and some platforming challenges might be optimised for one or the other.

Jeremy dual-wields swords; he can jump around and slash and… that’s about it. Alysa dual-wields crossbows; she can shoot and throw grenades so she’s immeasurably more capable than Jeremy, being able to run around and avoid attacks while still dealing damage, plus being able to activate out-of-reach switches.

To compensate, Alysa is… a much worse vampire. She has to spend skill points before she can suck people’s blood during combat, whereas Jeremy can do it immediately. (Is this a comment about humans being the real monsters?) 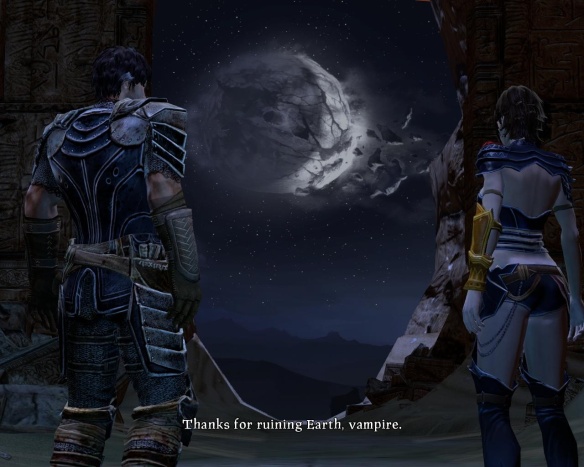 Fucking vampires, am I right?

The narrative has pretty much nothing going on beyond its very basic quest to Restore the Balance, except that most objectives are prefixed with the word “blood”. There is some half-hearted tension between the two characters, of course, but there isn’t enough of it to make it particularly engaging, and what there is doesn’t flow very well.

Indeed, it reminds me a whole lot of ArcaniA. A good chunk of the dialogue is a bit janky in just the same way, where entire phrases are conspicuously repeated and some lines don’t quite slot together — like every line was translated independently of each other, lacking the context that would produce a natural conversation at the other end. Jeremy also has suspiciously similar hair and facial features to the nameless hero of ArcaniA… Although the two games are apparently made by completely distinct developers there’s a little too much similarity in style and implementation to dismiss. Some developers moved company or just followers of the same fashion? Hard to say. 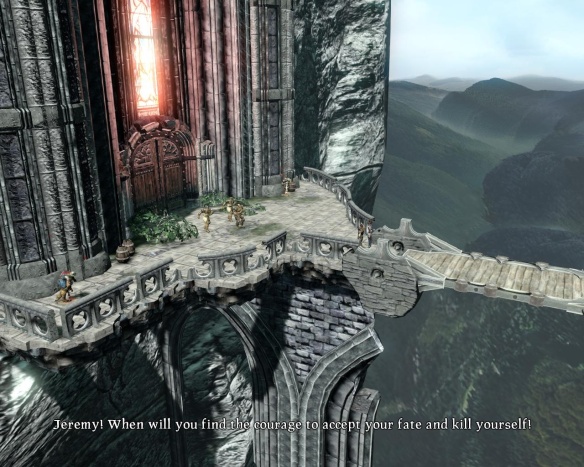 The dialogue may not be perfect but you really can’t argue with the scenery.

… though you can argue a LOT with the clothing.

Blood Knights actually has a control scheme I don’t think I’ve encountered before. It’s somewhere between Sonic Adventure and an actual 3rd person action scheme; rather than mouselook, or having the camera tethered to your character, the camera is on rails and follows behind as you go forwards. Presumably this is optimised for shared-screen co-op rather than singleplayer adventuring.

The mouse controls attacking and, if you’re in ranged mode, aiming too — but movement is locked to WASD and, yes, no way to change the bindings. It’s obviously designed primarily for a controller, but the mouse and keyboard controls have definitely had plenty of thought put into them too, even if it’s not quite enough. The cursor is often present, especially in inventory screens and whatnot, but with the WASD movement being dependent on the camera orientation the awkward platforming could easily have been made more natural by giving full power to the cursor.

To be honest, I gave it a shot with the XBone Controller For PC and I actually felt the mouse and keyboard controls were much better. The analogue stick didn’t really improve directional movement in the end, and the choices of action buttons otherwise were a bit annoying. So, uh, top marks for a slightly dodgy port being better than the primary target?

The rail camera is actually really annoying for Alysa, as her ranged attacks frequently take her enemies off screen or hide them behind things. GOOD THING SHE HAS AUTO-AIM, RIGHT?

So, am I going to stop making fun of blood-driven fantasy settings?

But Blood Knights is, control scheme oddities and shonky dialogue aside, a well-built and fairly amusing slice of life. It’s only about five minutes long so not one to pay a heavy price for, and maybe it would be “more fun in co-op” (sigh), but it worked well enough for me. It’s never going to excite high praise but as an arcade game rather than an RPG it goes down nicely.