Ah yes, the middle-tier title. Mechs & Mercs: Black Talons‘ name alone caused me to pick it out from the crowd as a potential crimbo target — I mean, everybody loves mechs and mercs are suitably sci-fi… As for Black Talons, well, that is the ridiculous tacticool part I can’t deny that I do enjoy now and again.

It claims to be a real-time strategy game, but clearly advertised a focus on persistent units between missions, so I was secretly hoping for something like a WC3 map gone nuclear. Which is sort of what we have here, but not entirely in the way I was expecting.

The game is about liberating a solar system from bad people over the course of a campaign spread sporadically across five planets, which is a pretty cool setup. It’s constrained enough that you aren’t fighting the infinite vastness of the universe, but it’s big enough that you can hop around and have a bit of scale and variety. The solar system has been blockaded and the only way out is for your mercenary company, the BLACK TALONS, to dive in and save the day. 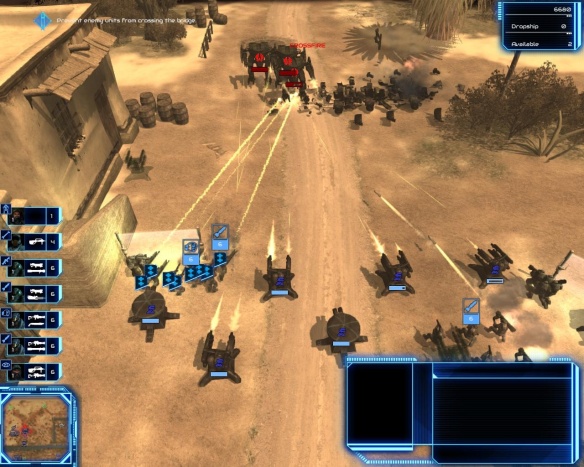 If in doubt, build a whole heap of turrets and hope for the best.

The reality is perhaps a little bit less than the dream.

Missions have varied objectives, like any good pseudo-RPG campaign. Attack this, kill that, defend the next thing. Each mission begins with as many people as you can fit on your dropship (which can be upgraded between missions), then may or may not allow further reinforcements as you acquire command point generators and landing sites. In that sense, it’s reminiscent of Star Wars: Empire at War‘s ground battles, in that each map is more like a tiny dungeon crawl than a true RTS level. There is no base-building, just you and your squads.

The difference here is that the lack of base-building (engineers and their turrets aside) is compensated for by far more involved unit mechanics. Units in cover shoot better and take less damage, while units on exposed ground take more. Enemies being attacked from two sides get caught in crossfire, while turrets create suppressing fire that reduces movement speed. It’s all about maths and dice rolls but it does add something extra to the more traditional RTS formula of attack-move-to-win. 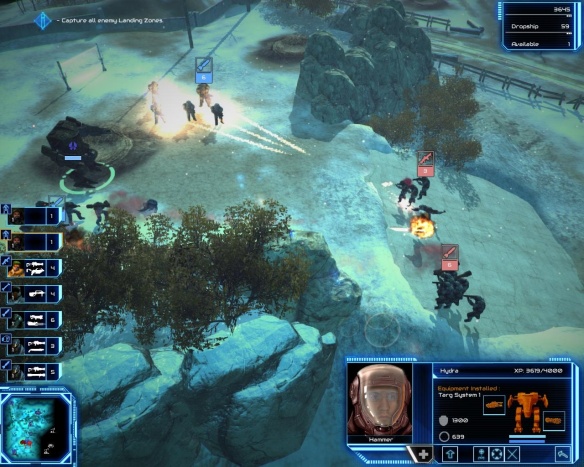 … okay, sometimes you get caught in the open and yes, I am playing on Easy.

On top of that, each unit is in fact a squad of up to six soldiers, united by some named Captain that gains experience points that can be used to improve them between missions. If all the soldiers in the squad die then the captain goes too, along with all the accrued benefits from levelling up — but if they survive, they can get better armour, move faster, and even acquire grenades and other abilities via perk trees. These perk trees are not dissimilar to those of, say, Mass Effect 3; they’re simple enough to be manageable across ten to fifteen persistent (but disposable) squads but varied enough to let you specialise different captains to fit your needs. 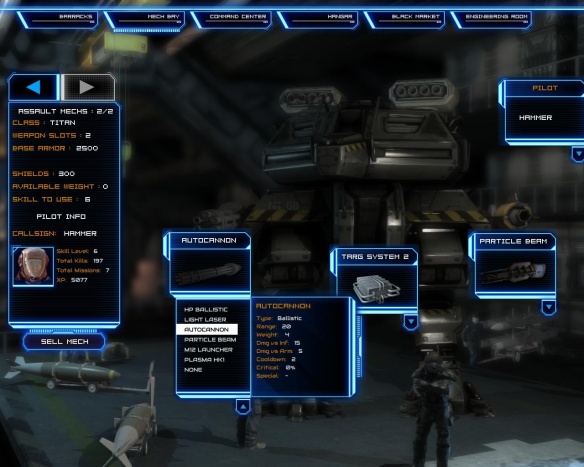 Mechs can be armed with up to three items assuming their weight can carry it, but annoyingly you have remember to reassign a pilot before every mission or else you can’t summon this mech as a reinforcement.

It starts to break down because position is so extremely important, but the six individuals that make up a squad cannot be controlled individually — although you might tell the squad to take cover behind a convenient chest-high wall, one might be squeezed out the edge and not get the cover bonus. Or he might just wander out of cover towards the enemies and voluntarily lose all those bonuses (on the other hand, units in the open do seem to auto-crouch or head for nearby defensive vegetation).

I feel like it would have been better to replace those squads with single individuals, to bring all the extra precision control that would entail, but squad shenanigans are not the only problem. Basic RTS controls like “patrol” and “hold position” are absent, orders cannot be queued, and telling squads to attack with their short- or long-range weapons has so far made no visible difference as far as I can tell. Plus, in a game so much about positioning and tactics, the lack of formation controls also seems like a bit of an oversight. 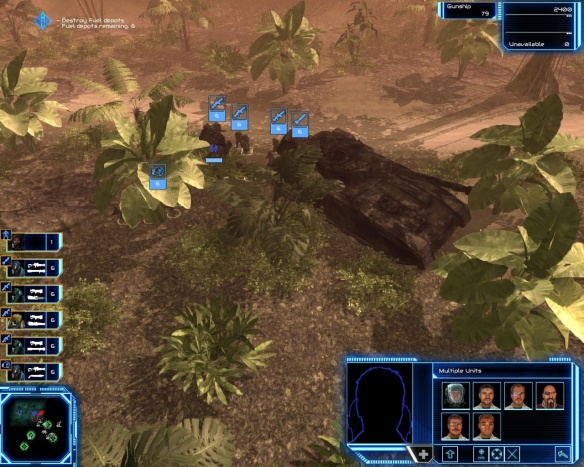 Many decorations seem suspiciously oversized, smelling rather a lot of thoughtless asset store copy-pasta. Seriously, objects in Unity can be scaled.

The campaign meta-game is similarly well-intentioned but ultimately a bit flat. Your starship has various rooms for you to manage your troops and equipment, changing their loadouts and levelling them up and buying new ones and whatnot. It’s very Starcraft II (or Wings of Liberty at least), except there are no characters to chat to while you’re wandering around. There’s all the ambience of a starship, announcements over the tannoy and people working in the background, but nothing particularly engaging in the foreground.

I guess it’s all very mechanical. There are factions to help and hinder by choosing optional missions, and their back-stories imply conflict and rivalry — but this never manifests itself in the game. So you’ve made friends with House Leonis? You can hire some of their special squads. So Santos’ Raiders hate you? … nothing changes. Where are the taunts and threats? Where are the impromptu assassination attempts and unexpected raids? Or the boxes of chocolates in thanks from well-tended allies?

Campaign missions provide e-mail messages on completion but these are similarly faceless. I’m not going to call out the lack of voice acting or cinematics here, but I think some pretence at dialogue with other characters would go a long way to bring it to life — make the briefings and the supposedly desperate resistance fighters a little more immediate. People are named and spoken of and the briefings and messages are written as if they come from somebody, and maybe they’re just trying to play into the asynchronous nature of hyperspace communication, but overall it just feels lacklustre. 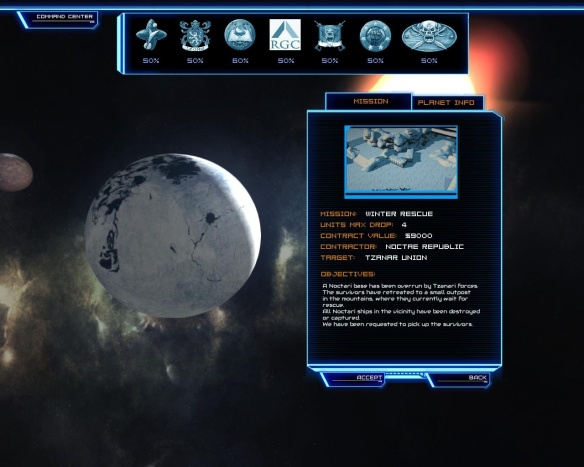 The campaign (so far at least) gives you no option but to cosy up to the Noctari, so I’m not sure why it bothers to list them as a faction. Maybe it’s going to blossom into a choice ‘n’ consequence colour-coded end sequence later on?

I can’t lie, it’s not lived up to the dream. I like so many of the core ideas, but the execution is consistently wonky enough that it sours the mood. It’s fairly buggy, though never game-breakingly so; squads can spontaneously disappear between missions or return from the dead, units shoot their weapons at enemies’ feet, animations aren’t quite synchronised so everyone glides across the floor to a greater or lesser degree…

To be fair, I kind of knew exactly what I was getting into from the name of the game and its price point. That’s awfully judgemental but since it has fulfilled those expectations my instincts are clearly based on reality — though I guess expected a little bit more low-level spit and polish at least. I like the concept and the setting and the structure but it just doesn’t hang together very well.

Ah well, I’m sure my own game will suffer most of these problems too in the end. Hopefully it will at least deliver on its promises, mind you.