I’ve ragged on Sonic Adventure DX so often while discussing other things that you’re probably sick and tired of hearing about it, but it seems like I’ve never actually dedicated the time to examine the game on its own.

I got the urge to replay it recently, and after installing a few hacks to get the XBone controller working I was able to begin. Time to give SADX its chance in the spotlight.

I spoke of the rot beginning with Sonic 3D, that slightly awkward first attempt to bring powerfully engaging 2D mechanics into more dimensions and kind of failing. Sonic Adventure DX: Director’s Cut is the ultimate conclusion to that train of thought, without the artistic flair that made Sonic 3D at least achingly beautiful if not that much fun.

And yet! There is something here.

Having a whale of a time!

The campaign structure of the game, despite all the incredibly awkward dialogue, is actually really rather cool.

You start only able to play as Sonic, and as he meets other characters on his adventure they are unlocked for play too. All six stories occur simultaneously, twisted around and occasionally touching each other. Playing each one answers questions raised in the others about the meta-arc while fulfilling its own self-contained narrative destiny, culminating in the Super Sonic story once you’ve completed all six… sigh, and watched the unskippable credits six times.

Sonic, that’s disgusting. This game is 3+, you can’t say things like that!

Sonic obviously gets the story with the longest running time. Tails’ story is pretty shameless in that he gets all but one stage cloned off Sonic’s story — and each one is cut down to boot. Strangely, cinematics where Sonic led are replaced with Tails having the lion’s share of the dialogue instead; I’d like to think this is a deep and meaningful point about the vagaries of recollection and perception, with both Sonic and Tails each seeing themselves as the hero, but that might be me giving the writers too much credit.

Knuckles, Amy, Big and E-102 are better realised as their stories do not unfold literally side by side with another character, giving you a chance to explore new parts of the same environments. Perhaps it would have been better that Tails didn’t even have his own story, and they put more effort into double-teaming Sonic’s primary path (though I guess they took this in hand with Sonic Heroes). 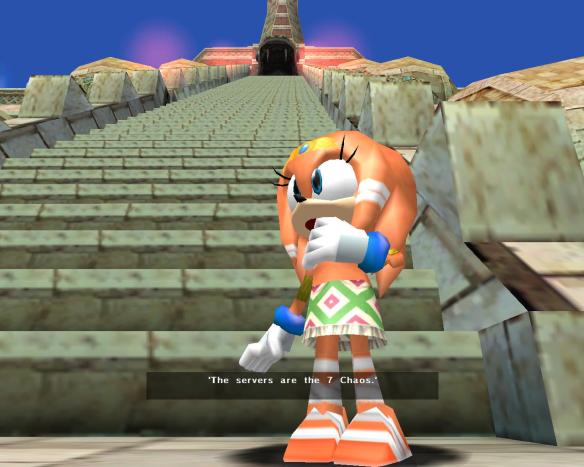 The problem with the six individual stories, and indeed the game as a whole, is that the mechanics shift quite dramatically between and even within each campaign. I do wonder if, as I also speculated about Anachronox, the tendency to slip into minigame territory betrays a lack of confidence in the core gameplay mechanics: although the game ostensibly ships with mouse and keyboard controls it is truly unplayable without a gamepad, and even with a gamepad it is still pretty shoddy.

I mean, it’s basically a third-person over-the-shoulder camera scheme, except when it’s not. Most modern games have the decency to take control away from you during cinematic finishers, while SADX spins and whirls with wild abandon — which is quite fun when you’re just watching Sonic power along an on-rails section but is hideously annoying during awkward jump puzzles. Movement is always relative to the camera so having it swing around while you’re trying to cross a narrow bridge at speed is just not on.

So the game spends a whole heap of time avoiding that core loop of running and platforming. Casinopolis is mostly two pinball tables; Ice Cap contains the obligatory snowboarding section; Sky Chase is a really awkward rail shooter; Twinkle Circuit is a bumper car racing game… And then there is SADX‘s very own Jar Jar Binks — Big the Cat and his infamous fishing gameplay. 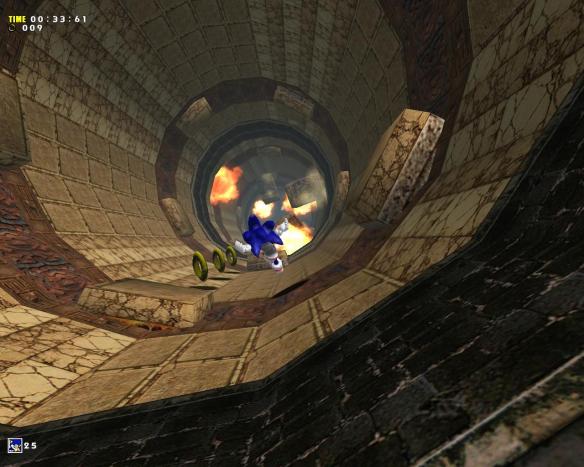 Cylindrical tunnels seem like a great idea until you get upside down and the controls break.

It’s not all bad, though. While Casinopolis’ pinball tables feel scrappy and unfinished, Twinkle Circuit is simple but fun and, best of all, its control scheme is natural and intuitive and not hamstrung by the camera.

When the action stages work, though, they are hilarious. The incredible over-the-top stupidity of it all can’t fail to bring a smile to your face — when it flows like it’s clearly meant to, it’s really delightful. Windy Valley starts with you jumping across mountaintops but quickly throws caution to the wind (ha!) and has you vaulting up the inside of a tornado then racing along twisting mesh tracks floating in the sky because, honestly, why not? Later, Robotnik’s Egg Carrier Sky Deck has you destroying monstrous gun emplacements a hundred times your size, with vast chunks of the level disintegrating as you progress. It is insane.

Then there is the accompanying soundtrack. There are absolutely tonnes of tunes, at least three for each stage and more for the hub worlds and cinematics and character themes in between. There are a few missteps here and there, but it has to be one of the most diverse soundtracks in history — bouncing from cheesy American rock to synth-pop floor-fillers to smooth jazz and every point on the spectrum in between. You can’t put a price on that.

Breaking through your crazy maze like a laser beam my eyes on yooou!

It’s just such a damn shame that it all comes crashing down when you skitter through the wall at a corner or are robbed of your momentum by an errant bit of collision geometry. The most obvious thing about the old 2D Sonics is that they just weren’t broken like that.

And much as I am a huge fan of low poly aesthetics, even I have to concede that Sonic Adventure DX is no looker. Since this is the Director’s Cut, some “high definition” insertions have been made for the player characters — but they stand out like sore thumbs against the grungy edges of the incidental civilians and, indeed, the level geometry.

Spot the one Robotnik instance they forgot to replace with an HD version!

Maybe it’s not that the whole thing is broken, but that a cavalcade of little breakages all add up to sour the experience. The cinematic dialogue is stilted and there are long pauses between lines. There’s frequently no narrative hint given about where to find the next level, with many gate keys spontaneously appearing out of nowhere.

It’s broken and shit but it’s also delightfully overblown and irrepressibly enthusiastic. I love to rag on it but, as with my ragging on silly beards all the way through school before growing one for myself, I actually love it. Love is strange sometimes.

You said it, Knux.