When it comes to Sonic, for me it’s always been all about Sonic 3 & Knuckles. The long, lock-on combo of the 3rd and “4th” games has the best controls, mechanics, levels, and even narrative to date.

Even so, there’s still something to be said for the franchise’s first faltering steps into terminal decline — Sonic 3D: Flickies’ Island. Even as a game that is mediocre in so many ways, there’s something there that sets my heart racing…

Sonic 3D‘s fatal mistake is in its name — it’s 3D. In S3&K and the other side-scrolling Sonic games, running and jumping are the key gameplay mechanics — with a heavy dose of timing and air-control aiming. Aiming and timing your jumps in 2D feels immediately natural, even if it takes a bit of practice to get right, as there’s always a definite and very easily parsed connection between where Sonic is right now, where you’re trying to put him, and his current trajectory.

Aiming and timing those same jumps in isometric 3D is a much bigger ask. Sonic 3D still has momentum, it still requires spindashing into or jumping onto enemies lest your rings get splashed. Understanding Sonic’s momentum, and even getting him to actually travel in the right direction, is surprisingly difficult from the isometric viewpoint with only a keyboard whose keys point 45 degrees away from the ones you generally want. It gets even more comical when trying to jump on enemies that keep moving around. 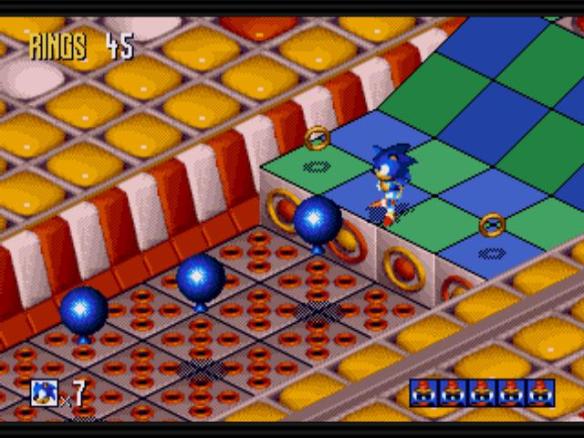 Seriously. The game even knows it’s a problem, as most of these trick-jump gaps can actually be vaulted in one leap with a good run-up.

Indeed, Sonic 3D is a massive departure from traditional Sonic games in more ways even than this. The move to an isometric style seemed to engender more arena-like levels rather than the long one-way tracks of yore. Backtracking isn’t necessarily required, but there are often loops and all five enemies must be defeated before you can progress — and each of their Flickies must be picked up and escorted to the checkpoint.

If you miss an enemy, or worse, the Flicky gets knocked off the chain by a random hazard when you’re wandering around, you can spend rather more time than you’d like trying to find the missing piece of the puzzle. Especially that murderously fiendish red flicky, who jumps up and down randomly around the spot where he was unleashed. Trying to get Sonic underneath the damn thing when it lands, let alone aiming attacks at enemies… 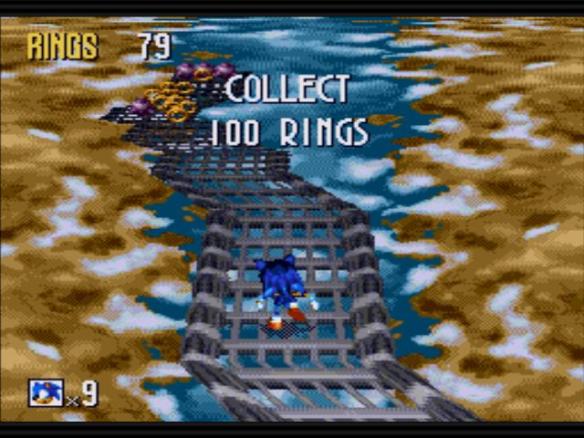 Conversely, the bonus stage is one of the easiest ever to grace a Sonic game. However, you have to give Tails or Knuckles 50 rings to get into it — hanging onto 50 rings in the normal levels being a much tougher objective.

Sonic 3D is a beautiful game. I’ve always been fascinated by the distinction they make between the playable and non-playable areas of the level — playable areas are made up of plain chequered tiles in a connected grid, while unplayable areas are decorated with sumptuous 3D renders of foliage and ruins and all that good stuff. The grid has always been close to my heart, with each tile being the right size for one character to stand comfortably on it, a scale that worked just as well with Warcraft 3‘s pathing grid and I fully intend to bring into my own game.

Sonic 3D also sounds amazing. I’d usually hark back to Sonic 3 & Knuckles for its soundtrack, with such glittering heights as Sky Sanctuary Zone and Ice Cap Zone, but it’s also a long enough game that it has space to wobble, like Carnival Night Zone (though to be fair, it’s more than just the music that wobbles there). 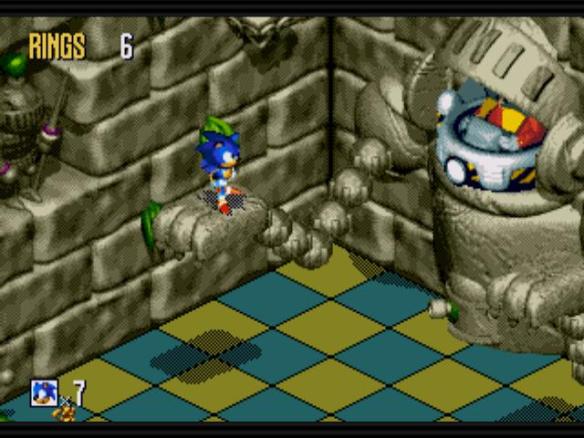 Of course Rusty Ruin Zone has to be my favourite, but they’re all really good… Except Spring Stadium.

The soundtrack of Sonic 3D, on the other hand, is consistently fabulous, with even its own obligatory terrible casino level, Spring Stadium Zone, having a suitably jaunty tune to bounce along to. I truly love both Rusty Ruin Zone acts, both having good beats and jazzy basslines but giving off a slightly mysterious vibe that matches the setting perfectly.

There’s also generally a good constrast between the act tunes to keep things moving, each not necessarily being close mirrors of each other like in S3&K. Volcano Valley Zone has for the first act a fairly sinister action tune, but for the second it breaks out a slow and mournful version instead.

The true master, though, has to be Panic Puppet Zone act 2, which is a superb piece of high-tempo synthpop that gets your pulse going as befits its status as the final act, and it’s a belter of a tune played with sublime instrumentation. People speak of narrative reward in games, but is there also a concept of musical reward, where the best tunes lurk at the climax? The same is definitely true of S3&K, so somebody was at least thinking straight even if it’s never been articulated.

Of course, after all that, it still manages to drop the ball quite badly. The final boss can only be hit by two small targets that must be struck dead on, and all those accuracy woes come flooding back to bite. It doesn’t even have a unique final boss theme, instead opting for the slightly less good of the two different boss themes.

The final final boss, when you have all the Chaos Emeralds, does have a unique theme, but unfortunately it’s not that great and nor is the boss itself. Instead of focusing one one epic encounter, it’s a series of micro-encounters with varying gimmicks, that occurs in an empty void on sparkly tiles. Not quite as bad as the truly awful final boss of Sonic Generations, mind you, but it’s not even fit to clean the boots of Doomsday Zone. 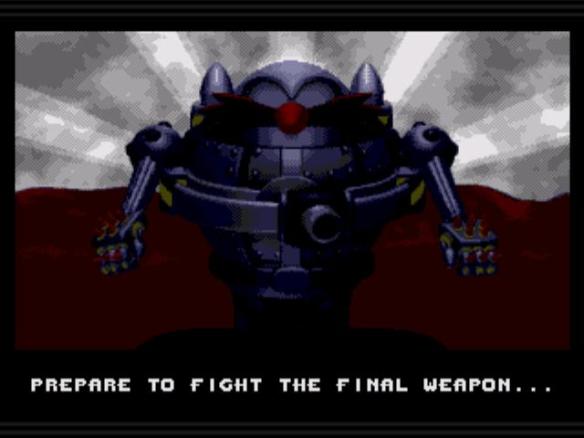 It’s sadly a game you’d probably rather watch and listen to than play for yourself. It’s not difficult because the game mechanics are challenging and interesting, it’s difficult because the control scheme is just a bit shit. A lesson that we have learnt before and will surely learn again, but one that stings just as bad each time.

What I’m saying is that it’s a damn shame, and worse, with the likes of Sonic Adventure coming up afterwards, Sonic 3D also has the dubious honour of being the vanguard of the downfall of a franchise that was only one game earlier at its absolute peak — indeed, not even a franchise peak, but a gaming peak in general.