When I’m feeling a bit sorry for myself, I like to buy some hoary old low-poly action game for a pittance at gog.com. My wishlist is absolutely chocka with… well, things that I find visually appealing and seem like decent games too. Every Friday they announce the weekend’s sale and I look down that list and see if there are any matches, and then think to myself… do I want this?

The answer this time is… yes. Yes, I want this. It’s called Expendable and it’s an “arcade shooter” from 1999.

Old games are always a bit of a double-edged sword. What they have in beautiful graphics and joyous charisma they can often drop in terms of control and, well, actual gameplay mechanics.

Expendable is a top-down shooter, controlled with mouse, keyboard, joystick or some unholy combination of all three as is your want. Use the keys to move and rotate and blow seven shades of fuck out of everything that moves, and, hell, quite a few things that don’t. You want a late-90s fireworks show? This is a good place to start.

If it explodes, we can kill it.

Levels are insane time-trial gauntlets, mostly over in five or ten minutes. Run forward through a variety of industrial, military and natural environments as alien enemies pour in from all sides, occasionally grabbing a keycard to open a door and poking at corners in hopes of finding a secret.

The overall storyline is minimal, but the levels are frequently punctuated with little cinematics — usually involving something crashing or exploding to open up the path to the next part of the level. Even below that layer, there is a plethora of environmental details, like collapsing pillars that crush enemies or block laser fences, or just enemies jumping in from the unpathable areas to the side.

It’s a different angle on the spectacular events of modern shooters like Bulletstorm or Wolfenstein: the New Order. While these super-budget monsters linger on their set-pieces, making damn sure you see every last rigidbody physics chunk bounce and roll, Expendable throws everything down as quickly as it can because it’s always got another explosive set-piece just around the corner. It might even be the same set-piece from another angle, but really, who cares?

This is basically the finale of Crysis, except it leads to a more interesting boss fight.

Weapons beyond the basic gun are dropped by enemies and crates along the way, each with a reasonably tight ammunition counter but able to be upgraded by collecting more of it. Weapons are liberally scattered and usually come in multiples anyway, so it doesn’t take much to get the laser-machine-gun spewing a cone of vicious yellow bolts at pretty much everything you can see on screen.

The enemies unfortunately get a better array of weapons than you, spraying bullets and rockets and lasers or all three. Alien footsoldiers are supported by mechs, fliers and turrets all with their own unique patterns of projectile vomiting. Make sure your projectiles hit them and theirs don’t hit you — how hard can it be?

Something in your way? Shoot it!

Well. The other edge of that sword is unfortunately the control scheme — in the blaze of projectiles and disintegrating terrain it’s very very difficult to aim.

Movement is relative to the character and not the camera, which means it’s hard to tell what direction you’re actually facing in the chaos, let alone which direction you want to be facing. Strafing left and right is mandatory to avoid instant death, but strafing at one moment is completely different to strafing the next as you spin around.

One boss fight pulls the camera so far out that you can’t even see where you are, let alone which way you’re facing. Difficulty therefore tends to fluctuate around favourable camera angles rather than the madness of the combat encounters.

Explosions and lasers AND lightning. Boss fights are delighfully varied.

The funny thing is that it turns into a passable third-person shooter every so often, tethering the camera to your little soldier. Since it’s clearly not really designed for this it comes across like so many dodgy FPS implementations that have been modded into Warcraft III over the years, but with the mouse controlling rotation and strafing finally making sense the game becomes markedly easier at those few, blissful moments.

Well, maybe that’s not quite fair. Little Big Adventure 2 has a similar control scheme that functions relative to the way Twinsen is facing, but LBA2 has a much slower pace and there a much less noisy world — so you never lose sight of yourself and there’s much more time to turn to face your targets. This control scheme can work, it just doesn’t in the very frenetic environment of Expendable.

Third-person shooter? More of this, please!

Ahhhh, what could have been. If not for those controls, I’d have wholeheartedly recommended Expendable. Guns, explosions, hordes of enemies, colourful worlds, brilliantly crafted cinematics and environmental details, quickfire levels that keep your pulse racing… It’s everything you could ever want, if only you could aim.

People obsess over “HD” remakes with all the graphical bells and whistles, but this game needs somebody to simply come back with a half-decent control scheme. Maybe it would work with a joystick, but on mouse and keyboard it really doesn’t.

Which is a damn shame — because in another life, I would have sold my soul for a level editor and made a home here. 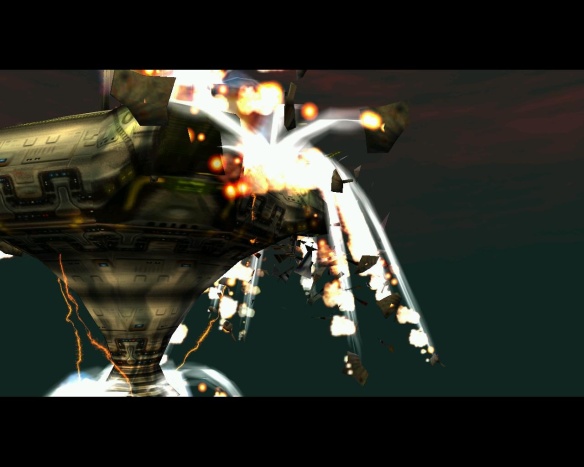 This spaceship represents all my hopes and dreams. The explosions are them being shattered.