Saints Row IV is a Mass Effect parody that wants to be a Sonic game. Pretensions to being an open-world crime simulator are finally revealed to be just that — pretensions. There are many games packed in here and very few of them care to make much use of the game’s supposedly core mechanics.

Luckily, all of those different games are pretty well done and the parody is hilarious. Does that make it right? Let’s talk about it.

You know how, once you complete the Legend of Zelda, you can go back and redo the entire thing in a harder mode, with some stuff moved about a bit? That’s kind of what Saints Row IV is to Saints Row III. Basically the same thing, but tougher.

The central conceit is that you’re in a simulated world instead of the real one, so instead of throwing grenades you get to have a selection of super-powers. (Funnily enough, I haven’t seen any simulation-in-your-simulation jokes yet, but one character does have the savviness to call you “playa”.) 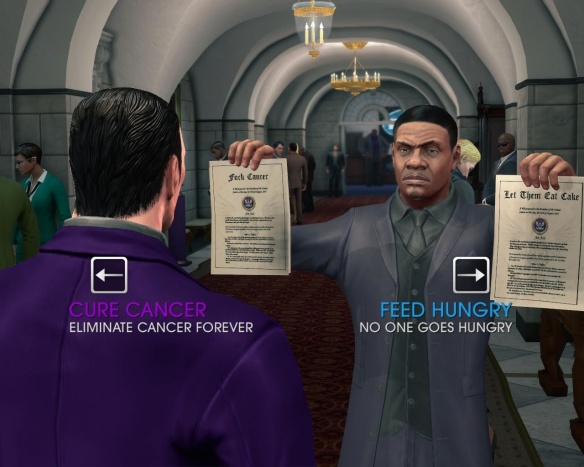 Keith David plays himself, as your Vice President. The game pretty much starts at maximum ridiculous.

The first powers you get are interesting in that they completely nullify the open-world crime simulator aspects of the game — super-speed and super-jump mean there is literally no reason to drive, except when the game gives you a you-wouldn’t-download-a-car-would-you? mission. Why bother avoiding traffic when you can run so fast cars bounce off you and you can just vault over those troublesome skyscrapers that get in the way?

On the other hand, the powers unlock so many of those vertical spaces you previously couldn’t get close to without crashing your helicopter. Ledges and terraces that were incidental scenery before are now accessible vantage points and stepping stones to the sky, from whence you can glide down to your actual destination.

It’s fair to say that those powers alone, before you even get into the upgradeable nukes, pretty much break the game… 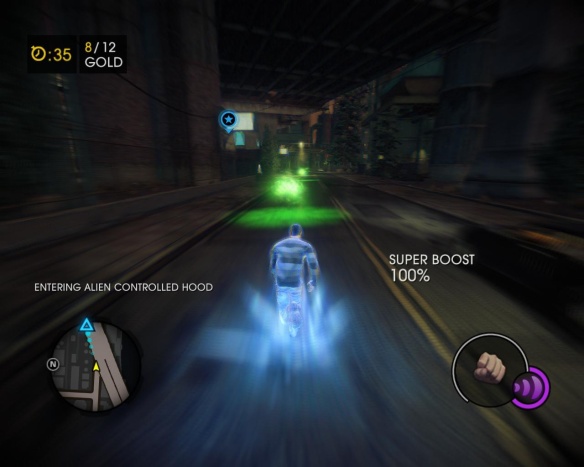 This is why post-processing was invented.

Don’t be fooled by a few palette-swapped adverts — it’s the same city we saw before.

… until the enemies start to have those powers too. It’s not that bosses are just giant sacks of hit-points, but when they start leaping around as crazily as you can there’s a delightful mix of chasing and aiming and timing to make sure you actually land a hit. There’s still a whole heap of shooting, of course, but I’ve frequently found boss fights stretching on (in a good way) and occupying a lot more space than I remember in… Well, any other game.

The powers also open up a larger variety of side missions to prop up the now very staid-looking challenges rolled over from SR3, and this is where it starts to become a Sonic game.

Super-speed, naturally enough, sets you up for some time-trial races. The fun thing here is that, with full-blown mouse-look engaged, you can make hideously tight turns without slowing down. Maybe it doesn’t work so well with a console controller’s analogue sticks, but on PC it’s a total riot. Since you are invincible while sprinting, it’s a challenge of pure skill with the controls, making sure you catch all the boosts, charge up your jump for the right moments, and don’t smack into a wall.

Super-jump then incites the game to big chunks of platforming. Although the open-world city is mostly identical to the one from SR3, some alien structures have been injected, including six towers surrounded by floating platforms that need to be climbed by a combination of jumping and sprinting up walls. Other side missions combine the two, giving you time limits to run and jump between platforms. A far cry from the awkward hold-down-forward-and-trust-the-computer controls of Sonic Adventure, at any rate, and there’s enough slack in the air control to make it harder than it sounds.

This is pretty much the Chaos Emerald bonus stage from Sonic 2, thankfully without the full 360-degree tunnel nonsense. 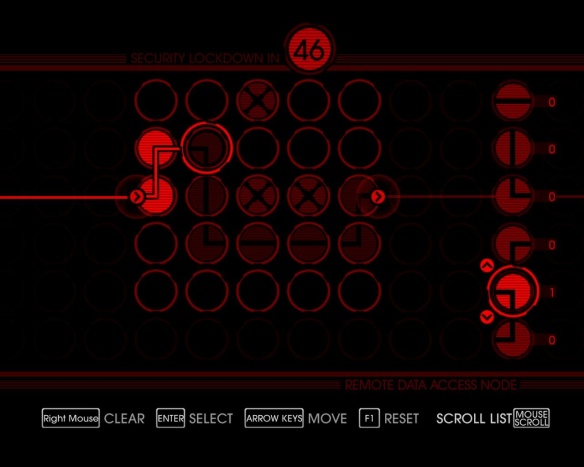 Of course the actual game plays second fiddle to the comedy.

That’s a double-edged sword, though — I feel that Saints Row IV is quite a bit less accessible than its predecessor. If you haven’t played Mass Effect, for example, then great big chunks of banter are going to go right over your head — when you’re not in the simulation, you’re on a space ship with crew members hanging around ready for a chat, including the ability to Press X to Romance each character. Is Mass Effect big enough that you can say it’s a safe bet for parody? Maybe.

I’m not sure if it’s just my memory playing tricks on me, but SR3‘s parody felt more all-encompassing. It was clearly poking fun at games, at movies, but it seemed to be making fun of broader tropes that are more timeless — while SR4 has a few very particular targets in mind, that it mercilessly savages. Sure, when you are well versed in those targets, the parody is hilarious…

… but I’ve never played Saints Row 1 or 2, and there are plenty of references to those which I expect I would laugh at if I understood. Judging by the banter, SR1 had a silent protagonist and most people used a default male player model? On the other hand, I’d never complain that you should have played Baldur’s Gate to appreciate Baldur’s Gate II. Maybe it just stands out here because Saints Row 3 was so very… forgiving. (You definitely have to have played SR3 before SR4, at any rate.) 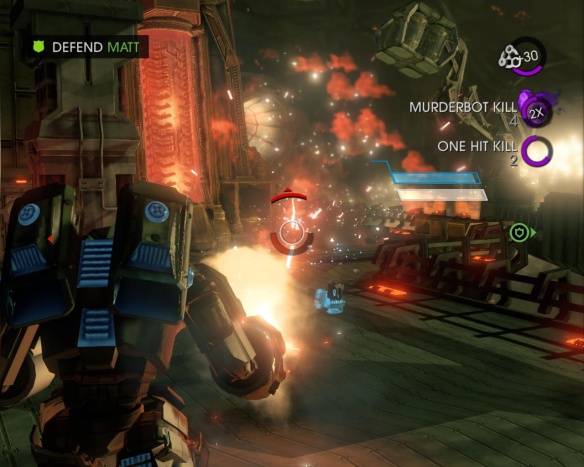 Some missions take place outside the simulation, so they compensate for the lack of super-powers with a giant robot.

The other problem with some of the parody is that the game does sometimes stray towards just becoming the thing that it is lampooning. The robot CID is laughably direct about how him giving you side missions will allow you to 100% the game, but it still does give you a whole heap of them (as does every character). On top of that, there are even more collectibles scattered around the world than before — indeed, enhancing your super-powers requires that you grind a particular kind of collectible.

Saints Row 3 was fun to pootle about in but it was always at its best when doing a ridiculous set-piece. Storming through the finale to Bonnie Tyler’s I Need a Hero on loop was a sequence of sheer perfection, and there are far more delights awaiting here for when you shrug off the increasingly irrelevant open world and choose to advance the plot. This is why I say there are several games in here bursting to get out — I almost think I’d rather the devs concentrated on a tighter ten hours of linear but non-stop hilarity than twenty with a spread of fairly innocuous activities padding it out.

I’m only a completist because you make me feel bad for leaving any box unticked. It’s a deep-rooted guilt complex.

Well, for all I can feel a bit squeamish about some of its mechanics and attitude to parody, I’ve still had a great time and laughed out loud quite enough. It’s completely daft and that’s kind of what we’re here for, though your mileage may vary enough depending on what parts of the parody you “get” that I can’t recommend it wholeheartedly.

Of course, in the spirit of cosmic balance, I have written this review with reference to Sonic games — which you, dear reader, may well not have played. I think I’m about to disappear in a puff of logic.