A few years ago now, I needed a computer for commuting work. A companion for the monolithic base-station, something that sacrificed power for portability. I bought a cute netbook and named it Astradyne.

Technology has moved on since then, though. Astradyne still works but is not quite quick enough for my increasingly impatient brain. Astradyne is light but surely not as light as an equivalent machine from this age of pocket rockets.

So I started looking around…

Funnily enough, the netbook slice of the market seems not to have moved on very much at all in the last four years. A 10.1″ netbook might now have a detachable touch screen to make it turn into a tablet, but it’s still a hefty 1.1-1.2kg in total weight. It’ll be missing an ethernet port but it’ll still be a bit chunky around the bottom. It might have 4 cores instead of 2 but they’ll still be individually clocked in the 1.3-1.5GHz range.

On the other side of the market, 10.1″ tablets seem to mostly be Android and Chromebookery and other madness rather than full Windows. Astradyne’s primary function was to run LoneWiki, a power-user’s home-baked .Net 4.0 desktop application, and that will not change with its replacement — so that threw those options right out of the window. Basically, it’s not (just) for browsing the internet on the toilet, an activity that is OS-agnostic.

I had been keeping my eyes open open for a while, but never quite saw something that fitted all my strange and blasphemous criteria… Until now. 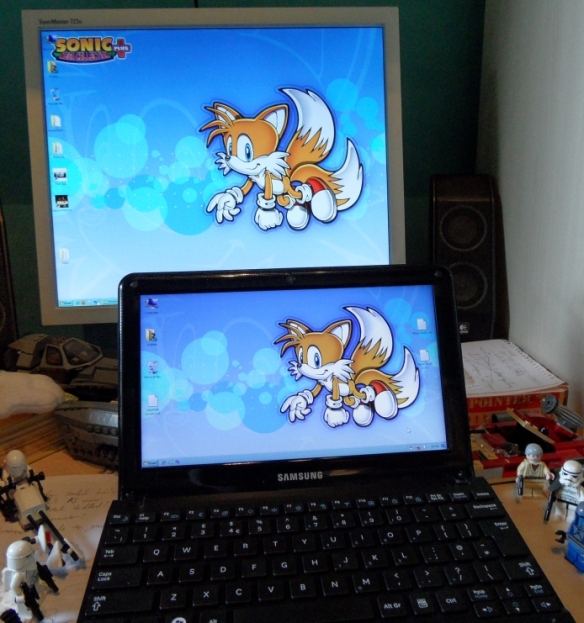 ARCHIVE FOOTAGE OH YEAH I DON’T EVEN LIVE THERE ANYMORE

I bought an HP Pavilion x2 10 Convertible. It is half tablet and half laptop, but its combined weight is a svelte 920g and it’s half the thickness of poor old Astradyne. In the tradition of naming all my supporting devices after 80s synth instrumental songs, it has been dubbed Airlane.

The keyboard half is pretty nice, attaching itself to the screen with a flappy stand and magnets. Lots of magnets. The flappy stand is the part that scares me most, being made of some kind of fabric with metal inserts to give it rigidity — I can see this bit disintegrating in the future, leaving the more durable metal and plastic parts bereft. On the other hand, I don’t exactly give my devices much punishment, and preliminary tests show the stand remains perfectly functional even when balanced on an uneven surface (i.e. my knobbly knees). It’ll probably be fine up until I decide this one is too crap and heavy and replace it.

I don’t have a lot of basis for comparison about the touchscreen half because I really don’t like touchscreens. Call me old-fashioned, but there’s something about mashing your fingers into a hard, unyielding surface that just doesn’t feel right. Nor does swiping, which will always leave unsightly smears across the glass. Glass is inherently the wrong surface for this, which stands in stark contrast to the keyboard half’s touchpad — whose surface feels perfect for swiping. Why are touchscreens not made of this material yet?

In the mean time, I have bought myselft a stylus. It’s more precise than my smallest finger but it’s still not precise enough for Windows desktop. The problem is that all the fine-tipped styli are hideously expensive (we’re talking upwards of £40) and seem to only be compatible with Macs rather than everything as these stubby 6mm styli are. Bah.

You might notice a some commonality among desktop backgrounds and Windows colours.

The only caveat is that it comes with “Windows 8.1 with Bing”. Before now, I had never actually used Windows 8 in anger. “How bad can it be?” I asked myself. Quite bad, apparently.

The thing that really gets me about Windows 8 is the competiton between the desktop world and the app world. There are basically two independent OSes running simultaneously, and they find it really difficult to talk to each other and generally get all in a fankle. For all the positive refinements to desktop mode, like the improved task manager, you’ve got horrendous regressions like a wall of shite that doesn’t even show all your installed programs instead of a start menu.

On the other hand, though, it did come with basically no bloatware. A couple of HP-specific things that were easily uninstalled via the classic control panel, and a load of “apps” that were even more quickly disappeared from the… app settings control panel. Somewhere different, of course, because “apps” aren’t “desktop apps” and… yeah.

The winning factor, though? It came pre-installed with 7zip. I don’t have the faintest idea why, but I use 7zip all the time so… Thanks HP!

Hopefully when Windows 10 offers free upgrades for the entire universe it’ll fix all of these issues. It certainly can’t be any worse, though I’ll make sure I test it out thoroughly on here before even thinking about upgrading Helios from Windows 7 — because I’m not convinced that it being free or having other minor improvements is worth all the Store/app pain this generation of Windowses are bogged down with.

Touchscreens still have a lot of hurdles to overcome before I embrace them, but magnetic attachments to well-built companion keyboards will do for the time being. Who knows — maybe now that I have a half-tablet I’ll find some way to use it that I never anticipated before, and my life will become so much richer!

In the mean time, I’m coining the term “laptoblet”. You heard it here first, kids.