I’ve maintained for a while now that I don’t actually like strategy games. I’m rubbish at them, I’m terrible at thinking beyond the short-term. My undying love belongs to the relentless, reflexive action of the shooter and the obsessive-compulsive inventory tetris of the RPG and the romance sub-plots shoehorned into both.

But I played Supreme Commander: Forged Alliance recently and… I enjoyed it. I was not good at it, but I muddled through on Normal difficulty. I like building bases. I like telling the units to mine resources and then build structures and build units. I don’t know why.

Here then, is another foray into the annals of RTS games that once piqued my interest. Can I find some answers in Earth 2150: Lost Souls?

It’s weird to go back to something you haven’t touched for so long. There are so many little things that jump out, that make you think, “so that‘s where I got that idea from!” I haven’t played Lost Souls for at least 6 years…

… but I can already see that this is why I found Supreme Commander a bit lacklustre before its expandalone came on the scene to redeem it with super-shiny aliens.

Exhibit one: every unit has headlamps and there is a day/night cycle.

There’s a lot of depth in Lost Souls that might off-putting to some, but in contrast with SupCom where the only real actions are to build and issue attack orders, I think a little bit of extra icing on the cake does just nicely.

The most obvious thing is that you get to design your own units in Lost Souls. In SupCom I always got annoyed at particular units that could only attack ground or only attack air — in Lost Souls, you are free to design versatile units with equipment that can go either way as I see fit. It immediately makes your army more personal, less faceless — more, well, your army.

Naming things is the hardest problem in software engineering.

See, if you boil it down, all three (four) factions in Supreme Commander are exactly the same. Sure, the distribution of hit points, shields and anti-air weaponry varies, but every civilisation is a haphazard collection of tanks, walkers, ships, fliers, quantum this and quantum that with little unifying theme beyond their visual appearance.

Lost Souls goes much further: although there are common technologies such as rocket launchers and chainguns, beyond that it gets messy as befits each faction.

The Eurasian Dynasty are grungy old industrial types with heavy tanks but crap shields, with their forays into sci-fi going little further than gritty laser beams. The United Civilised States, my favourite of course, get all the walking robots and more traditional high-tech like plasma guns. The Lunar Corporation are all lightweight hover-tanks so they don’t need boats like the others, and they get spattered with high-concept sci-fi weapons like lightning guns and sonic wave generators.

These technologies are not just palette-swaps either. The lightning gun of the LC can stun unshielded units, while the ED’s laser heats them up to self-destruct in a split second, bypassing hit points entirely. While SupCom has a different gun on every unit, the mechanical differences are so minute as to render them mostly meaningless.

SupCom‘s faction variation is almost entirely superficial. They all build mass extractors, they all have tech 1, 2 and 3 power stations, ho hum. In Lost Souls, even the power generation and mineral extraction mechanics vary per faction. 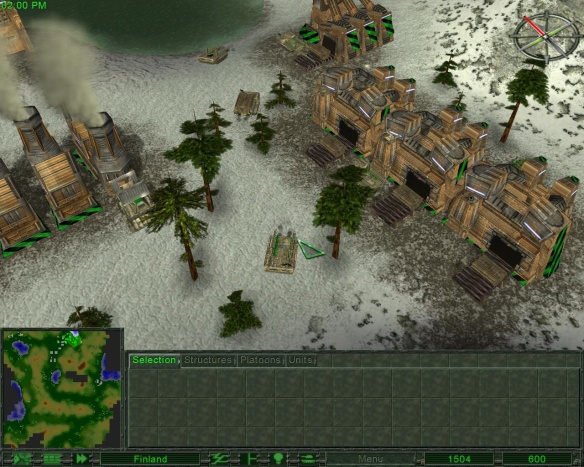 The ED have to order carriers to take containers from mines to refineries… It’s a beautiful little clockwork model when it works, but over-optimise your base and the traffic jams will end you.

The Lunar Corporation don’t need construction units, they just airlift buildings in… So they can be recklessly expansionistic.

Okay, maybe Lost Souls adds a little too much icing onto the cake.

In perhaps the biggest break from tradition, units require ammunition. This means setting up supply buildings and unarmed supply vehicles. A unit that runs out of bullets will call for resupply, but the suppliers will happily fly right over that heavily-fortified base you’re trying to flank — or you’ll realise you’ve already lost your suppliers and your units will just sit there getting slaughtered.

The campaign is also a mess. I love the narrative, about the last people left desperately scrabbling to escape the doomed Earth. I love the persistent base, which allows you to ferry units and money between missions. I love how the huge tech tree and long research times really fit in the campaign mode (though too many techs are given on completing missions rather than as you gather enough money to buy them).

The problems arise when every mission puts you up against endless hordes of enemies or is a hideous slog against an impossibly fortified base. More towers than there is money in the world to buy units to take them down, but every last unit must always be destroyed to win — or else the enemy units spawn endlessly regardless of actual production and money. It’s frustrating to turtle up against the waves only to run out of resources when you’ve barely managed to start your offensive.

You might be able to kill the power station to disable the nearby towers, but you still have to demonlish every single one of them to win.

No, Lost Souls comes into its own in the skirmish mode, where the AIs are beatable and bound by the same laws as you. You can double or quadruple the speed of research to get the big guns rolling sooner, and ensure you pick a map with a whole lot of money or even make cash come in periodically — all of which lets you take your time and play the way you really want to.

Which is clearly building bridges, walls, tunnels and marching relentlessly towards all the really cool high-level vehicles. Which is exploring sumptuous low-poly forests and ruined cityscapes. Which is just sitting watching your factories because their doors open and the units drive out.

BRB, parking a huge army underneath your base. Buildings automatically create basements, but you are free to dig where you please.

In many ways Lost Souls is brilliant. There is so much detail, and so much opportunity for personalisation. I love the concept, I love the setting, I love the building and unit designs. I love the customisation and all the things you can do.

In many ways it is also from the dark ages. You can’t shift-click to queue orders, you have to use an awkward macro-recording window in the corner. Unit hit-boxes are often flaky, with mis-clicks leading to frustration as your troops try to move on top of an enemy instead of shooting it. The campaign is unplayable.

You can get Earth 2160 on GoG.com these days — I wonder if they managed to tidy up all those loose ends?

The laser beams and lightning arcs are flawless.