All right, we’ve finished bawling our eyes out about the plot, now how about we get down to the mechanics of Human Revolution? It is, after all, a computer game. Can we find it in ourselves to disentangle the lore from the gameplay?

The major mechanical beef I have with HR is that it’s not quite sure whether it’s a first-person shooter/sneaker or a third-person cover-shooter.

No going back now.

Okay, let’s take a step back and try to do this objectively.

In first-person mode, it’s still not that great a shooter. The crosshairs are the usual too-wide affair, and it is obsessed with just switching them off entirely (that makes the game harder, yes, but for all the wrong reasons). Getting the laser targeting mod should make life easier but, again, it removes the crosshair and the substitute is somehow worse. Now that’s not to say I haven’t been popping headshots with the 10mm pistol at range regardless, it just doesn’t feel quite right.

The guns feel a bit crap, that’s it. The 10mm pistol, which in the real DX made a head-splitting retort when fired, makes a weak pop even before you get the silencer. It’s a bit like UT2004 versus UT99 — the sound effects lack oomph and it makes the weapons feel kind of useless, even when you’re sweeping the beam of a monstrous laser rifle across the room. It’s all a matter of perception.

Oh yes, and that plasma rifle that’s only just a prototype 20 years later? Everyone’s got one of those. I know, I know, it’s the one weapon that does sound fairly weighty.

Perhaps the most interesting thing about combat here is that ammunition (that isn’t loaded into a gun) takes up inventory space. It’s certainly a far cry from the invisible ammo of the original and the universal ammo of Invisible War. I would complain about it because it means I can’t carry as much loot, but it makes an awful lot of sense. I mean, it’s not like it’s a new thing; in Baldur’s Gate ammo took up inventory space too.

Maybe there is one other interesting choice, in that tranquiliser darts and the stun gun make people instantaneously drop unconscious. It sort of loses a bit of the tension from a pacifist playthrough, as you used to have to worry if that poor NSF man might reach the alarm panel before he keeled over.

Okay, the counterpoint is that soldiers can now revive unconscious comrades if you leave them to it. The counterpoint to that is… well, lure them out and tranq them one after another, leaving a great big pile-up of bodies. Ah, the eternal struggle of the completist — I am compelled to deal with every single moving part, whether I need to or not.

Aye, it’ll be a right tragedy when I cinematic takedown your face.

Uh, actually it’s nothing at all like old times. For a start, you have a lot more triangles making up your… er… assets.

Of course it all turns on its head when you get behind cover — nobody needs particularly tight mouselook to down people from a stationary hidey-hole.

The cover controls are pretty mangled in other ways, though. When you’ve come out of the tight refinement of Mass Effect 3, where all your cover actions are accomplished with a single button and it’s finally learned to (mostly) not do the wrong thing at the wrong time, coming in to Human Revolution where you have to hit one button to go into cover, another to poke your head over and one more to zoom in… Eurgh.

(To be fair, it did take Mass Effect three games to get it all smoothed out.) 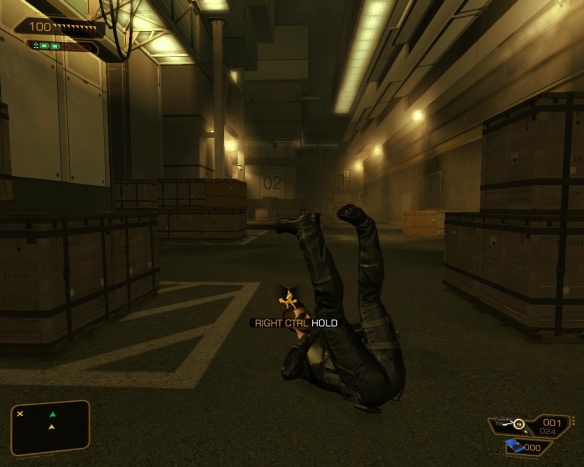 I’m also not sure about what the third-person cover mechanics do to stealth, in the sense that… Well, they make it too easy.

When you’re stuck to cover, you can see over and around it without actually exposing yourself. You can just take your time, wait for the guard to turn around, and keep on sneaking. Even on the “Give Me Deus Ex” difficulty level (that labelling alone being problematic, considering the original cast no aspersions about any one difficulty level being “better” than the others), you can stick your head over the parapet, stun a guy in full view of his friends, and duck back around before anyone notices.

Of course “AI” in a stealth game is a strange proposition. Yes, you need enemies to be clever enough to react in a compelling way, but stupid or predictable enough that a player can work out how to successfully game them and isn’t completely floored by a single stray glance.

I can seeee yooooou!

They also fail to notice the giant sniper rifle barrel hovering at the doorway. “It’s probably nothing.”

Maybe it’s the constant flip-flopping between the two that hurts most. The change of perspective when you snap in and out of cover is pretty annoying, especially if you’re trying to line up a gunshot and then run away.

Maybe if there was a better seperation of first- and third-person elements, if it dropped all the cover mechanics and stayed first-person except for conversations like the original.

Or, along with severing all connection to the real DX, maybe Human Revolution should have gone the whole hog and been fully third-person. The more cinematic elements would fit together much better then, and the actual shooting is average enough that it could easily withstand the transition.

The Icarus Landing System is completely ridiculous and overblown, but by Jove I still find it compelling in its own daft way. 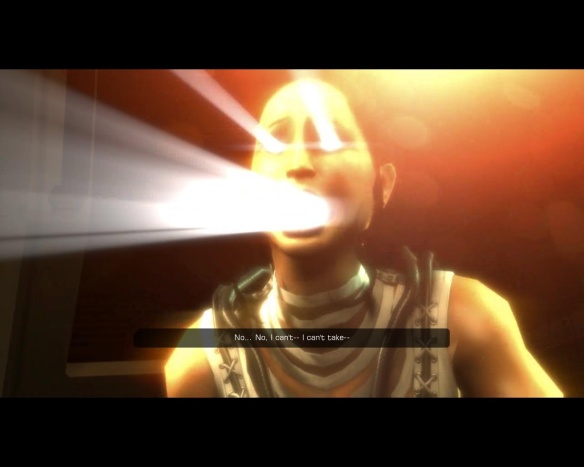 And then, well, you get to Panchetta and the whole thing falls apart.

It’s that post-credits sequence that really hammers the final nail in this game’s coffin. Human Revolution, a game so stylised it contains little recognisable beyond its golden haze and cinematic takedowns, invokes the original Deus Ex‘s theme tune. Only then do you realise the true gulf between the games. Those thunderous beats, that instantly recognisable motif that send shivers down your spine — that motif this prequel refused to acknowledge beyond the occasional whistling civilian.

That’s why Human Revolution is too different to work. It didn’t use the font, the logo or the melodies. Its music blended into the background and the colour scheme was so achingly homogenous that China and Detroit are basically indistinguishable. Deus Ex was dirty and cluttered and vibrant and contrasting and every level looked different, while Human Revolution is so manicured everything gently sinks beneath the waves of a sea of uniformity.

It really isn’t a bad game, though. There is a good blend of action, stealth, reactivity to choices and non-critical failures; it is not perfect but, and I hate myself for saying this, the refinement of a sequel or two would surely bring the mechanics up to scratch. As long as they start by turning off that gold filter…