Yep, I splurged on all the story DLC for Mass Effect 3. No horse armour, just companions and mission packs here. Having said that, all four cost me a total just shy of what I paid for the whole game on release day… And all these packs are from 2012.

My self-restraint sucks too. Herein lies a report on the first two packs, From Ashes and Omega.

The obligatory companion pack is the one you want to unlock first, because obviously he has integrated dialogue throughout the entire plot — the more missions you take him out on, the more value for money you get.

The introduction mission sees a return to Eden Prime where deeper digging has unearthed this one active pod. A few flashback sequences give some direct insight into the Prothean’s final moments as his base is overrun with Collectors (I guess the Reapers modified the Protheans into Collectors before they’d even finished wiping them out? Vigil never mentioned that bit). The Protheans are seen using a bad-ass laser gun, and this pack did the right thing by giving me access to it.

It’s a fun weapon because giant aquamarine beams are always fun for all the family, but the truly remarkable thing is its old-school heat-sink — it doesn’t use ammunition, it cools down on its own, just like the first game’s weapons. In practice, the ammo counter decreases and then goes up on its own when you’re not shooting.

Seems like a bit of a missed opportunity in the main game, actually, so it’s fair play — I still think that proper ammo-driven shooting is best (questionably universal ammunition aside), but variety is even better. It can be a little temperamental about regenerating if you actually zero the ammo, though; any action other than sitting still knocks the process and it refuses to do anything until you hit reload again.

Not only did the pod’s power last 50,000 years, it also survived the fortress burning down around it.

The great thing about Javik is that he’s a complete and utter arsehole. (Note: this last surviving Prothean managed to keep his stasis pod switched on for 50,000 years while all the preparation in the world couldn’t keep Ilos alive for a few centuries. Plot-hole-tastic!)

The Prothean is a fun bait-and-switch because he’s completely unlike what you’ve been led to believe. The noble researchers on Ilos who sacrificed themselves to save the species and the benevolent observers that watched young humans rise up haven’t got a look in here — Javik is a hardcore imperialist that brooks no failure or weakness. He remembers when the current galactic species were grubbing around in the dirty, and his pithy knock-downs are delightful in their unnecessary venom.

As a combat aide, he’s fair enough. Assault rifles and pistols, some biotic powers (excluding the bad-ass shockwaves he deploys in the flashbacks, grumble); nothing groundbreaking barring his grim, world-weary attitude. Since he’s a character pack, though, it’s dialogue we’re in for — if the cynical put-downs don’t work for you, maybe the extra insights into galactic history, a perspective from the previous cycle, might also sweeten the deal.

It’s important to note that Omega contains a single female Turian. That’s about the only reason to get it.

Well, not the only reason, but it is pretty much more of the same as the main game — luckily, I quite enjoy the main game (plot aside), so I’m fairly cool with this if not particularly enthused. Aria T’voiced-by-that-woman-from-The MatrixLoak is only ever found lounging in a club in the Citadel until you buy this DLC pack to kick her into action. After a certain point in the game, she intercepts you as you land on the Citadel and gives you the scoop.

And I applaud you, only female Turian in the entire galaxy. (Garrus’ sparring partner was clearly a figment of his imagination.)

When you arrive Cerberus are already entrenched so it’s a lot of running and gunning around the edges to galvanise resistance and kick some butt. While it begins with fairly familiar environments from Mass Effect 2, your infiltration eventually takes you into the station’s mushroom head mining and reactor complex.

The environments there are properly expansive and brooding as befits something that clealy wishes it was Star Wars, though the lighting is perhaps a little bit too low to be comfortable. Bad-ass tech-armoured melee-obsessed robots join the Cerberus forces, along with a new kind of husk that has a Lovecraftian tentacle face.

Gosh, I’d never have known that was the central reactor if you hadn’t pointed it out to me.

The reward for slogging it out is a nice new assault rifle called the Chakrum Thrower. Another new twist on firing modes, you can charge up the power on an explosive disc that sticks to things — unfortunately, it did not turn out to be Unreal Tournament‘s Ripper, but it’s quite cool. Maybe it was meant to be the Ripper but they failed to implement ricocheting projectiles and just turned it into a plain old sticky explosive. 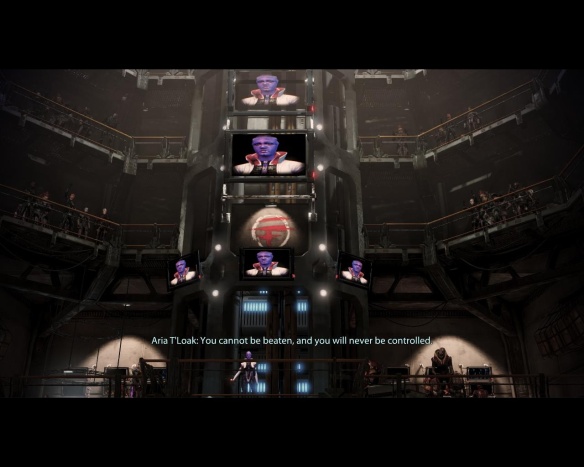 Omega, a lawless hellhole, still has a massive network of television screens with a single point of control.

From Ashes is definitely worth the money. Javik’s alternative take on history and his bitterness make a sharp counterpoint to the hopeful optimism of all the modern cast. Endless banter all round, and plenty of laugh-out-loud moments in amongst the grim.

Omega is chunky but pretty generic. It has nothing to offer in terms of the overarching narrative, so it’s definitely the most disposable pack here. The new missions and enemies are pleasant enough, and the new assault rifle is pretty cool, but there’s not much here to really drag you in unless you’re a big fan of Aria. Needless to say, I am not.