GoG.com is a wonderful thing. All these late-90s FPSes, that I was too young and lacking in computing power to appreciate at the time, are suddenly available for extremely reasonable prices.

While I was just meandering around a while ago, I stumbled across Shogo – Mobile Armor Division and figured it’d be worth a punt some time in the future. I added it to my wishlist against the day I could be bothered.

Last weekend, it came on sale. As is always the way, I took the plunge.

This is a classic FPS, fair and square. Mouselook has equal billing with full-keyboard, complete with neatly adjustable smoothing and sensitivity. (With zero smoothing it was really juddery, so a tiny bit seems necessary but not detrimental.) Maybe the crosshair is a bit small at 1280×1024, but apart from that, a clean bill of health.

Shogo is split into levels of two modes; on foot and in a mech. Although they’re both still FPSes, they play quite differently.

I wanted orange… it gave me lemon-lime. Vending machines do not dispense health.

The on-foot levels tend to be more like Quake II — fairly tight corridors, winding around twisting industrial facilities and city streets to create fairly non-linear environments to explore. Luckily it isn’t all brown – the environments are all perfectly colourful. Not specifically rainbows-everywhere or slathered in bloom, mind you, but simply fairly normal real-enough places where, y’know, everything isn’t brown.

Health and armour power-ups are fairly scarce in the on-foot sections, but there is another way to recover hit points: by scoring critical hits. The critical hit registration is a bit hit or miss, but the intent is unmistakable: don’t stop shooting. Ever.

This attitude is further bolstered by the fact that ammunition really isn’t scarce, and most of the weapons are very rapid-firing. While the AI can kill you very quickly, they react slowly enough that you can start laying into them before it’s too late — and if they’re spasming in pain from a constant hail of bullets, they don’t shoot back. They’re also really stupid, so shooting and then ducking back around a wall is enough to make them forget you, thus balancing out their death-dealing nicely.

On the other hand, the levels are small and fast, and the load times so snappy, so if you forget to quick-save then restarting a section is no big trial (barring perhaps the unskippable cinematics). The movement speed is so fast it even starts to feel like Unreal Tournament (take a shot), with the hordes of enemies leading you on taking the place of respawning bots, dying as quickly, and often explosively, as other characters in a tight deathmatch.

Worth noting, however is the fact that guns do need reloaded. There just… isn’t a reload button. Running out of bullets in the middle of a firefight against one man is fine, because he’s still spasming in pain while you cock your gun, but against more than one it’s pretty much game over. Luckily with ammunition so plentiful (at least on Normal), you can just empty your phantom clip into a wall… Or reload a saved game instead of the gun. 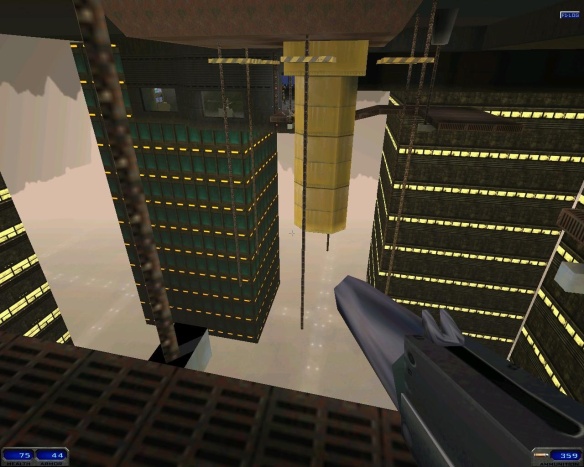 There’s something about blocky, low-poly renditions of extremely grand architecture that gets me every time. 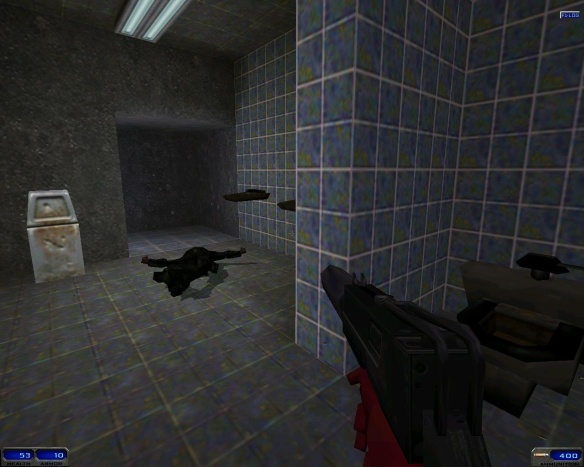 … and toilets. You can judge any FPS on the presence of toilets, and there are plenty toilets in Shogo. They just don’t flush.

In contrast, the mech levels are very very open. Wide streets of futuristic, slab-sided monoliths and canyons with little to no cover are made up for by the strength and firepower of your chosen mech — pleasingly ridiculous volleys of missiles and plasma bolts light up the sky with massive gouts of blood and smouldering wreckage.

As a mech there are many more health and armour packs to be found, though scoring critical hits still repairs you a bit just like in the on-foot sections. Civilian vehicles burst open to create chain reactions and the enemy mechs dance just like the guards as your bullets and lasers strike home.

Your mech can also turn into a faster-moving hovercar mode, but the levels are never big enough to make this function particularly useful.

There is one annoyance in mech mode, in that infantry still scoot around your feet sometimes. It’s hard enough to tell whether or not an enemy mech is still alive in the giant gouts of smoke that follow every impact, let alone track the little specks of enemy foot-soldiers. Soldiers that sit on the rooftops above as much as they walk on the streets and get splattered underfoot.

On the other hand, getting killed by a mech hiding in the smoke just means you get to reload and do it again. Unleashing such massive volleys of destruction is tremendous fun. 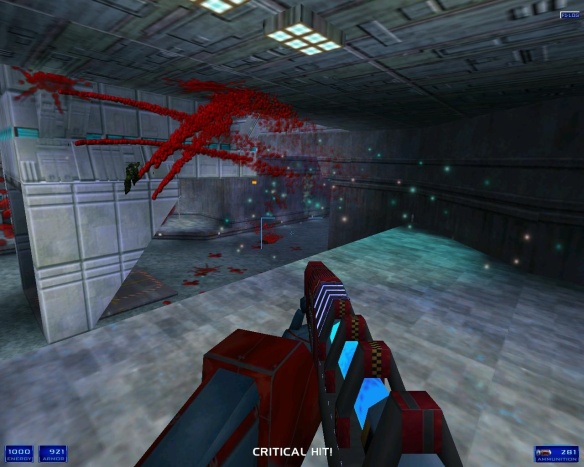 I didn’t think one human body contained fifty gallons of blood… The more know you!

Storywise, it is also pleasantly ridiculous. The plot comprises a sci-fi conspiracy with a delightfully flippant romance sub-plot to counterbalance the horrendous destruction that follows in your wake.

As the on-foot levels sprawl, there are loads of civilians floating around and wandering by them often triggers one-liners and whimsical comebacks.

Non-combat do sections seem a bit weird without a “use” key, though; doors and switches are operated by barrelling into them, and while civilians are all around, you can’t put your guns down to avoid accidental shots. (Especially when you round a corner, see that glowing exclamation mark appear above somebody’s head to indicate they’re alert to you, and instinctively press the trigger.) 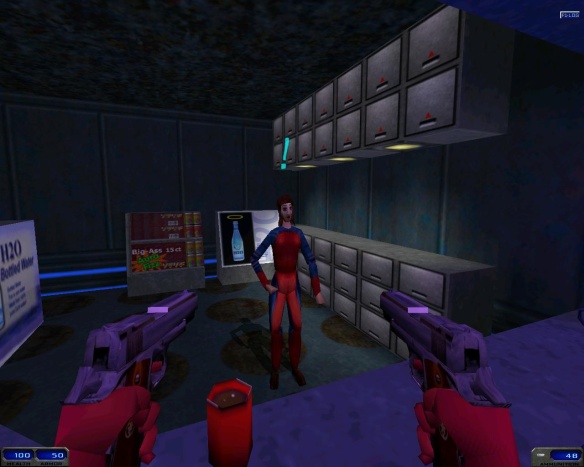 I was sorely tempted to open fire when she refused to serve me alcohol while I was on duty.

I have no regrets. If you’re a fan of the FPS, or a fan of fun in general, Shogo comes highly recommended.

The end of the credits might boast, but wikipedia suggests two mission packs were never made. This makes me sad.