They always say “never meet your heroes”, but I get the impression they should also say “never attempt to rebuild your heroes” because it invariably doesn’t work. I might gripe about bits and pieces of Skyrim but overall I enjoy it, though after 50-odd hours it gets a bit samey. The answer to such saminess? Why, an expansion pack!

The Dragonborn DLC is more than a year old now, but fuelled by a desire for just a bit more variety and not yet ready to drop this unhealthy but oh-so-addictive game, I was enticed to pick up this pack because it’s set on Solstheim, that same snowy place first brought to us in the Morrowind expansion pack Bloodmoon. A pack of which I enjoyed many elements, sure, though (guess what?) I found the frigid landscape just a teensy bit monotonous.

Oh well, that’s what disposable income is for. Let’s see if a little bit of mechanically-recovered Morrrowind magic can liven up the drab chill of Skyrim…

We’ll start with the funny stuff. I ordered a box from Game over the internet, because the box was £9.99 and the Steam download was £13.99.

Seemed like a no-brainer, and I like discs (I also don’t want to dignify Steam by giving it any money directly), but the box doesn’t even contain a disc! So they sent me an empty DVD box with a paper slip in it, somehow for less money (free postage too) than it would cost to solely make the download I had to make anyway!

The video game industry is weird sometimes. I’d have been quite happy to pay slightly more for the box version, if it, y’know, contained a disc. Paying less for it… Well, it’s completely daft but it’s cheaper anyway, so I win this round. 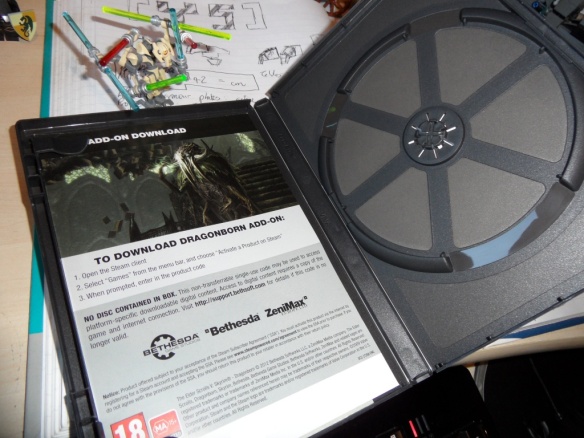 Sense: this image makes none.

At level 51 and with all the most bangin’ home-baked loot money can forge, I figured I’d like to take a step back and enjoy Solstheim a little more… naturally. It doesn’t come with a level recommendation, so…

I went in naked. No weapons nor armour, no stacks of potions and no hoard of stolen food — not even any gold. Nothing but the quest items that I was unable to relinquish. 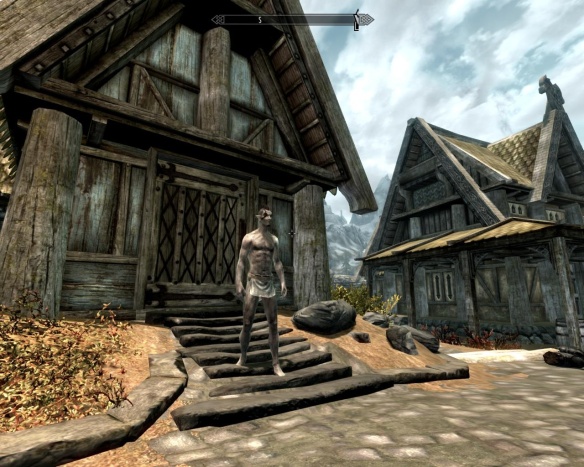 My body is ready.

It took far too long on arrival to find any clothes. Nobody seemed to have left any lying around in Raven Rock the same way as on the mainland. “You’re not as attractive as you think you are,” the guards kept saying.

Solstheim has changed a lot since the Morrowind expansion. I criticised Bloodmoon‘s snowy landscape for the same reasons I criticise Skyrim‘s landscape — both are a far cry from the dusty beauty of Vvardenfell’s ash-soaked mushroom-clad hills. (And Solstheim lies close enough to Vvardenfell that it always seemed strange to me that it had zero flora or fauna in common with the volcanic island.)

It’s not so bad anymore. Raven Rock has gone from being a quiet little Imperial mining town to a fairly classic Dunmer settlement, complete with crab-shell houses and a canton-shaped temple, like a tiny version of Vivec (the city, not the god-king). Columnar basalt is everywhere in the ash-covered bottom half of the island, while the snowy top half is decidedly lumpier than I remember it being. 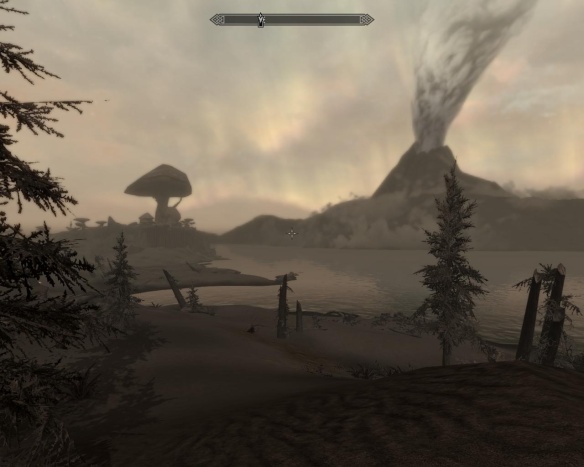 You can’t quite make out the Ghostfence from here… 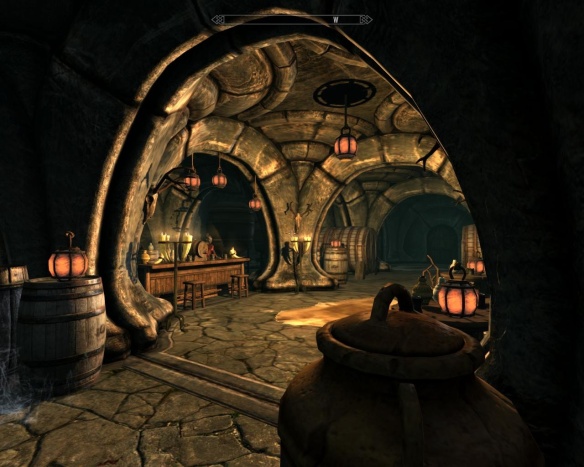 The interiors are very close replicas of the originals, though considerably more spacious.

The main problem with my whole going-in-naked thing was that I was still level 52, just hideously under-equipped, so the game kept spawning Draugr Deathlords and other things that couldn’t be swatted with an unenchanted steel sword. Especially when I resolved to focus on One-handed, Block and Light Armour — skills in which I had low aptitude. I traded my mastery of Enchantment and Two-handed for Legendary status so I got a few more perks to balance myself up a bit.

Having said that, it certainly lent some more interest to combat. Enemies I had previously killed just by looking at suddenly became much more challenging foes, requiring circle-strafing and other fun tactics to allow time to heal up in battle (no potions yet, remember). 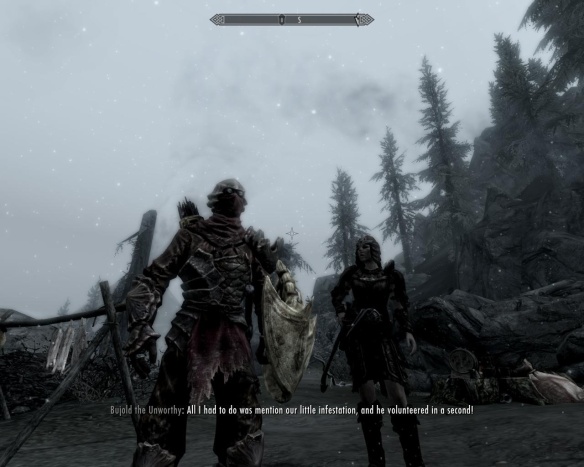 Once I got me some chitin, though, they couldn’t keep me down. 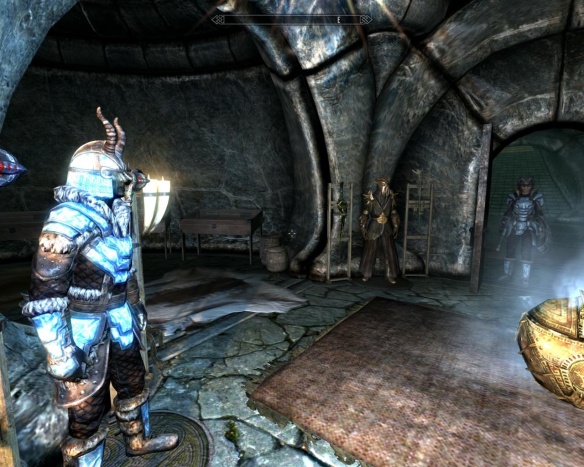 And when you’ve found too much armour and nobody can afford to buy it off you, you can get yourself a house and put it on display on these handy mannequins!

Since I am a big fan of RPGs purely because they are manly(ish) dress-up games, my nakedness was merely a precursor to exploring the new clothes and weapons on offer in this expansion.

Bonemould and Chitin are the new Heavy and Light armour staples respectively, though Chitin can be made Heavy. (Both might well have been Medium in Morrowind, but my memory is weak and nobody likes to mention Medium armour anymore.) Both appear under the traditional Smithing perks, so I already had access to them, while the shiny Nordic Carved armours are a slightly fancier take on normal steel fur-fringed basics.

The big selling point here is Stalhrim. It seems like Bethesda actually anticipated my last entry about Skyrim, because although it requires the Ebony Smithing perk to make, you also much find out how to craft Stalhrim from a native Skaal smith. Hopefully this bodes well for the next Elder Scrolls title. 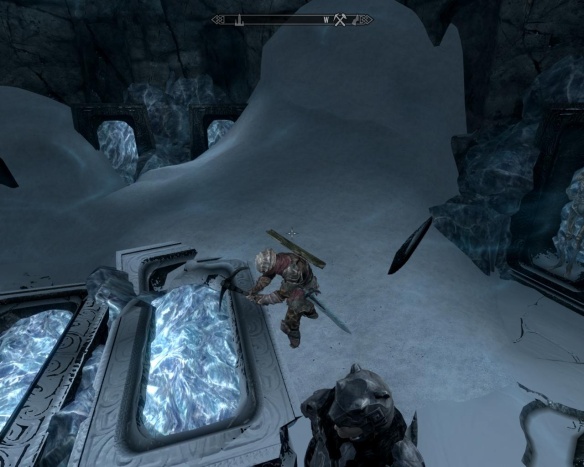 The main plot of the expansion is about the first dragonborn Miraak and his dabbling with the Daedric prince Hermaeus Mora. It’s over in about five minutes, though it’s worth it for the Bend Will shout that gets you riding dragons.

Not because riding dragons is any good, mind you: you have no control, you just sit there and tell it to fly or land and watch the annoying rollercoaster while, just like in actual battles, it takes ages to come down because it can’t find a safe landing perch. No, it’s good because taming dragons is an instantaneous way to end any annoyingly-timed randomly-spawned dragon battle. One shout, one kill. 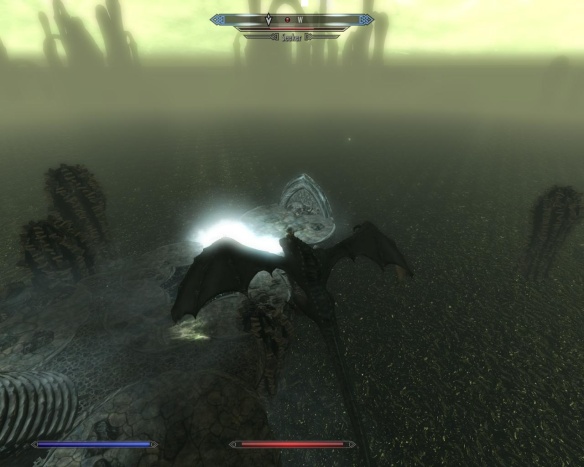 “How can I serve you, thuri?” By getting outta my face!

Mixed in with the main plot and as side quests are bonus extra-dimensional dungeons in the form of Black Books.

A bit like Oblivion Gates, Black Books transport you to the Daedric realm of Apocrypha where you must reach the end of a small dungeon. Far more mechanically varied than the few long and repeated pockets of Oblivion, they do suffer from an extremely limited visual palette — and with some tending towards mazelike expanding and contracting corridors, it’s extremely easy to get lost just because there is only one wall model. And there are only two types of enemy. Ho hum.

The advantage, though, is that you get to choose a bonus ability from three options at the end of each book. My favourite has to be the one that stops companions from getting hurt by destruction magic, wild sword-swings and shouting — no more accidental kills, huzzah! (Too late for Lydia, alas.) 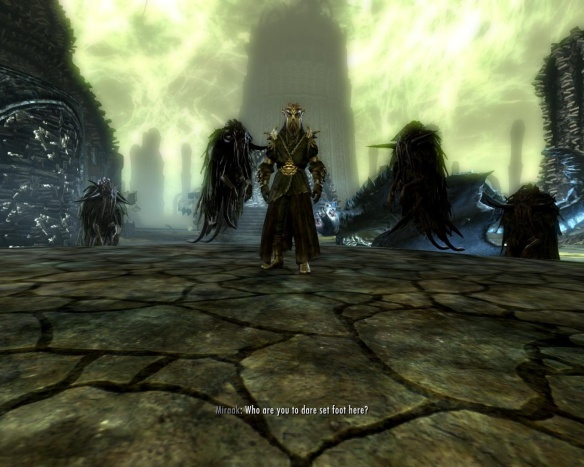 Oh, and Miraak? Cthulhu called, he wants his mythos back.

While the main plotline is pretty short and over in barely a couple hours itself, Solstheim offers plenty more exploration and new opponents and new ingredients and ores to gather.

All the big landmarks on the island remain from Bloodmoon, with the likes of the glacial Castle Karstaag reduced to ruins and the Bloodskal Barrow being considerably larger and more epic than last time. Kolbjorn Barrow also gets a quest that is a pale echo of the original founding of Raven Rock; you return several times to explore the barrow in stages as it is dug out, with a large encampment growing around it each time. 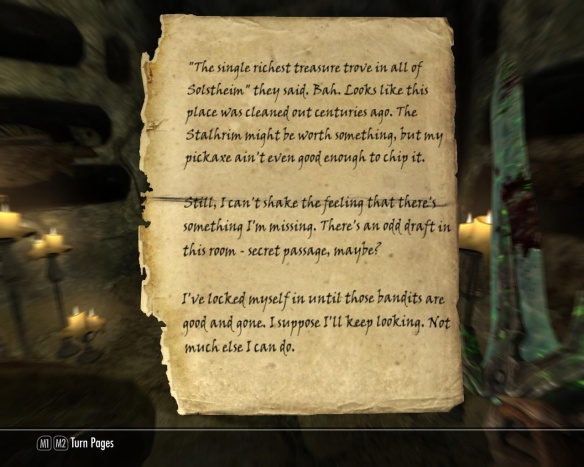 Oh I’m sorry, did the Nerevarine get there first? Nah, he wouldn’t have left any Stalhrim unmined. 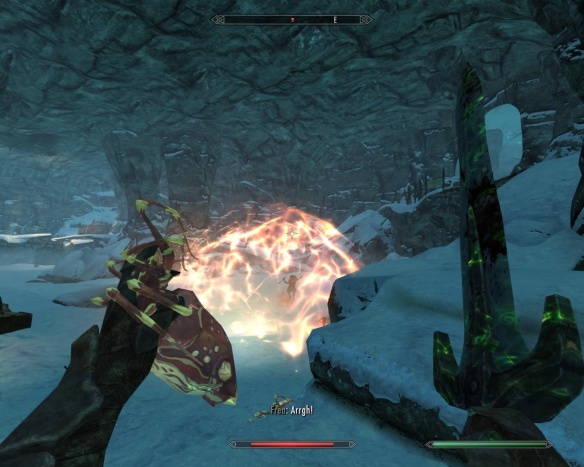 I was originally going to complain about the addition of a different kind of spider, then I found the forge that creates them as grenades.

Yeah, it’s actually pretty cool. A refreshing new landscape, new clothes, more nirnroot than you’ll ever need and many more sweet little touches make it plenty nice. It’s not exactly large and you need to put in a bit more effort to discover its content than the main game (which just throws quests at you all the time), but it’s overall a fair expansion pack. Maybe for £9.99 rather than £13.99, mind you. 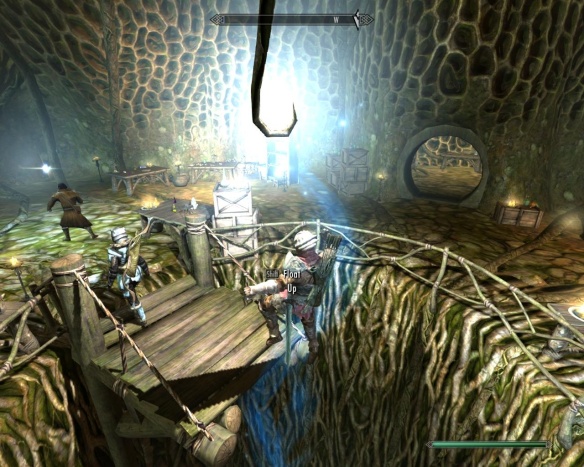 “Press shift to float up” is a far cry from Levitation magic, but at least they didn’t put stairs in.