These days, the final boss is never the end of the line. If it’s not a hilariously blatant multi-sequel hook, it’s a post-game side quest that can only be completed in co-op with four level 50 characters. (I’ll never be able to finish that, you bastards.)

And then there are four chunky DLC mission packs to get through. As if 35-odd hours of grinding the main game wasn’t enough…

Perhaps the most notable element of all this is that the DLC packs are immediately available. Despite each one appearing to be set chronologically after the main plot has concluded (with Tiny Tina’s opening cinematic coming complete with a nasty spoiler), they all become accessible from the Fast Travel network as soon as you get access to that — after leaving the tutorial, you are quite free to teleport to missions pegged at level 30. Indeed.

The other issue lies right there: all four packs start with quests pegged at level 30. Now I finished the final boss just over level 34, which meant that even before I had completed the story I was well primed to start any one of the packs. Which implied that, no matter which one I chose to begin, I would soon be quite overlevelled for the others. 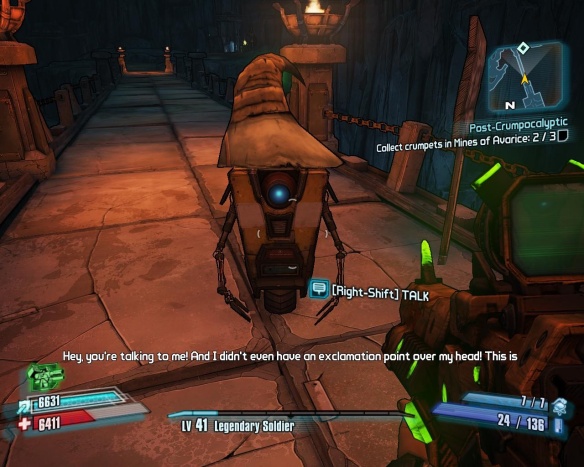 It is, and always will be, all about the Claptrap.

Captain Scarlett and Her Pirate’s Booty

Well, my levelling worries were mostly unfounded — this whole adventure remains pegged at level 30, with the occasional level 32 boss. Definitely the first one to play.

Otherwise, it’s more of the same with a salty sea-dog tint; the enemies are no longer bandits and psychos but buccaneers and rapscallions and so on. The vehicles are also replaced with a new Star Wars-y sand skiff, which is a too-slow hovering vehicle that cannot drift. (It can’t jump and it feels like it should be able to — and that’s a whole new “pancake” challenge right there.) It’s also set in a desert so, although there is the usual environmental grandeur, we’ve been there so often before.

I’m pretty sure Scarlett is not voiced by an actual English woman. Her accent sounds subtly… wrong. Her honesty with regards to her eventual inevitable betrayal is refreshing, but they play the same joke again in Mr. Torgue’s Campaign of Carnage (though in a slightly different manner and not so drawn out). 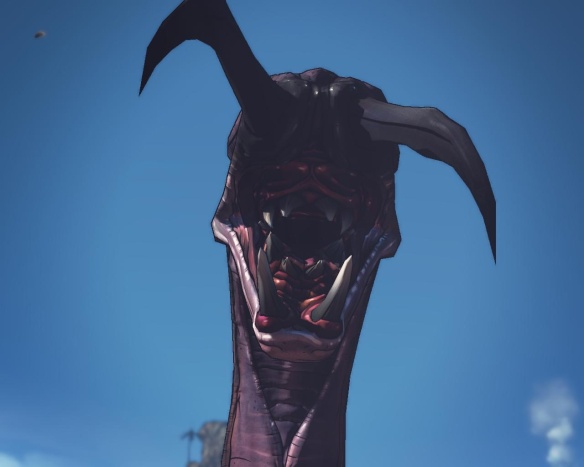 Yeah, starting at level 30 but escalating just a little bit over its course, Mr. Torgue’s Campaign of Carnage feels like an appropriate follow-up. There are some quests that repeat three times to end up at level 50, but otherwise it’s a fair 30-35 ride.

The hallmark of this pack is Mr. Torgue and his extremely shouty and over-the-top muscle-man wrestler demeanour. Aside from some the shouting, though, there’s nothing much of note here either. The shouting is quite funny, but I can imagine other people finding it tiresome. I have a terrible sense of humour.

Well, the final boss would have been truly awesome if I wasn’t so over-levelled it went down in under two minutes. Heurgh.

Winning the DLC unleashes the phattest lewt, unlike the hilariously bad lewt released by the final boss of Borderlands 1.

Well, Borderlands 2 certainly is a big game. Big Game Hunt, however, isn’t that big. It only feels big because the new fan-boat vehicle is extremely sluggish, and the terrain is lumpy enough that its rocky little streams slow you down even more.

The action also takes place under some kind of plateau, so it’s permanently gloomy — unfortunately, this gloom seems to be artificially generated by a filter washing all the colour out. For a game that’s normally so vibrant, it’s rather unbecoming.

Even though the enemies start around level 31, they seem fundamentally tougher than the level 31 enemies of, say, Captain Scarlett. Once you reach the second area the quest levels jump straight up to 35, so this is definitely second or third. The balance of these packs is a bit weird. 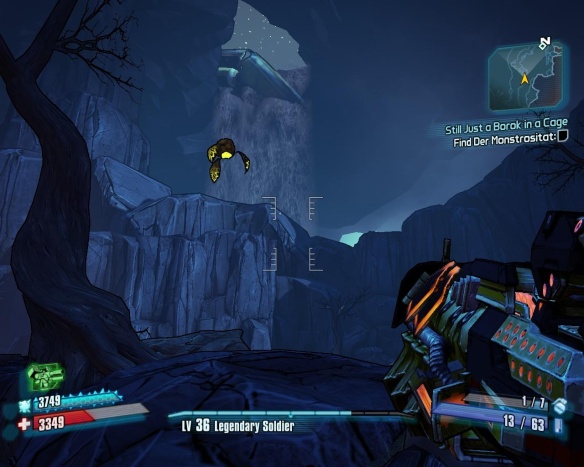 Floating spores are mostly non-hostile unless disturbed. In which case, they are horrendous acid/fire/spark-spitting bullet-sponges.

I do love a bit of D&D, but it’s still ripe for send-up in this mend-bending adventure set in a tabletop RPG played by Lilith, Brick and Mordecai and DM’d by Tiny Tina. They break their own fourth wall profusely, but then again, you can Fast Travel between this game and the actual game so I guess that sort of consideration wasn’t really top priority.

A set of mostly linear and fairly short areas gives plenty of variety and forward motion, with most of the cast of the game making some kind of appearance in medieval-fantasy form through generic fantasy-world locales appropriately lambasted with silly place names. All the jibes and the banter builds up to a surprisingly effective character finale, which might bring a tear to the less cold-hearted among us. Definite kudos for that.

Either way, there’s plenty of material here so it definitely feels a lot more wholesome than any of the other packs. If you were to get only one, this is surely it. (Maybe worth noting that the other packs appeared to have been made in conjunction with other software houses, while this one seems to be pure Gearbox.)

The level indicators jump fairly quickly to 35 and enemies finally climb up to 38 and 39, so this is the last piece of the puzzle if you’ve got the lot.

It’s worth completing this quest just for the punchline of Mister Torgue screaming “WHAT THE F**K IS AN ESPORTS?” Oops, spoiler.

As if Borderlands 2‘s level 50 end-game raid boss that has to be done co-op with a full house wasn’t bad enough, each of the DLC packs adds another to the pile. These dirty co-op-only bosses are the only things standing between me and those sweet “All Sidequests” cheevos!

Borderlands 3 is going to be an MMO, mark my words. People don’t play games alone, they don’t want to live such a sordid existence. No, all games are better with friends. Hell, I don’t have many friends, and I have even fewer who will grind sixty-odd hours to join me. It’s not fair…

On the other hand, I paid £20 for “over £75 of content”, so it sucks to be an early adopter who bought all the bits seperately. These annoyances aside, I can’t deny I’ve had my money’s worth. 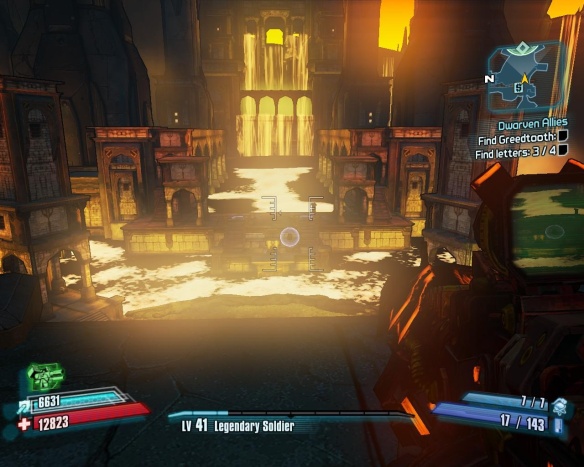 As with the parent game, the environments remain consistently spectacular to lend gravitas to your irreverent slaughterfest.

Well, if you enjoy Borderlands 2 then there’s plenty more of it on offer here. If you’re ambivalent, or had quite enough after gorging on the main game, then there’s nothing particularly exciting in its various mission packs to draw you back. As noted above, the only one that deserves any real interest is Tiny Tina’s Assault On Dragon Keep, though its pop-cultural references are extremely current so it’ll probably date realllly badly.

Well, that’s me well over sixty hours in with all the main plots complete. Just a few more side quests to clean up, and let’s see if we can’t solo a couple of those raid bosses…