It seems like you just can’t pre-order a limited edition Marsheaux album without a crisis. Bonus track compilation E-bay Queen is Dead took ages to arrive because of some quibbling with the manufacturer, and the same thing happened all over again with the limited edition version of their new album Inhale that I gleefully pre-ordered.

Sure, it’s a small run, but once the factory has committed to producing something they kind of have a duty to do so without constantly displacing it for larger clients… right?

Oh, the things I do for autographed loot.

The Slow Boat From Greece III

I’d been waiting for this album for ages anyway, so another month or so on tenterhooks wasn’t ever going to kill me. Even so, UNDO Records kindly offered a free MP3 download of the album while I waited for the real thing to ship… I was originally intending to hang on for the CD rather than delving into Spotify or whatever, but hey, if they’re going to give me MP3s in the interim I ain’t going to miss a fly wee listen on the train home.

Okay, so that “fly wee listen” did rather quickly turn into the usual once-a-day run that occurs for high quality new albums. Inhale is some seriously good stuff. 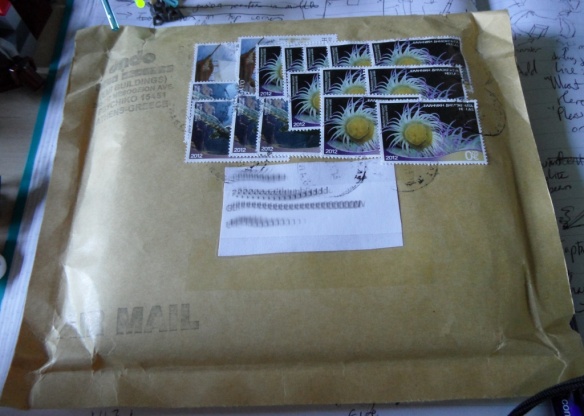 It takes more stamps than you can possibly imagine for Marsheaux CDs to get here from Greece.

Marsheaux seem to be on a consistent upward trend. With each album the arrangements get more complex and nuanced, while the synths get ever deeper and richer, and Inhale most certainly marks a new high-water mark. Every song is deftly composed from layers of trilling sequencers woven through with throaty bass lines and syrupy leads.

Even so, Inhale is mostly a very sad album, in comparison to their dark but strident previous album Lumineux Noir (and the happy-go-lucky debut E-bay Queen). Although the opening track Self Control once again captures the feel of Mediterranean sunset beach parties (first noted in their cover of the Lightning Seeds’ Pure, and not to brag or anything but they commented on that very blog entry of mine when it was on MySpace!), the rest of the tracks tend to slather the upbeat music with ambiguously melancholic lyrics and vocals.

This is the second piece of autographed loot in my collection, joining my Dazzle Ships remaster.

I think fourth track To The End may be one of my favourites on the whole album, and possibly one of my all-time favourite Marsheaux songs. It starts with an unassuming synth-bass but builds and builds over the course of the song, from softly whispered words and a couple of melodic layers to a lovely crescendo built of interlocking vocal tracks and synth slabs. That’s craft right there, that is.

The following song Come On Now takes a differe tack, riffing off the Human League’s Empire State Human in the same way OMD’s recent Metroland riffed off Kraftwerk’s Europe Endless — it’s clearly inspired and constructed along the same lines, with its bouncy rhythm and semi-spoken verses. Even so, it’s classic Marsheaux through and through, but amped up and fleshed out; you can contrast it to their very own cover of Empire State Human from their early days for proof of how much they’ve grown. (Apparently that cover is a live favourite, so COUGH COME TO SCOTLAND COUGH ahem. Gosh, I say that every time… When will my wish come true?)

Further down the line, Never Stop is the kind of song I’d play over an epilogue. I mean, its anthemic drums and uplifting synths sound like they would fit perfectly between the final boss and the end credits — the bodies are piled high in the streets, the buildings are in smouldering ruins, but the villain has been defeated… As our heroes emerge from the dust to survey the destruction, the sun ignites the dawn sky and everything’s going to be okay (isn’t it?).

Over and Over is another mid-tempo tragi-ballad. The notable feature here is that there’s a breakdown in after the first chorus and at the end which uses a peculiar record-scratch type sound, in areas that feel like they could rather do with synth solos. It’s an interestingly experimental touch, but it feels slightly out of place in an otherwise delicately-crafted song. (I know Marsheaux are fans of Orchestral Manoevures in the Dark too — I wonder if they’d ever consider doing a full-on Dazzle Ships on us? E-bay Queen had a couple vocoded/speech-synthed bits that were suspiciously Kraftwerkian.)

Can You Stop Me (Extendead Version) closes the album on a beautifully tragic low note (as one might expect from its pun-tastic subtitle). Ostensibly a four-minute pop song, it looks like things are turning up for the finish, but as the refrain echoes out for the last time, the wispy, ethereal backing synths come in again for a reprise. Mournful telephonic whispers overlay some tentative bass notes and a few plaintive bleeps — it’s almost enough to bring one to tears (in the good way).

Overall? It’s always a bit embarrassing when you fork out for a special edition of something that turns out to not be that good (cough Mass Effect 2, cough Human Revolution cough), but there’s no risk of that here. I’m absolutely delighted with Inhale and the autograph just makes it all the sweeter.