Right from the beginning, I was all up in Warcraft III‘s singleplayer RPG scene; a combination of a love for romance sub-plots and limited internet access made it the natural choice. So in this series, I’m finally going to discuss some of those maps that had a big impact on the way I do things…

Today: the venerable The Devil Made Me Do It by nightingale

The Devil Made Me Do It

The Devil Made Me Do It is a story-driven RPG map with a difference. The style in which the story is told is fairly unique, and the twists and turns are second to none. While most people go for a definite villain, The Devil Made Me Do It constantly surprises as alliances are forged and broken and everything shifts around you.

It’s the story of a man with a dark past. He’s on the run, he’s trying not to think about whatever came before, but he’s being haunted by a Succubus that keeps tormenting him — but nothing is as it seems. (Is it ever?) 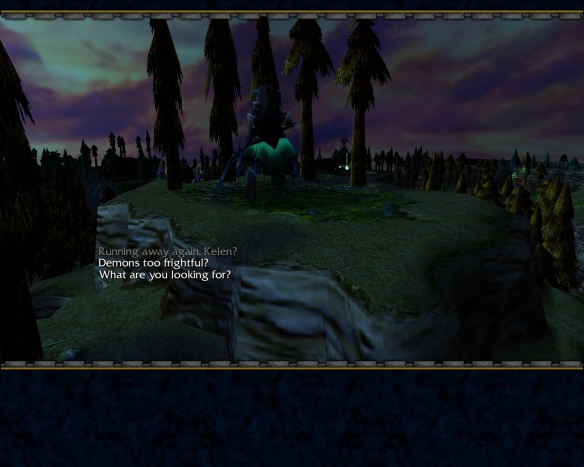 Why is she looking through the trees instead of over the open vista behind her???

I can’t talk more about the plot without spoiling it. The way the Succubus interjects every so often is fantastic, though — while the game’s cinematics are usually traditional portrait conversations, the Succubus’ niggling is represented by middle-of-screen text messages that are presented in short bursts to give a real sense of some kind of telepathic monologue. It is, quite simply, exquisite. 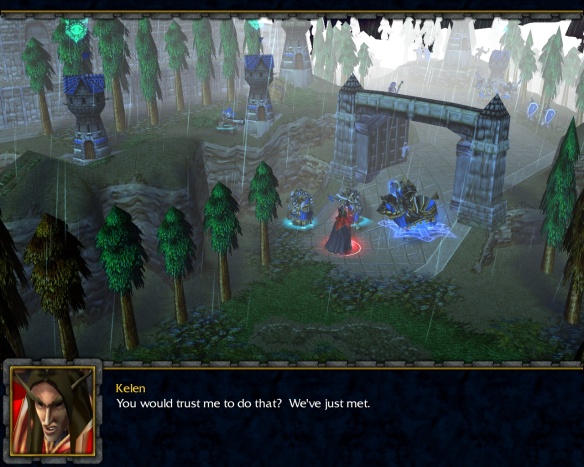 Why do things yourself when you can use untested mercenaries instead?

The game’s other strength is that the twists and turns in the story are reflected by twists in the gameplay. Each phase gives Kelen a new variation, with different abilities, meaning he never has the chance to go stale. Just as you think you’re getting the hang of an ability suite, he’s off and upgraded again to something new — and quite often with a change in scenery and pace too.

That change in pace is more often than not an entire mini-game. There are three AoSes and a melee-lite base defence (not in that order), though each of the AoSes is slightly different and obviously has a different version of Kelen to play with. The first is a a straight forward tug o’ war, the second includes two heroes per side… The variations just keep on rolling.

The singleplayer AoS is the greatest genre that never was.

The cons are few, but they do exist — it’s fairly difficult. Unlike The Legend of Magnador, most of whose difficulty can be offset with a bit of grind, The Devil Made Me Do It is prey to level caps during each chapter (not to mention a severe lack of respawning opponents to grind).

The tightly story-driven nature of the map is in this sense both its strength and its curse; if you’re not quite up to its challenges then you may find yourself having to crack open whosyourdaddy a few times, because there are no optional deviations to help you even the odds. This RPG is all main quest.

It’s also fairly short. It took me about two and a half hours to go through at a leisurely pace, but it comes to a satisfying conclusion and I guess bulking it out any more might have risked fatigue.

Bloody undead, they get everywhere.

I call it an RPG, but it spends a lot of time delighting in not being an RPG. It has its fingers in all the pies, and they’re all seamlessly blended together. It is the mapping personification of the rollercoaster ride, in its mechanics and in its story. Everybody loves when gameplay and story mesh, don’t they?

If you want a focused storyline with loads of gameplay variety, then this is the map for you! 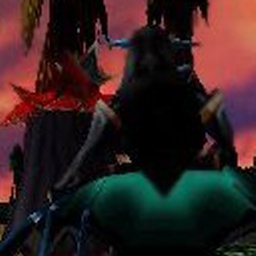