Let’s leave terrain for now, that’s easy. Or at least, will be easy but since I plan to make some nice big prefab props may be a little time consuming. Let’s see how far we can get before lunch-time rolls around.

Arena Y4 is going to be an octagonal deathmatch for four players. They will each be equipped with a production AP-AM, the Epsilon, that is mostly the same as the prototype but for one major difference: the artillery cannons have been replaced with an “EMP Burst Pack”. No prizes for guessing what ability that bestows.

Every player will begin with the most basic equipment. They will each have a little home-base repair pad at which to purchase items and equipment between rounds. The game will continue indefinitely until people can’t be bothered anymore. Respawn may occur either in the arena itself or in the home-bases. The arena is quite small so probably safer to do it in the bases; in the bases, heroes will be invulnerable and entering an opponent’s base will destroy you. There won’t be any backpacks, since equipment won’t be acquired in the arena itself.

I will commence with a basic points-driven deathmatch round: wild animals in the form of drones, one point per drone kill and maybe three or four per hero kill. First person to X points wins the day.

I think it’s going to be set on a satellite. Satellite City… Then I can use SpaceLoop as the background noise and not worry about all the ambient factory sounds that wouldn’t be present here. And some giant prefab doodads can spill their decorative bits over the map edge and I don’t have to worry about unsightly borders. I was thinking I might do it set on Earth in the rain (rain makes everything more atmospheric), but that would require making trees and we all know I ain’t ready for that shit.

Camera won’t be locked because the arena itself is pretty small and open. Setting the bounds so often is also a bit of a performance drain and we don’t want to get too bogged down in a multiplayer situation where factors like lag become an issue — though since the Epsilon doesn’t have artillery shells, we could go back to traditional camlock… I think I’ll keep the radar pulses for the minimap, though, that stuff is cute.

11.00am rolls around and the conversion of dedicated singleplayer triggers to multiplayer triggers proceeds apace. Maybe I was a little sloppy during Y4 here, too; while the core item limit system is the same old system I tutorialed years ago and is designed for multiple unit use, a lot of the extended subsystems necessary for the AP-AM’s fanciful functions like Overdrive were never anticipated to be used like this.

Hey, don’t bag me — that’s proper agile methodology, only designing for now rather than some nebulous future that might never come to pass. Refucktoring is just part of life. If you’d told me I’d be turning Project Y4 back into an arena two years later, I’d probably have laughed in your face,

Of course, things start to get really fun when PLAYER_Hero is turned into an array, because I used PLAYER_Hero in lots of silly places when I should have been using (Casting Unit) and other such generic event responses. Naughty naughty!

At 11:41am I begin to flag and, despite how lunch time looms on the horizon, the first chocolate is consumed.

Gosh, cutting all that stuff out has made it save really fast. No longer do I have to keep playing Lego while it saves, making the build-up of this journal rather embarrassing as it steals real development time rather than unstoppable downtime. Whoops.

It’s 12:00pm and it’s time to exchange BBC Radio 2 for some MP3s as Ken Bruce secedes the airwaves to stuff nobody cares about — we begin with a recent Ultravox B-side, 7/8, followed by Richard Harris’ impeccable rendition of MacArthur Park. We don’t want to crack open Dazzle Ships just yet, lest it be interrupted by an unpredictable lunch, but rest assured — it will come. The Concrete Hands are installed at the centre of the arena, with an Arthstone Projection for good measure.

Chair-dancing makes it harder to map but I never let that slow me down before. 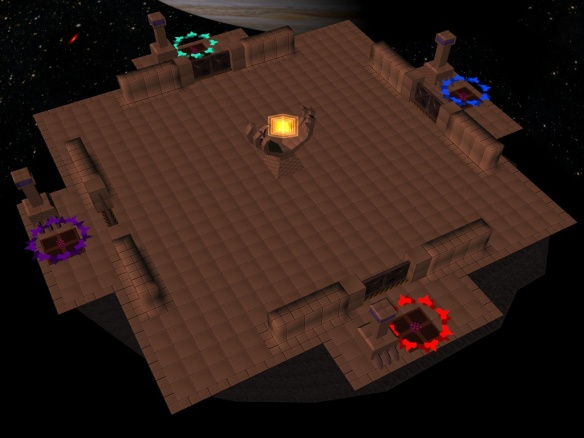 What do you mean, I haven’t fixed the skybox yet?