So, yeah, that map I call Brownscape: Torment, to the endless delight of everybody in the real world who makes out like it’s a poop joke, and to the consternation of all the internet people who wanted it to be more like Planescape: Torment.

One simply cannot win when one takes arbitrary words and then mangles them together, but I’ve been doing that since before I can remember so I’m not going to give up now.

I think it’s going to be called This Desert Place, thereby taking The Twins’ confusingly titled The Desert Place as its theme tune (though this won’t displace the glorious slowed down intro from A-ha’s Cold As Stone in the opening).

A fairly “obvious” name, but not entirely one that I was expecting. Naturally the desert theme had brought this song to mind before (I asked Santa for the album this crimbo; not sure if I’ll want to use the album or single mix yet), but it wasn’t until I was writing a plot critical piece of text recently that the phrase flared into some manner of importance. I had to sit down twice to continue taking notes during that lunch-time walk (I got a seriously cold bum); it was a mucho productivo day. 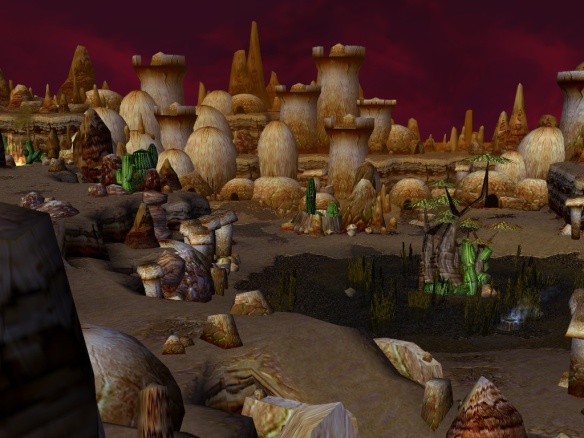 How many times can I say “dessert” instead of “desert” before it gets too old?

I was previously looking at Morten Harket’s Out of My Hands in terms of mood and style, but some of the lyrics put it completely at odds with some of that annoying plot stuff I’ve already established. Hey, at least I’ve started writing before implementing things instead of just rolling onwards until the plot is an unstable tower tottering on silly heels!

The mood-board also contains the likes of Ultravox’s Visions in Blue. The classic line “ashes of memories still aglow” does resonate with the forlorn, declining society of the Shul’kra, but it has yet to acquire any significance. Bolstering A-ha’s contribution to the soundscape, as well as Cold As Stone we’ve got East of the Sun bringing in some more desert vibes. To round things off, there are two B-side instrumentals from The Thompson Twins; Nurse Shark and Still Water (Storm On the Sea). I know there isn’t much water in the desert, but they’re both incredibly atmospheric in an appropriately broody kind of way.

Gosh, with all this talk of mood-boards, I almost sound like a professional.

How does one “forge” chitin anyway? Bah, let’s gloss over these trivial details. More likely they’re for firing clay.

All these pretensions extend beyond the music, too. In previous Warcraft-based outings, I’ve been more than a little guilty of mish-mashing architectural styles with little regard to who actually built things and why. I tried to blunt it a bit in This Wreckage but I’m not convinced I was particularly successful. (Surely the Empire’s buildings should still have been tan-coloured stone, because they couldn’t have sailed all that way with a hold full of Empire-quarried stone?)

This time, though, there’s going to be an attempt at a bit of environmental storytelling. The modern surface parts of the Shul’kra Hold are all rugged mud-brick supports and plaster globules, as befits their original insectile desert-living inspirations. Underground, though, there is evidence of an earlier era of considerably finer stonework…

Deepending the mystery, one hopes. I guess we can use this project to measure whether being pretentious works better than just throwing things together, by comparing the output to my more flamboyant earlier works. 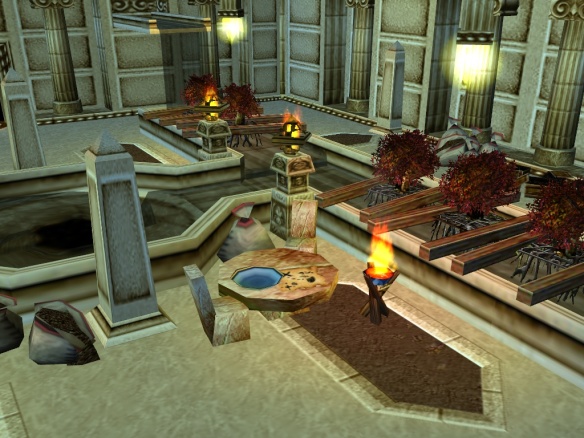 The annoying thing about this map is that it’s all well-established, traditional RPG mechanics and systems; its progress is marked solely by the progress of its story rather than the meandering of its gameplaye design, and we all know that spoilers abound (especially in a map that isn’t intended to be particularly long). Everything that can be talked about here has been talked about a million times before.

So you’ll just have to make do with this meagre selection of new screenshots and assurances that my notepad is bursting at the seams with hastily scribbled notes about plots and potential sub-plots and that I am slowly implementing these things.

Some soldiers from a faction you may recognise soon camp out in one of the Tavern of Broken Wings’ rather spartan suites.