As the old Andy Willams song goes, “it’s the most productive time of the year”. Project Y4 might have been on the backburner since its release, and Brownscape: Torment may be revving up in the shadows (it might even have a proper name soon), but three years after Arena Y4 surfed into life in the run up to crimbo, it seems only right that we take the season of joy and love to open up the dialogue about R02 — the long-prophesied content-focused update.

To begin with the basics, I have already worked up some new pieces of equipment which you may choose to use in your fight against the drones and whomever is controlling them. Gosh, it’s been out for months and I still have to pussy-foot around spoilers.

The first item is the easiest — it’s the Prox Mod for the artillery guns. Nothing new here; it allows you to place landmines at a distance. If your aim is a bit off, then your shells are at worst never wasted and at best right in the path of an enemy. Combine the Prox Mod with the Extended Magazine and carpet the place.

Next up is the Aegis. Inspired by an associate, now known as Gyro but previously known as Aegis (you don’t remember the ill-fated Steel Titans mod, nor its 10,000-triangle sphere. I remember for everyone), this is the long-awaited invulnerability undercarriage mod

Naturally, we already have the Disposable Barrier consumables — these single-use units create impenetrable shields at the cost of burning through stupid amounts of taschari, such that they can only protect you for seven seconds and then are broken forever. The Aegis takes a different tack: while each activation only lasts for one second, the unit recharges itself within ten seconds for another pulse. You’ll need to keep your eye on the battlefield to make best use of the Aegis to block attacks when it counts. (Durations are subject to balancing.) Overpowered or too fiddly for words? We shall see. 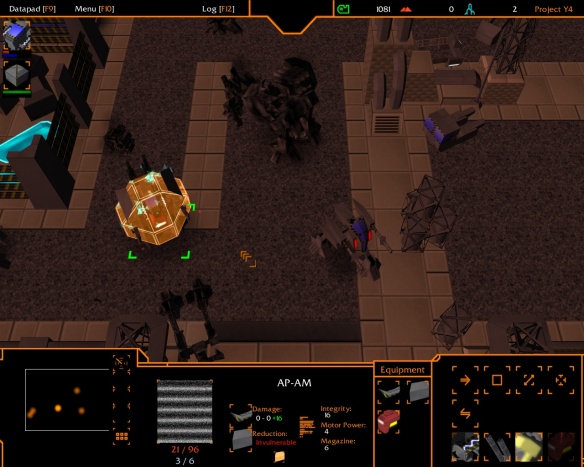 The main goal is to let you play chicken with Alphas and the final boss.

To round off the equipment side, I have a new permanent upgrade in mind in the Projector Kit — something I wanted from the beginning but never quite found a way to implement. I originally intended it to be a permanent base damage reduction, but unfortunately Resistant Skin-based reductions cannot stack. Then I realised that more hit points are basically the same thing, so the Projector Kit provides an additional 16 hit points by shielding key areas of the chassis with permanent low-resistence barriers (as opposed to pure-mad-mental-power-consuming high-resistence barriers of the disposables and the Aegis).

Now the AP-AM can be lit up like a bloody crimbo tree by the time you hit the finale!

While the Prox Mod is purchasable from near the beginning, both the Aegis and the Projector Kit are hidden behind quest walls. The Aegis first consists of components A and B, so you’ll need to hunt both of them down before you can unlock the mythical device itself. Next to that, the Projector Kit is only one item — but you’ll still need to gather all these bits up and cart them to the North Research Bunker for assembly. For a price.

They’re just like quests, but you know the reward beforehand and there are no men with question marks over their heads. How fashionable!

The Question of Quests

Speaking of quests, there is the question of Operation: Gala’s Trench. It’s one that I’m still having trouble answering — I know what I want to happen during the mission, and I’ve got plans to integrate some procedurally generated content too, but there are issues of artwork. I’m still not quite happy with my ice props; I can’t quite get the glaciers looking perfect, and I’m worried that, after the relentless dull beige and  brown of the main game, I might just burn everyone’s eyes out with the glare-tastic blues and whites.

I’ve always been happy with the ice overlay, but everything my mind’s eye sees for the glacial wall blocks just can’t seem to come out right.

So we probably won’t be seeing Gala’s Trench in R02.

But I’m not going to leave you hanging; instead, I will be beefing up the main game some more by reopening the Necropolis area. Accessible via North Bunker 01 (it’s getting a lot of attention for some reason), the Necropolis is an area with memorial monuments to people that have died at the facility. It’s guarded by the fearsome Dazzle Alpha that was mentioned before but never made it into R01, and if you can tank him then you’ll be able to paint yourself in that lovely dazzle camouflage forever more.

There may also be more bangin’ loot hidden there later. 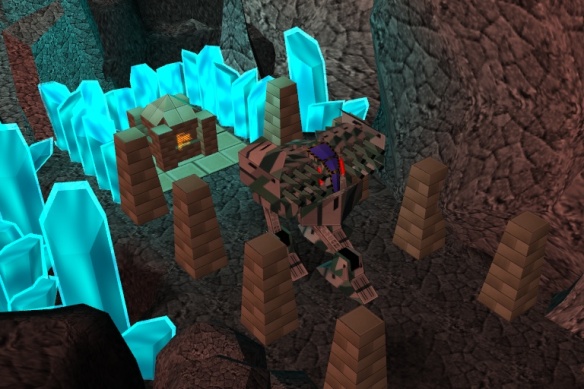 The Dazzle Alpha isn’t the only thing that’ll be hiding out at the back door, though — the crater is honeycombed with caves and hidden passages (as evidenced by the G1 Technology strike force being able to get so close without being detected), and this area is no exception.

This time it’s pirates — did you really think those few crappy Glabrezus at the start were the end of the line? The infamous pirate ringleader Marseille (formerly of Marseille Systems, that went down the tubes when their CEO went rogue) has arrived and he wants to pit the AP-AM against his own custom-built mech, the Hook Horror.

You’ll be able to choose whether to play “honourably” by the rules of his challenge or slaughter all the pirates. Either way, you’ll end up with the legendary Marseille’s Ricochet — a devilish undercarriage unit that shoots bouncing blades (hence the name). Other effects of your choice may vary.

I’ll give you three guesses as to what map contains “Marseill’s Ricochet”. Hint: while it is mechanically UT’s ripper, it’s named after a shield.

I’m not going to talk timescales for any of this, because that will inevitably target my bum for future biting when I fail to meet the deadlines. Whether that’ll be by feature creeping a huge pile of new content or simple laziness, we’ll have to wait and see.

And if you think the game’s missing any howlers (except music and voices, those are still long-term goals), or there’s a geographical/temporal location that seems awfully devoid of interest, now’s your chance to talk!