Right from the beginning, I was all up in Warcraft III‘s singleplayer RPG scene; a combination of the desire to explore everything, which is shared by nobody else, and limited internet access made it the natural choice. So in this series, I’m finally going to discuss some of those maps that had a big impact on the way I do things…

The Legend of Magnador is a brilliant piece of work. It’s witty, it’s well crafted and its presentation is extremely polished and professional. Its story is twisty and exciting, constantly lumping more layers onto its central mystery before dramatically turning the macguffin on its head. Sure, it’s got a touch of the old amnesiac hero, but this is treated well and it does take place in a magical dream world.

Even so, the fact that it’s a dream world isn’t just an excuse for lol-so-random — indeed, it’s actually a prime example of where lore and story reinforce the gameplay mechanics rather than awkwardly dancing around them. While neatly buddying up to established expectations of how a WC3 map should function, it gently pushes the game away towards a purer form of RPG: the lore is totally original, but it recycles the base game’s “Hero” concept in an interesting way. 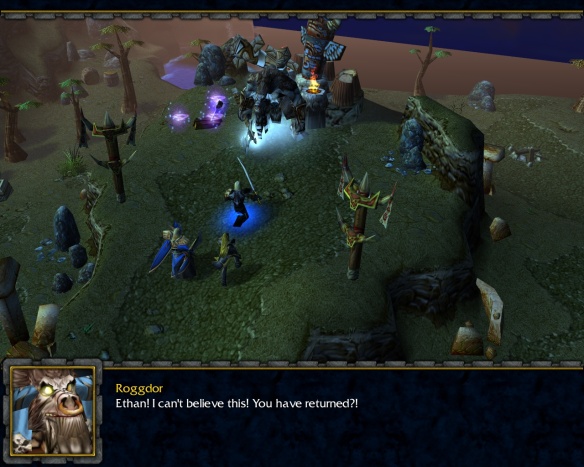 It’s not shy of co-opting WC3’s races either, but I think everyone is guilty of that little foible.

It’s got a bit of an obsession with walled-off areas of the map. Combat doesn’t occur on the overworld; rather, there are wandering dummy enemies that represent squads. On being caught by one of these mobs, your crew are locked into a little appropriately-terrained-for-the-region battlefield with the actual monsters of the enemy. From there, combat functions completely as it does in WC3. This means any one combat encounter is a totally fixed challenge, without the risk of additional random monsters joining in halfway through, but it’s also not fighting the engine with any kind of ill-fitting turn-based system.

If all the heroes die, you just wake back up at the starting town. However, infinite respawn is rather necessary due to the difficulty of the map…

It’s all right son, the minimap remains standard and nobody plays with the fog or the lighting to deliberately confuse you.

It’s also got a “full-screen” inventory, again done in a very sympathetic way to the source material (rather than those grid/icon-type systems everyone bangs on about these days). Your heroes are once more shunted to a special walled area, which contains a number of circles of power marking actions you can take — from getting a full health refill, to upgrading combat abilities and spells to swapping out party members. It’s simple, intuitive and above all feels totally natural in the engine; you just order a hero to move onto one of the circles and this triggers the relevant action. The actions are delightfully cued by little bits of decoration around them.

Then there’s crafting, again fairly simple but rather satisfying. After learning how to forge items via a side quest, all it takes is an unprocessed item and two different ingredients. Although there is an element of guesswork as to what ingredients go together, it’s fair enough to just buy a stack of unprocessed items and swap through your stack of ingredients until something pops out. The downside, however, is that ingredient drops are fairly tight-fisted — after seven-odd hours of playing (and not skimping on combat, as will be noted below), I never encountered two of the ingredient items at all.

I believe there are precisely enough spell and combat points in the map to max out your team, so if you want to win you have no choice but to turn completist.

The map does suffer in one particular way: in its difficulty, which often demands grinding (and I don’t mean bums-on-the-dancefloor grinding, because I’m totes up for that). Whether it be for crafting components, money or experience, you sometimes just need to float about the overworld for a while until you’ve bulked up. Which is, well, a bit tiresome.

I like to think I solved the problem (you may disagree) in This Wreckage by having the natural combat encounters en route to your objectives bring you up to an appropriate state of readiness (although to the point where the superior equipment afforded by side quests and hording health potions or accidental grinding meant the game could become a total pushover almost accidentally). When I got to a point in the scenario where a boss felt necessary, I built it around the state I found Henrik in at that moment and tried to balance it according to that. Rather than setting up a boss of arbitrary difficulty and requiring you to do your own preparation for it — I mean, if you need to do side quests to progress, doesn’t that stop them from being side quests?

Unload all of the spells! What do you mean, I’ve run out of mana and didn’t buy potions?

The Legend of Magnador is definitely one of the seminal singleplayer RPGs for Warcraft III that no fan of the genre should be without it. It’s a piece of craftwork we can all aspire to, it teases the engine but never fights it, its custom artwork is understated but present nonetheless; while it may be just a little bit too difficult in places, this is really worth battering through for a very fine piece of storytelling.

11 thoughts on “Blog 521: The SPRPG Diaries: The Legend of Magnador”