So, Tomb Raider was good but a bit shaky in places, while Tomb Raider 2 was beautiful but an exercise in masochism. Will Tomb Raider III: Adventures of Lara Croft get the balance right?

Well, it’s certainly another game of incremental upgrades. Lara’s got a small suite of new moves — she can finally duck and crawl, and there’s a meter-limited sprint ability (is this a herald of even tighter timing challenges? Yes, yes it is), plus the ability to hang from monkeybars. Graphically, not much has changed with the character models — Lara’s level of detail is the same as in TR2, though I think other characters have had a small boost along with weapons and pick-ups, which have finally transitioned from billboarded icons into fully 3D objects. Environments are still made of voxel chunks, but the cube texture resolution looks like it’s gone up a bit and there are a few more bits and pieces of decorative mesh disguising the edges of the blockular world.

All in all, it’s got a slew of fairly subtle but welcome fiddly bits, without belting into giant polycounts. I have to say, if I ever get to make a fantasy epic RPG — I want it to look something like this.

The level design is mostly better than Tomb Raider II, but it’s only got back to the level of the original rather than getting to somewhere good — there are still elements of plain old ass-pullery, like the frequent descents into darkness where flares don’t last long enough and are far too scarce, resulting in the need for atmosphere-ruining adjustments to the gamma to avoid endless headache-inducing squints as you search for tiny locks and buttons.

The rest of the time, it’s mostly about seeing where you want to be and then finding out the precise combination of jumps and ledge-grabs that’ll get you there — the same old recipe, delivered in that same crossword-clue level of abstraction that throws any concept of these being real places out of the window. 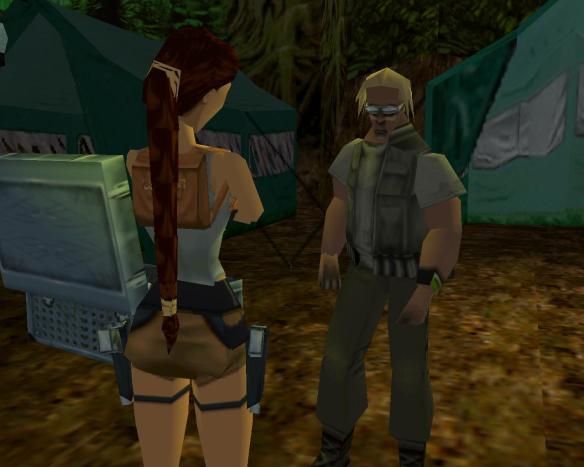 After the first sequence of missions in the jungle, you get to choose where to go next. I picked London because I’m a Brit, but in a dazzling display of Mass Effect there are two other planets to go to afterwards. What this means for balance and the level of puzzle obtusosity (is that a word?), I have no idea — is there an implicit order that I’ve bucked, or will they all be equally challenging in their own ways? (Or, perhaps worse, will they just be palette swaps with no escalation or different flavour at all?)

Of course, the London levels feel very Deus Ex and not particularly Tomb Raider — not just in their midnight timing and grimy street setting (plus the abandoned underground station of Aldwych), but also in the fact that there are some guards you can avoid while they patrol the rooftops (obviously I wasted loads of shotgun shells on killing them because I am a Total Bastard).

I even found a secret alternative route to the train station foyer, meaning I could safely dispatch a torch-wielding thug from on top of a ticket booth. It was not particularly well hidden behind a breakable wall, but it’s a nice touch. I did remark earlier that Tomb Raider may have benefitted from a little bit of non-linearity in its level design, so is this the beginning of something wonderful? (And, now that I’ve got a Deus Ex reference into this blog, I just need to find a point of comparison to Unreal Tournament and we can play Kilbirnie’s drinking game.)

Who needs the curvature of the horizon when you’ve got a limited triangle budget?

Of course, Aldwych had to ruin itself with yet another brutal timing challenge. Three time-limited doors, no margin of error, tight cornering and a pool of water that cannot be escaped from — why do you keep doing this?

It’s the same issue that so consistently destroyed the last game. Just when I think I’m getting into a rhythm, starting to find things and follow the right paths, it throws in an impenetrable maze of backtracking or a timing puzzle that is crippled by the controls.
I really want to like the game, but how can I when it so consistently cuts my legs off?

I wonder if this is the true reason for blinking objective markers in the modern age. The world can’t really be used to navigate; you never quite know whether a door is going to lead to the level’s exit or another sideline, and a good number of issues go right back to just not picking out a textural cue that a block is mobile, a ladder can be climbed or an object can be activated. Was the solution for the modern age really not to make levels more navigable, more sensible, but just to print an icon that says “you need to go here now”?

I can’t recommend it, though I really really want to. So much of the game — the fundamentals of acrobatic exploration, the themes of mystical artefacts and ancient tombs and forgotten technology, the graphics and the worlds — is perfect. But for every element that’s perfect, or approaching perfection, there are truckloads more that throw everything out the window. And that can be said for all three of these Tomb Raiders; things tweak and twiddle but somehow nobody ever thought to solve any of the real problems with the level design.

Which is a damn shame. I’ve still got the bulk of this game to go, but my interest is waning. I want to complete it, but at points I feel that it doesn’t want me to complete it.