I didn’t have too good a time with Tomb Raider: Angel of Darkness (can’t find my words; they are buried somewhere on the old Myspace blog), but GoG.com tweaked my impulse-buying circuits at the weekend — and so I splurged on Tomb Raiders 1, 2 and 3 (because $3.99 is such a splurge). I think I’ve been told that each one of them is the “best” by various sources, but the same thing happened with every single Simple Minds album except Reel to Real Cacophony (which is very clearly their finest) so people can’t really be trusted.

Anyway, let us start at the very beginning. The year is 1996…

The immediately obvious thing about Tomb Raider is the complete and utter lack of any kind of signposting. Even the tutorial level, in Lara’s mansion, doesn’t give you much in the way of direction; instead relying on the instinctive desire of the player to keep moving to cause them to stumble across the next trigger. The tutorial gives you a rough guide to the basics of acrobatic exploration, but the rest you’ll have to infer for yourself while you’re on the job.

Of course, the first few short-ish and fairly linear levels do little to prepare you for the monolithic underground sprawls you’ll soon be traversing. The little mountain cave in which you begin your adventure soon opens up into a mystical underground valley, complete with lush vegetation and dinosaurs. A valley replete with secret side-caves and hidden passages: but this is only the beginning. 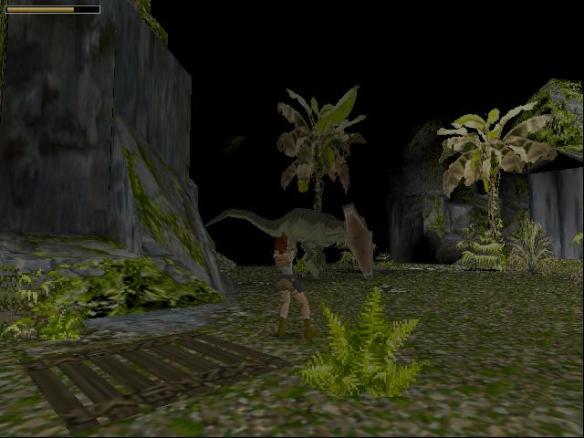 Thank goodness the starting pistols never run out of ammo.

See, I often found myself in a state of confusion between secret areas and the “main quest” path. The levels are designed around doors and keys — whether switches, artefacts or literal keys. You’ve got to find keys and switches and activate them all in various combinations in order to proceed onwards and downwards into the bowels of the ancient world to reach your goals. The problem is that it’s often harder to find the main path keys and locks than it is to find the secret areas that are full of bullets and medipacks — I just followed the paths that seemed most natural to me, only for them to continually turn out to be secrets, while the main path languished hidden in some altogether more obtuse way.

On the one hand, I love the fact that my intelligence is not insulted — there is zero hand-holding, no diary of objectives or flashing markers saying “follow the arrows”. It’s more, “here is a level: get through it” (and surely some RPG elements and a Deus Ex-style range of possible solutions would be the obvious evolution of the game). On the other hand, the tombs are devoid of humanity except the occasional villain, despite being… Well, the tombs of dead kings. I think it would have been nice to have readable books and inscriptions, Unreal-style, to give them a little bit more concrete character and, yes, maybe a couple of clues about where to go. Obviously badly-written inscriptions could have totally pasted the atmoshpere, but well-written inscriptions could have gone a long long way to enhance the setting. (The entire plot is also rather a lot bigger than the game’s exposition gives it credit for.) 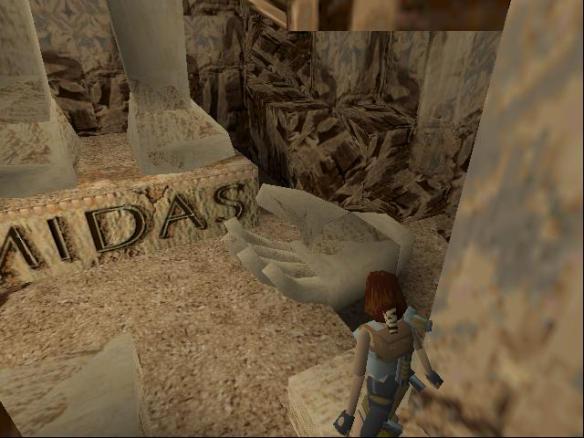 Midas, eh? I wonder what his puzzle involves. No, don’t tell me, I know some mythology.

The camera doesn’t necessarily help with navigations, though. It’s a third-person game (without mouselook), but since you’re always underground and spend a lot of time in tight corridors the camera can bounce about in a less-than-pleasant way. When the entrances that lead to the next stage of the main path are often concealed, it’s easy to swing the camera right past them and spend the next twenty minutes retracting your steps.

Then there’s the general lack of shading on the level geometry. Entrances are not only deliberately concealed, but if they have the same textures on their side walls as their surroundings it’s hard to even realise that there’s a cavity to aim for. The same goes for cracks in walls that you can climb along. You really need to take your time, using the look-around key to take stock of the room you’re in and potential avenues of progress. I did have to resort to a walkthrough a few times when I kept on missing some vital hidden pathways, but the puzzles themselves were just fine (I’m a grown-up now, I can handle it). 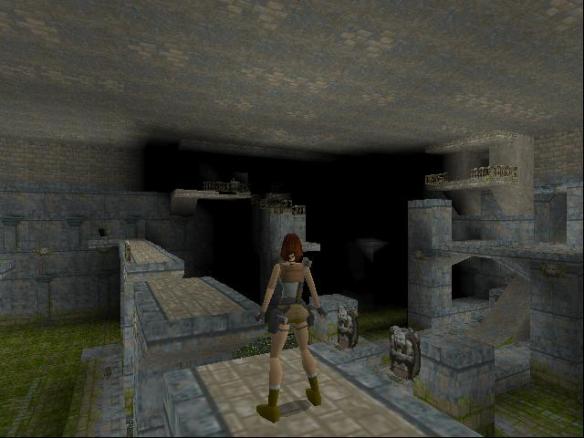 Breaking through your crazy maze, like a laser beam my eyes on you!

But the game is all about jumping and mantling and general acrobatics, so the third-person camera is an absolute necessity despite its occasional awkwardness — you need full awareness of Lara’s position, how far her arms can reach and precisely where her feet are to time jumps just right. Some of the time-limited jumping puzzles get in the way of the controls, though; for example, when doing a running jump Lara actually jumps on her second or third step. This is fine when you have a single jump to do, but when you’ve got to meld a series of running jumps it can get frustrating. 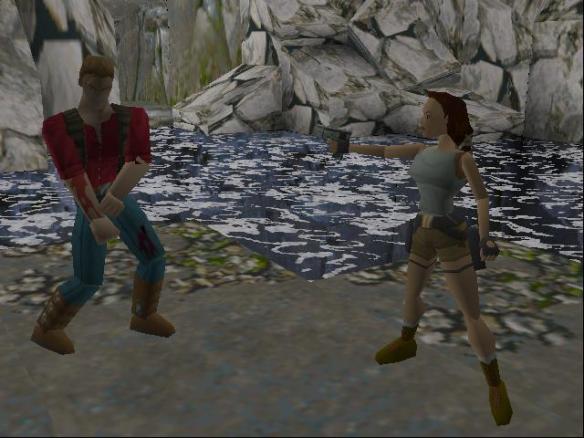 Luckily, the character animations are absolutely sublime — from backflipping, pushing mobile blocks to hauling herself over ledges, Lara’s movements are consistently detailed and make the incessant backtracking and retracing of steps almost worthwhile for the amount of jumping around you can do. (Amusing counterpoint: the animations in the pre-rendered cinematics are rather shonky in comparison.)

I also adore the graphics. Despite the limitations of the engine (and presumably the ancient hardware it was built for) we are still presented with huge monuments and giant chambers that disappear off into inky blackness. When you’re not stuck in a claustrophobic corridor, you’ll be overlooking an ancient structure you can’t see the other end of. The scale never disappoints. 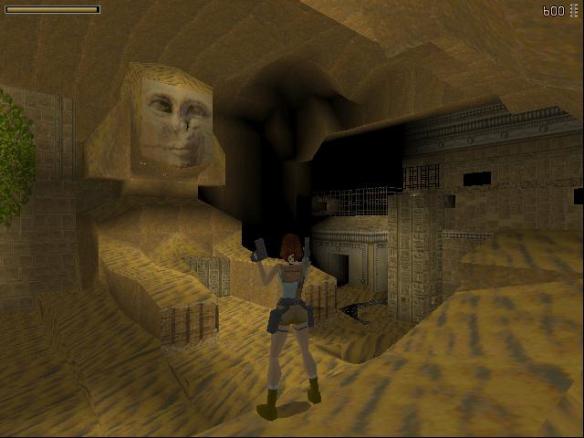 She sphinx she has all the answers…

A little bit on the hollow side but actually rather compelling. Stunning graphics and the finest animations make it a joy to explore, at least for the first lap around each level.

The only lack is that exploration doesn’t result in, say, more plot tidbits or anything more exciting than ammunition and health packs. While these things are welcome, the game worlds sprawl well enough that there’s plenty of room for extra layers of mystery to heighten the mood (and the desire to explore).

But mostly, I’m pleased! Can’t quite see how this game made Lara Croft a cultural phenomenon, because while it’s pretty good it’s definitely not great. It may contain the seeds of greatness, if it was perhaps crossed with something of a similar age that keeps coming to my mind: The Elder Scrolls: Daggerfall…

See? It scores highly on the I-want-to-mod-this-o-meter. 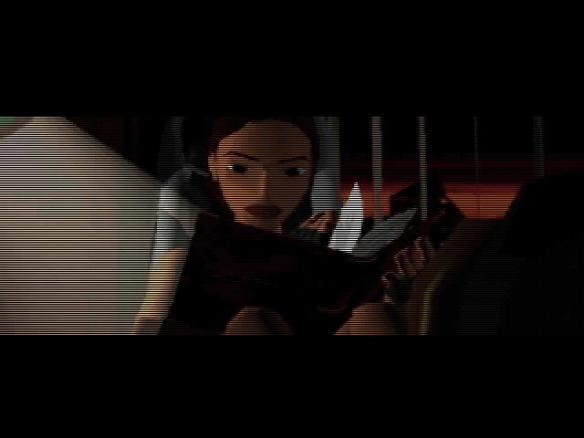 Even the pre-rendered cinematics are low-poly. Isn’t it glorious?