For my birthday, I got a new mouse and keyboard. Proper ones, I mean, not just another round of el cheapo accompaniments. For my gaming pleasure… You know, all those modern games I don’t enjoy play.

So since I’ve had some time to play a few games with them (Unreal Tournament, Crysis 2, Saints Row the Third, and currently in the middle of Unreal Tournament 3) I suppose it’s time to do a little reviewing…

Let’s start off with a quick examination of my, as they say in the business, “battlestation”.

I have rather a lot of Lego. Points for guessing what’s on the screen (application and object being worked on).

As you can see from the picture, there’s a lot of Lego on my desk. On the far left are Desert Viper and Thunder Racer. Nestled behind them and the back left speaker is a creature composed of the Exo-Force Dark Panther, standing guard over some old sketches and my collection of concert programmes. You completely can’t see him from this angle.

In the middle, we have the shattered remnants of Dino range models Raptor Chase and Tower Takedown, currently the focus of all my loading-screen fiddling. Along the base of the monitor we have my beautiful but all-too-small medieval collection: Outpost Attack, Blacksmith Attack, Prison Carriage Rescue, Venomari Shrine (one of the least spacey of the space-ninja range and so an acceptable bodge) and Knight’s Showdown. At the edge is another birthday gift, the mighty Black Phantom who is clearly a cleric of Bhaal with that mace and those horns.

On the right, we have the big guns — General Grievous’ Starfighter and leaving present Darth Maul’s Sith Infiltrator.

Arrayed amongst this magnificent aglutination of the world’s greatest toy, there is some computer hardware. On the shelf at the bottom are the subject of this blog, the gently LED-glow-lit mouse and keyboard. Positioned hilariously are 5.1 speakers from Logitech (the subwoofer is hidden on the tiny under-desk “printer shelf”), while in the middle is my modest 17″ Samsung monitor.

Squatting, brooding in the bottom right corner, in the scanner cabinet with the shelf removed because the actual computer cupboard just isn’t big enough, is my steed Daedalus. He’s a Dell XPS720 from just over four years ago, so he’s getting on a bit (and his 2.4GHz quad-core might be good for modern games, but some middle-aged games trip over being locked to an individual core that isn’t quite good enough). But then I realised that there aren’t many recent games that I want to play that I can’t run, so I’m hanging back on replacing him for now (want to see what the next console generation will be so I can safely exceed it).

Yes, it is called the “DeathAdder”. Suffused with LEDs the mouse glows a soft blue from the scrollwheel and a logo on its back (since this bit is always under my palm it seems a bit superfluous).

Something I rarely tend to notice until a sufficient contrast is presented is hardware build quality. I noticed it particularly on the mouse before this one, a disgraceful offering that accompanied Daedalus and broke all-too-quickly, but usually the mouse is good “enough” that I don’t care.

Then I get the DeathAdder. The plastic of the palm area is nicely grippy, the contours are form-fitted to perfection, the buttons click just so. But that’s only to be expected — this thing retails at around fifty quid. Ideally it’ll last a lifetime compared to the bog-standard mice I’ve been surfing across since I first started computing.

Beyond the form factor, there is actual usage — it glides across the mouse mat, perfectly sensitive but never feeling jittery. It doesn’t, however, like being on the faux-wood desk surface: the mat is essential (but the shelf on this desk is a bit small so I need the hard-backed mat to give me some extra over-spill space anyway).

Look, you can already see the worn bit beneath my grubby index finger.

Issues? The Razer “Configurator” takes a good 30-60 seconds to kick in at start up, during which time it is at default (maximum) sensitivity — which is far too high for me, my screen size and my resolution. The system also has the tendancy to totally lock up Windows when updating itself, to the point where the machine has to be hard reset by the power button. Usually works second time around, but it’s more than a little distressing when it does. 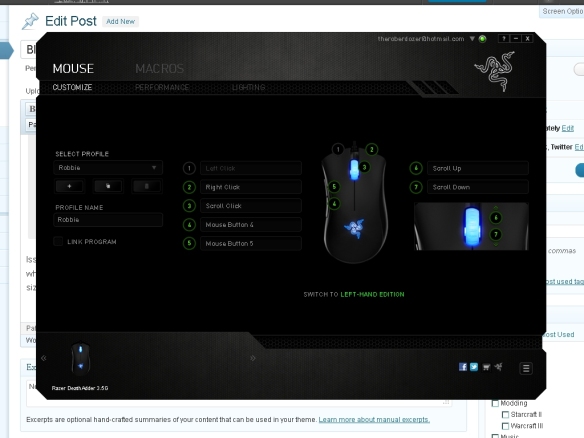 Why do these things always feel the need to have fancy interfaces to justify their existence? I want something lean, I’m not staring at the configurator all day.

More LED backlighting abounds, but since I don’t have enough fingers to cover every single key it actually comes in quite handy this time — if one is, say, playing a moody game of Deus Ex with the lights down, one can still couch one’s hands in the right places.

It’s got all the tricks but nothing too superfluous, all placed within a lovely futuristic slightly-angular design. My last keyboard had stupid hard-wired hotkeys for Outlook and other shitty things nobody uses — this one just has a Calculator button and six programmable hotkeys that I have yet to find a use for, plus the usual volume and play/pause media keys. The keys themselves are soft and not too clattery or wobbly, so no disturbing everyone else in the house when you’re up late.

A bonus feature is that the board has three programmable “modes”, swapped between by a key right in the top corner (that I keep hitting instead of Escape — the only barrier to entry is established muscle memory). Basically, these modes can control whether the Start button is enabled, what the hotkeys do, that kind of thing — so if you’re a bit of a clumsy button-masher you can stop the start menu from tearing apart all those games that break on being minimised. 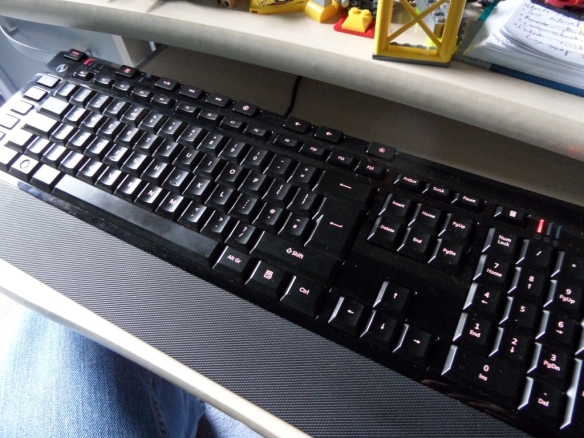 Issues? Software again — the Sidewinder’s manager sometimes doesn’t kick in at all until you hit one of the bonus keys (whereupon it takes another 20-30 seconds to fire the event). Games also seem to conflict with it sometimes: Saints Row: the Third refused to acknowledge the volume keys, for example. Might be fine for volume when you’ve got an external control anyway, but when there are six software-handled macro keys for your gaming pleasure I’d not be so happy to have them shut off by a spurious software-level hijacking.

THIS is how you do a software configuration utility. Windows theme integration seems to be *so* unfashionable.

For items so fundamental as mouse and keyboard, the input devices that control all activity, it doesn’t seem like much to expect some kind of optimisation and finesse in their software managers. Software aside, though, these are both very nice pieces of kit — and being things that my sweaty palms spend rather a lot of time wrapped around, the physical aspect is the most important of all.

Recommended? Well, I’ve got more money than sense but — when I consider just how much time I spend using the mouse and keyboard — it really is worth splashing out a little bit more to get something really nice.

The constant transition back to the shiters I have at the office highlights the difference all too well: you just can’t put a price on quality.