This week’s task was to overhaul Project Y4‘s node hacking maze minigame, turn it from a disparate collection of ideas and into a proper game.

Shall we see if I succeeded?

If you’ve followed the development of the maze game throughout its history, you might have noticed considerable see-sawing in its visual style. The first job I had to embark on this week was to finally settle on a visual style to run with.

I’ve settled for a generic procedurally-generated plasma texture as the main texture for all units, with unshaded glowing lines around important bevelled edges and for other minor features. I think it’s turned out rather nicely, definitely much better-looking than flat-shaded team-colour all over (which would only work if WC3 was sophisticated enough to have specularity).

Of course “better-looking” is relative (if the plasma could have been spheremapped it would be totally final boss). Let’s hope it lasts so I can move on instead of doing yet another art revamp. 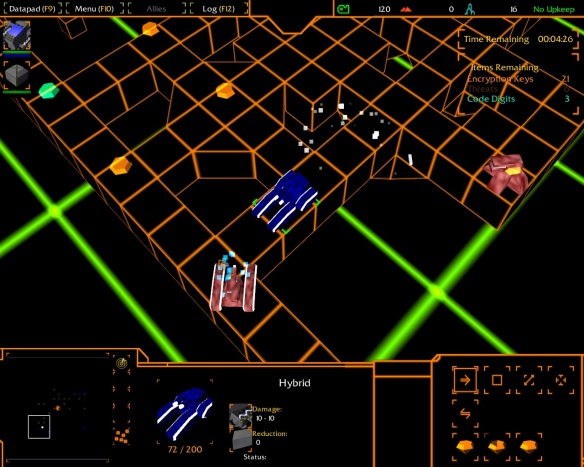 There are three avatars: Power, Speed and Hybrid. Each one has a special ability unique to it, and all three have the same two utility abilities.

And the two utilities are…

All in all, pretty basic stuff, but it should be enough to add some interest to the game.

The general idea is to cause different mazes to be generated with different characteristics — like smaller mazes with more enemies being weighted towards Power, large but sparsely-populated mazes for Speed, and so on. You will have access to all avatars from the beginning of the game.

Previously, the node hacking minigame had no obstacles beyond the actual geometry of the maze. No longer is this the case! I’ve whipped up a panoply of threats that will attempt to kill you, thus returning you to the Exit block and losing you precious time on the clock. As defined from the start, when the clock runs out you’ll be interrupted in the real world by a drone death squad.

Threats have team-colour overlays, so they’ll be randomly coloured. Colour has no bearing on any of the threat’s stats, it’s purely for visual enjoyment.

There’s room for more threats, of course. With the possibility of non-standard defensive software being installed on a couple of special computers, there might also be room for a few surprises… 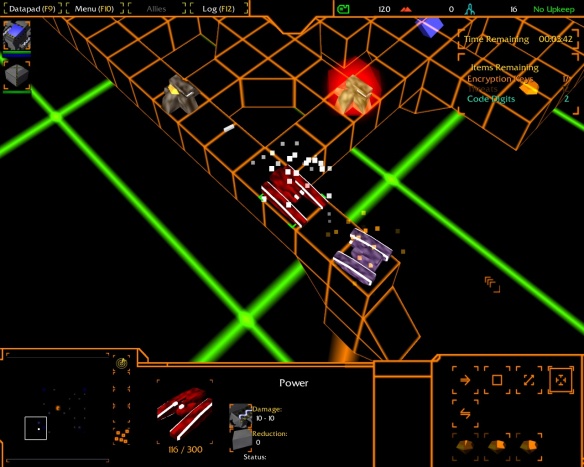 Disabling a threat with a breakpoint means you can walk right through it.

Of course there’s more to a maze game than just units.

I’ve added power-ups that will give you a random effect when you drive into them; currently, it selects randomly from a single effect of restoring your tank to full health.

Threat respawn might be an option too, at least in the later (bigger) hacks.

Sound might be a problem in the pseudo-real world of the rest of the game, but luckily in the node hacking game — with its stylised glowing lines and all that — is ripe for 8-bit sound effects. I’ve been using a little tool called “sfxr” to generate the appropriate blips and blops and cheesy noise-based explosions necessary. 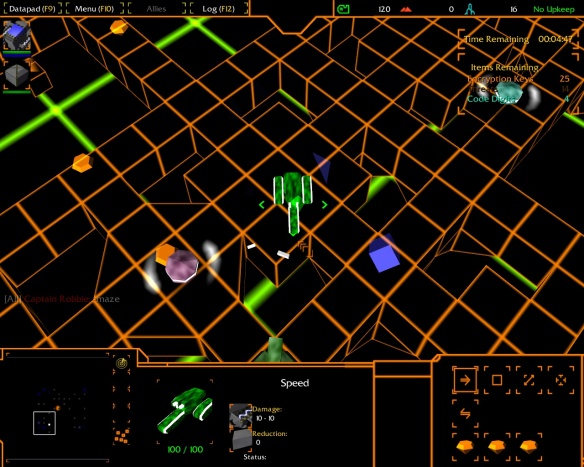 Pick up the spinning blue cubes for bonuses.

Of course I haven’t been sticking to just the maze hacking minigame (breaking the plan never ends well, but I am on holiday). I’ve been tidying up some other bits and pieces in the main game — from adding smoke and sparks to damaged units (I always thought those fires were hard-coded, but actually they’re just buffs that are pish to reconfigure) to rebuilding the Hill defence waves (for the third time) and fiddling with the AoS segment.

But the real question is… Have I done enough work to deserve Skyrim?