I have to say, the very first time I played Morrowind I bounced right off it. I didn’t pick “The Steed” as my star sign, so my walking pace was painfully glacial. Some other poor choices made me rubbish at combat so I got totally gimped by the earliest of wild animals. Oh yes, I was an Argonian, so I couldn’t wear all the sexy boots and full helmets (funny how breastplates will meld to the male or female form, but full helmets and boots can’t meld to the dinosaur form). So I conked out.

Some indeterminate amount of time later, the stars aligned and I decided to give Morrowind another go.

The rest, as the old adage goes, is history. 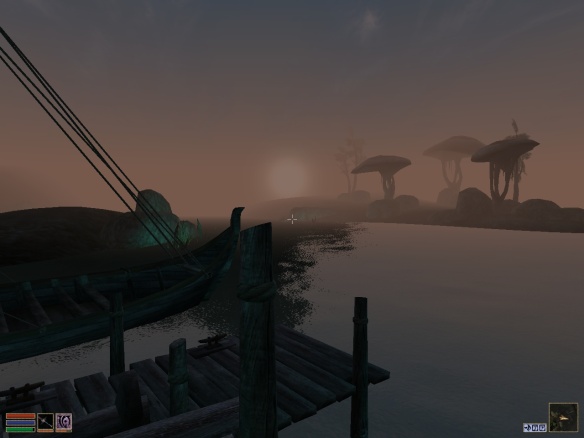 Morrowind's graphics might have dated badly in general, but it still has some of the most sumptuous water in any game I've ever played.

I hadn’t played Morrowind for years before I fired it up this time. As the main menu seguéd in, and that rousing theme soared into life while I sorted out the keyboard configuration, I must admit that I felt a little catch in my throat. This is Morrowind, one of my favourite games of all time.

I did wonder if my love of the game might not have been tainted by rose-tinted spectacles in such a long absence, but I am so glad to say that it hasn’t. I still love Morrowind, and trudging through its windswept valleys once again has only reinforced that love. 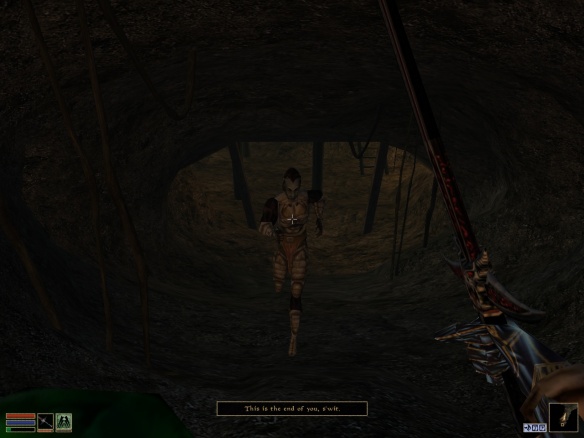 One blow from my mighty Daedric shortsword put this daft Dunmer on the floor.

Once you get past the potential for massive character skill choice gaffes that can break the game before it’s even started, Morrowind‘s actual introduction is far more inviting than those of Arena and Daggerfall. You might begin as a prisoner in Morrowind, but you’re getting released into a sleepy coastal village rather than a scary dungeon — your first encounters as you get to grips with the basics of moving around and interacting with the world are not mixed up with trying learn how to fend off vicious rats (having said that, for my first few tentative blows I kept trying to right-click-and-swipe to attack, so I really needed the space to acclimatise).

And once you are off that boat and wandering beyond the village, you realise the trees are mushrooms and the animals are pleasantly saurian (or insectoid, but either way, they all look like they fit in this dusty, volcanic land). While Arena and Daggerfall are mostly fairly standard fantasy stuff (though Daggerfall did start letting in Daedroths, Dreugh and other of the more out-there opponents), Morrowind blooms into brilliant strangeness. But it’s not obnoxious, or hipster; it just is. You walk out the door and the tree is a mushroom — so what? No deal is made nor fucks given. The game is comfortable with its own bizarreness.

This time, I set myself a single rule to adhere to, just for the sake of stopping the game from turning into a giant cheese-fest: no getting training for any major or minor skill. Of course, I’ve been training up all my miscellaneous skills (ones that don’t affect levelling), so that they can become usable and I can enjoy more of what the game has to offer. Hoovering up main skill boosts from reading books has been fair enough, though — you can’t play Morrowind without a bit of reading, natch. 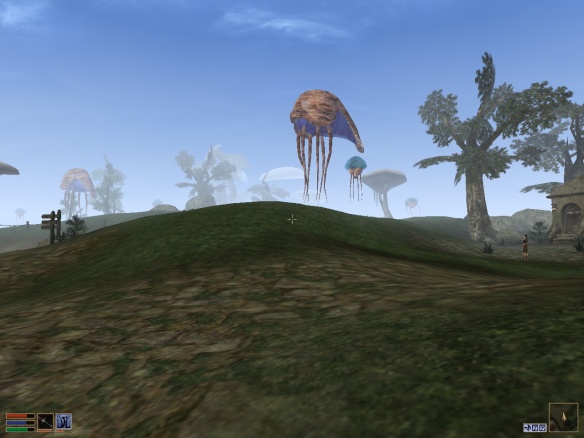 Because it's a big, stupid jellyfish.

Of course, my game hasn’t been entirely without cheesing so far; after doing the pilgrimage to the Shrine of Daring at Vivec and receiving its 24 hours of levitation (you can’t even sleep it off unless you track down an actual bed), I went for some fun in a nearby canton’s canalworks — raiding Sheogorath’s shrine. Turns out that if you hit enough people from mid air, even when you come back down to ground level they’ll continue to batter about like headless chickens.

Mind you, I should have been expecting the Dremora to pop up when I stole the gems off the altar. Luckily I had plenty of levitation time left to finish him off from the air…

And then I ate his heart. This play-through has been my hungriest character ever, as he’s been chowing down on anything from flower petals to scrap metal and diamonds. The rarer the ingredient, the better. Why make potions when you can eat raw?

Morrowind reserves the most dramatic battle music for the endless and titanic struggle between man and cliff racer.

This is going to be a controversial opinion, but I think Morrowind‘s lack of freeform fast travel is a good thing.

Without fast travel, you’ve got to be much savvier about how you get around. Yes, you can spend a lot of time just wandering, but with so much to discover along the way it’s always worth it, at least the first time. Beyond that, journeys need planning if you want to cheese them (no such thing as a free lunch) — take the Silt Strider to Balmora, then another to Ald’ruhn and then on to Khuul, then grab a boat to Dagon Fel… Or drop by a Mage’s Guild for another step. (The ancient Dunmer strongholds’ propylon indices continue to evade me, alas, or that’d be another set of jumpspots.)

The world just feels more real if you have to deal with it instead of skipping over the top (yes, I am aware this is a fairly masochistic school of thought after the twentieth Cliff Racer has descended from on high to mete out divine justice). I’d rather you raced over the land with the Boots of Speed than missed it entirely. 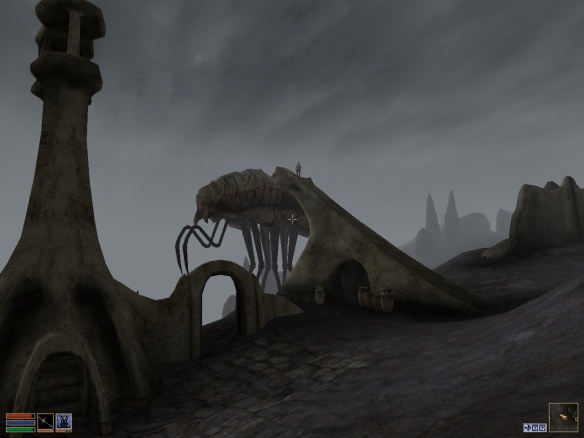 Why walk when you can ride?

The only real complaint I can level at Morrowind is that, as a completist, it offers far too much choice. Should I join the Imperial Legion now or save it for after I’ve finished the Fighter’s Guild? Should I become a retainer for House Hlaalu or Redoran (Telvanni are nasty dicks, and I’m no mage anyway)?

There are so many guilds to join, so many quest chains that send you up and down the island. The worst thing is that very few of them are mutually exclusive; the Tribunal Temple will quite happily let you also be a lay member of the Imperial Cult, and the Imperial Legion and Fighter’s Guild don’t mind you sharing out your ebony-clad Daedric-weapon-wielding beat-down time.

Okay, all quests wait for you and never get given to other guild members instead, but you wouldn’t know that unless you were meta-gaming.

There's always room for at least one floating island.

Morrowind is one of these games that you have to hit at the right angle to get into. Bad choices in the character generation screen can create a doomed world that can never recover, and the first time you play, without any foreknowledge, this is probably what will happen. It might even happen a few times.

But when you finally hit on the right combination, a whole beautiful world opens up for the taking. Vvardenfell is a crazily brilliant place to explore and just tool around in. Steeped in history and alive with local politics, it’s impossible not to get dragged in and lose all those precious evenings and weekends.

Join me one last time, children: