’cause Christmas time is the place to be, I always wake up in a puddle of wee!

Or computer games. Which would you rather hear about?

My brother gave me Revenge of the Titans and Trapped Dead on the day. Then I bought Warhammer 40,000: Fire Warrior for 99 pence.

Revenge of the Titans

Yeah. The popular genre of Warcraft 3 map (though I believe that, as with the AoS, this genre originated with Starcraft) where you just build static structures and let them have at the hordes of enemies who desire to reach some objective.

It felt somehow peculiar to be playing a Warcraft map… not in Warcraft. I remember when the first faltering stand-alone tower defences appeared as flash games, where they were almost straight-up clones of existing WC3 maps. “Ho ho ho, that’ll never catch on.” It seems we have come a long way since then.

It is most vexing when, later on, the bottom-tier turrets become totally useless. But generations of WC3 tower defences hardly worked that one out, so we can't complain.

The heartening thing about Revenge of the Titans is that it’s a so-called “indie game”, but exists in a physical box. That means they’re starting to pull out of download-only territory and into can-support-physical-boxes-too-either-way-is-good territory, that means they’re commercially viable for traditional high-street shops to stock alongside digital retailers, that means… I don’t know what it really means, I just like having real boxes (especially totally DRM-free ones). Hopefully it means the days of £40-for-a-mediocre-AAA-title are on the way out and some lower-graphics-but-actually-much-better games might get their oars in (and I don’t mean lol-difficult-retro-platformers, though I did see Super Meat Boy on the shelves last time I was in Game).

The other heartening thing is that it says “Includes free Steam key — does not require Steam”. Isn’t that wonderful? If you want Steam you can have it (and all the bells and whistles you presumably like), but if you don’t, you’re not forced into it. I like having a choice. Don’t you like choice? Kudos to the devs for this.

Cutesy faux-retro graphics and a short but delightfully electronic soundtrack make Revenge of the Titans a refreshing change from the every-building-in-the-game TD map from WC3.

The game is closer to its real-time strategy roots than other TDs I’ve played, in that you have to mine resources (by building refineries next to them) and enemies attack buildings as they proceed towards the home base. Since I’m rubbish at strategy, this usually resulted in a bit of a clusterfuck as I tried to balance defending the home base and defending the sources of wonga.

There is a technology tree as you advance through the game, which defines what towers you can build. Before each mission, you get to unlock one technology — the annoying thing being that most of the technologies are just meaningless nodules you have to go through to finally get the tower at the end of the tunnel. This makes for some slightly annoying missions where you don’t quite have the correct tower to deal with a new threat because it’s a tech or two away; but on the other hand, some missions are pish easy because you powered down the “wrong” tech line too early.

Luckily if you suck you can restart each mission with an easier version of the level, working down until you get no medal for winning and you feel like a right nob-end for waltzing through.

The grizzly commander's moustache vibrates as he talks in a gruff "blah blah blah" loop. This is amusing.

Trapped Dead seems to be of a similar ilk to Revenge of the Titans; a small team of developers rather than a giant corporate entity, and with its inventory-on-the-main-interface and top-down RTS viewpoint it could well have been prototyped as a WC3 map too.

Unfortunately, it seems nobody really bothered to play the game before releasing it (which is probably the horrible trap Project Y4 is gleefully charging towards). Clunky scrolling that often just siezes up entirely, unresponsive buttons and an awkward mouse control scheme make it somewhat tiresome to interact with.

The baseball bat is surprisingly effective, for the first weapon in the game.

Ostensibly a Baldur’s Gate-a-like (complete with pause-and-issue-orders) with a four-man party and none of that troublesome RPG stuff beyond a tiny character inventory, the formula should be perfect. The campaign has a mission choice format once you’re past the first couple; choose which people you’ve acquired to take with you and work your way through open levels to achieve some goal.

It should have worked, and with some serious control fixes, it probably would. But as it stands, the control scheme make it pretty much unplayable (at least to me, who is used to Unreal Tournament twitch-fests). 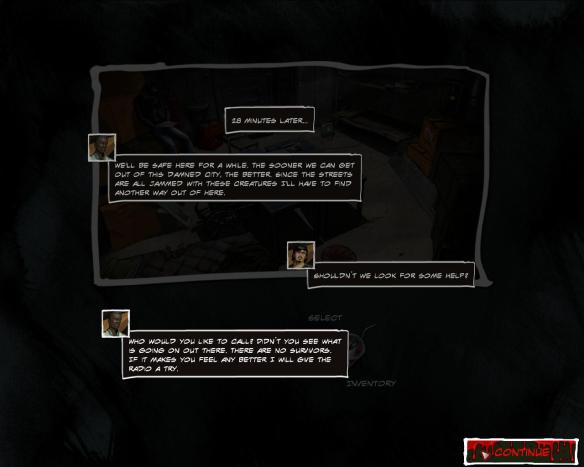 Fire Warrior is a peculiar FPS. Apparently from 2003, the game pretends to be more modern than the original Unreal Tournament with its slick minimalist interface, clear dialogue and more detailed level geometry, but constantly betrays low-quality in-game sound effects that could have been pulled right out of Quake 2. 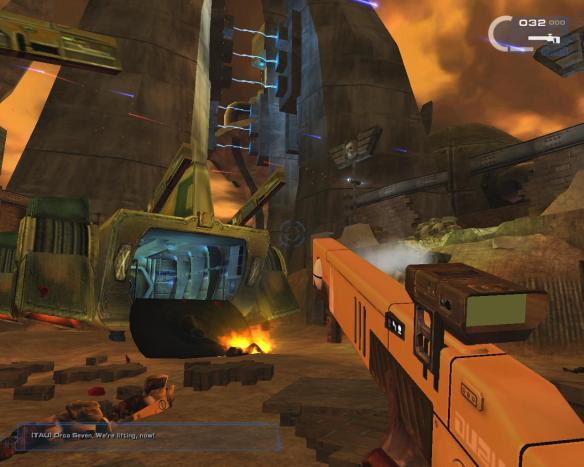 The intro warzone is full of explosions.

It does suffer a little bit from Quake 2‘s everything-is-a-machine-gun syndrome too, but since the mouselook has some awful acceleration on it (so it’s too heavy when you’re trying to be precise and far too light when you’re in the middle of a strafetastic firefight) spray-and-pray is about the only viable strategy. Then again, the propensity for machine guns may be due to constraints of the source material, so my lack of Warhamm knowledge means I have to let that slide.

Though the machine gunnery is exacerbated by the fact that you can only carry two weapons at a time. This would be bad enough if it wasn’t mandatory that one of those weapons was a Tau weapon — so while you may desire a sniper rifle for a little while, you might end up with no machine-gun backup as your pulse carbine has run out of ammo and you’re in the middle of an Imperium spaceship where there will be no refills for it.

Allies are in some sections fairly plentiful, so you can just sit back and let them soak up the bullets.

In its defence, it does have an all-star voice cast. Tom Baker does a load of narration at the beginning and then is never heard from again, Brian Blessed is an admiral, Sean Pertwee (I never knew the name but I knew the voice — he’s been in loads of crime drama and apparently narrated Masterchef in 2011) is a villainous governor and Peter Serafinowicz is a huge space marine. Not that there’s too much story to get bogged down in, mind you, but Brian Blessed does do some pretty good ham for the few lines he gets (then again, you’d be disappointed if you hired Brian Blessed and didn’t get a whole truckload of ham).

The Moral of the Story

Revenge of the Titans is pretty much Space Invaders for the modern age, but its intuitive RTS setup makes it so easy to become addicted to; whereas while Trapped Dead should have scratched the ever-burning Infinity Engine itch, it managed to lose everything to clunky controls, and Fire Warrior followed it (though not as badly) with its wonky mouselook.

Anyway, hope y’all had a proper crimbo and Santos gave you plenty of coal.