And so we come to the end of the long line of Unreal.

UT3, I have to say, didn’t grab me at the beginning. I felt something was missing; perhaps the shift in graphical style was too far removed from anything that came before, perhaps the story mode didn’t really satisfy the need for Unreal III nor the desire for a tournament ladder with more bells and whistles. Either way, after pre-ordering a tin box, it felt like a bit of a let-down.

Having said that, it was a combination of UT3 and Supreme Commander (well, and poor internal architecture funnelling all the heat from one of the hottest processors of the age down onto the stressed cards and not out the back) that did for my last computer’s graphics card (and thereby precipitated Daedalus), so I still played it quite a bit at the beginning (even if I wasn’t totally sold).

UT3 took some time to grow on me. Quite a while after release, after I had pretty much given it up for dead, Epic launched the Titan Pack — a gigabyte patch and expansion pack that twiddled with the core gameplay, added a few new maps (though didn’t extend or attach these to story mode, where some Necrified versions were missing from the original release) and skirmish game types… And achievements. 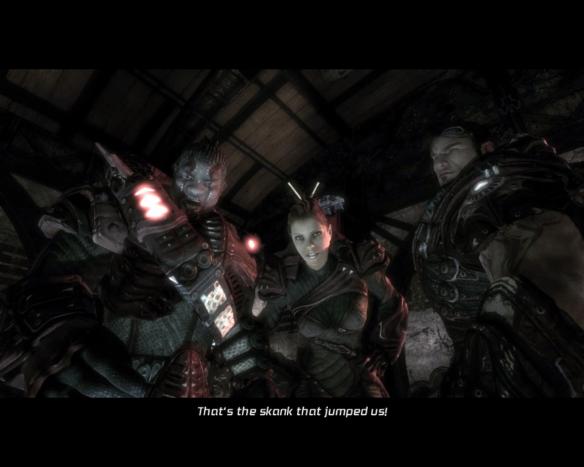 This is why I started using the word "skank" recently. Well, when I say "recently"...

It was the achievements that started the ball rolling.

Yes, achievements are often annoying fluff that break immersion — but in UT, a franchise that out of any franchise in existence should have been the one to have achievements a long time ago, they made me start to experience the game in a different way. As I strove for the find-every-power-up-in-every-map, I started playing maps I didn’t favour. As I strove for all the kills with different weapons I started to use weapons I didn’t favour. My own completist tendancies forced me to deviate from the well-worn furrows and find exciting new paths.

The campaign dialogue is ham.as.fuck, but excellent fun.

Initially, yes, it is visually jarring; over-detailed and annoyingly gritty. But the actual game pulls right back from the sluggish movements of UT2004 (though it doesn’t bring the dizzying heights of UT), which helps to make the large levels feel a lot more accessible, and the weapons feel like they’ve got a lot more punch in them again.

While the map layouts have tightened up a bit from the middle-aged spread of 2004, the map environments are absolutely gobsmacking gargantuan, with collossal swathes of non-level geometry stretching off into the distance. Thus we end up with a balance of UT2004‘s airy open spaces with the tighter layouts that made UT such a blast.

And the soundscape is full of throaty roars again. Perhaps a little too heavy on the bass, but certainly more deliciously cacophonous than the muted thumps of its predecessor — it sounds like you’re having an actual battle this time.

Something new that I really like is the rejigged armour setup. There are four pieces — the classic thighpads, vest and shieldbelt, plus newcomer the helmet. However, unlike in the original UT where you got to the max 150 armour by vest-and-thighpads or the shield alone, in UT3 all the pieces have their place to a maximum of 200. The only thing the game is missing in this regard is that the parts don’t all appear on the character model. But then again, I seem to have an obsession with pretty-pretty-dress-up games so here’s hoping UT4 has more clothing options.

Although the game does overdo it on the bloom.

What’s it missing? Well, Bombing Run was a pretty baller game type but has been surreptitiously dropped. I’m not sure why, since the story-mode justification for Capture the Flag would hardly have worked any less with people fighting over a mobile objective.

Assault mode is perhaps a more obvious casualty, considering the story-driven campaign would have been perfect for single attack or defence rounds of critical locations. Okay, there are Warfare missions — but Warfare isn’t Assault with a few Onslaught parts (or the grand pseudo-RTS the original hype painted), it’s just Onslaught with a gimmick in each map. I’m not sure that perfectly mirrored scenarios particularly accentuate a story based around invasions and counter-invasions, either.

Map gimmicks are out in full force across all the game types, mind you, and they are of varying quality. The ever-frustrating CTF map Kargo with the Goliath tank in the harbour gets especially annoying after a while, and the story mode puts you through it at least three times. Then there’s the final Onslaught level before the boss, Floodgate, which allows you to backdoor the enemy core by tussling over a central control point instead of being any good at the actual game — a bit of a damn squib of a penultimate level.

Malcolm is still a giant fuckface, but he does get some good lines.

So there we go. The Ultimate Unreal Binge is over. More than ten years of game development, compressed into nary a few weeks of play time (and most of that was squeezed around having a job).

I suppose with something like the UT franchise you might be tempted to say “the same with better graphics” as you go along, but playing them side by side really highlights how totally different they really are. Each is an independent beast with its own strengths and weaknesses, which is probably a good testament to why people still mod and play all of them (well, perhaps less so UT3 because you can just grab the UDK and go standalone instead, and it’s basically impossible to host a game due to netcode fuckery).

I think the ending of UT3 is actually a very shrewd move in terms of leaving the door open for a sequel. Not in the sense that it does (because it does that very ham-fistedly), but it leaves the door open for a continuation in the same story-driven style of UT3, if the format experiment is deemed to have been a success (chasing Malcolm around his portable respawners) — or it could go back to the tournament ladder style (chasing Malcolm up the tournament ladder so you can humiliate him). Either option would be agreeable to me. 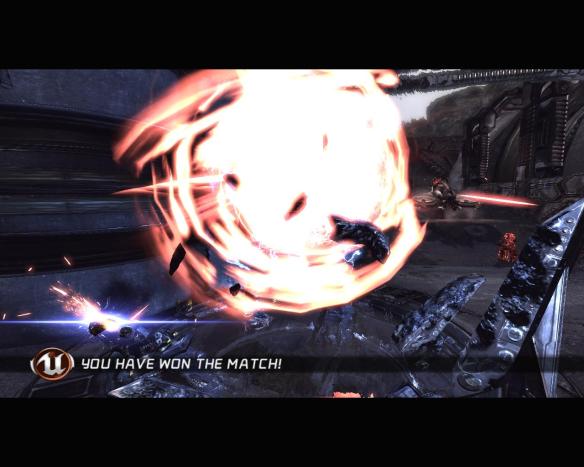