Unreal II is perhaps one of the most horrendously underrated games I’ve ever played. It’s another game with a special place in my heart. Aye, one of those.

Unreal II is, however, a very dramatic departure from all that came before; so much so that you might be forgiven for thinking it isn’t an Unreal game at all. While UT2k3 and 4 kept the faith, U2 discarded most of the recognisable features that made Unreal… Well, Unreal. 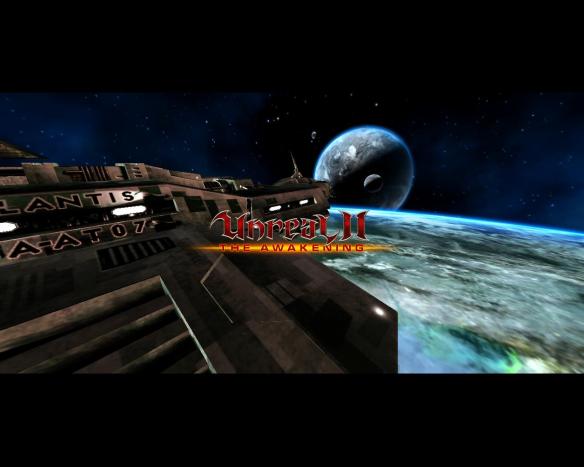 Pretty skyboxes remain and proper cinematics are out in full force.

Where to begin? Unreal II was developed by Legend, the same people who made the Return to Na Pali mission pack for the first game. Rather than the wild weapon set of the original game and Unreal Tournament, U2 has a boringly military weapon set extrapolated more from the boringly military additions dropped in by the mission pack. Well, plus a couple fun sops like the flamethrower and spidergun.

The only returning weapon is the Dispersion Pistol, which (natch) looks nothing like its progenitor (not that I’m defending the original design, but consistency is consistency). Instead, we have the Combat Assault Rifle, the Grenade Launcher, the Shotgun (and not even quad-barrelled), the Rocket Launcher (and that doesn’t have six barrels, though it does have a funny alt fire)… 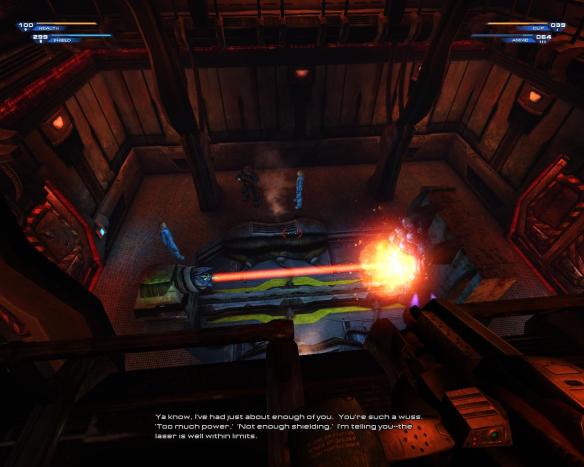 Touring the Izanagi research base on Na Koja Abad is full of amusing eavesdropped conversations.

Coming straight out of Unreal Tournament, U2‘s movement speed is also noticeably gimped. This is jarring when you realise that you can still jump pretty far (and fast) — but can’t run to match it. Doing a running jump is particularly strange when, from a slow waddle, you propel yourself over a massive distance.

Anyway, it’s immediately obvious that Unreal II, as a raw first-person shooter, isn’t quite as perfect as its parentage should suggest. So why does it get that special place in my heart?

Unreal II might discard a lot, but it does its best to maintain the fantastical scale of the Unreal universe, if not the mad scope of UT (as it falls towards little itty-bitty levels). You might get a gentle introduction to a lush jungle planet, but soon you’re running down the breathing tubes of a planet-sized organism and invading an ancient robotic stronghold on your search for the artefacts. 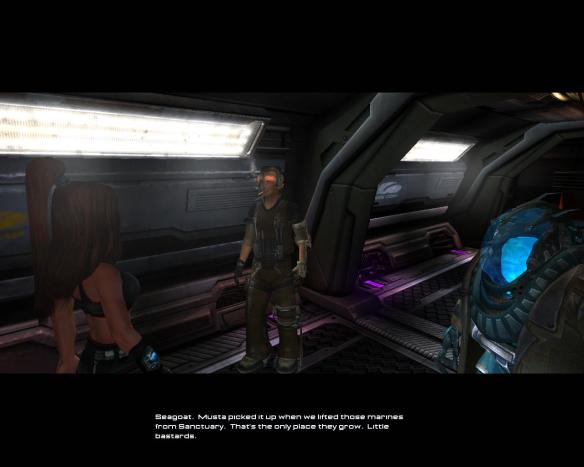 It's Seagoat time once again.

Unreal II has a story. There are no translator messages, though — it’s an actual story, the story of a band of military reject misfits on a tin can, marginalised by the authorities they serve, saving the universe from itself. I really really love the writing in the game; the character dialogue, the inter-team banter, is absolutely top class.

This is both the game’s saviour and its failure. I love the characters of Unreal II, but I don’t think the game gives enough time for them to actually deserve that love. I think the game needed another couple of missions, to provide context for more interludes, for us to get to know them even better — several plot points almost (almost) come completely out of nowhere, and a few more interludes to let them build up properly would certainly have helped.

Even away from the character side, the plot sometimes stutters. When the Atlantis has to set down for repairs, for example, you get assaulted by Liandri mercenaries — but why? Nowhere in the game do you actually antagonise Liandri; you spend all your time up in Izanagi’s junk, so surely they would be the ones hell-bent on taking you out of action?

The opposing corporations are also totally faceless. They never issue an ultimatum or talk to you; although the team talk is brilliant, they communicate with virtually nobody outside the ship. 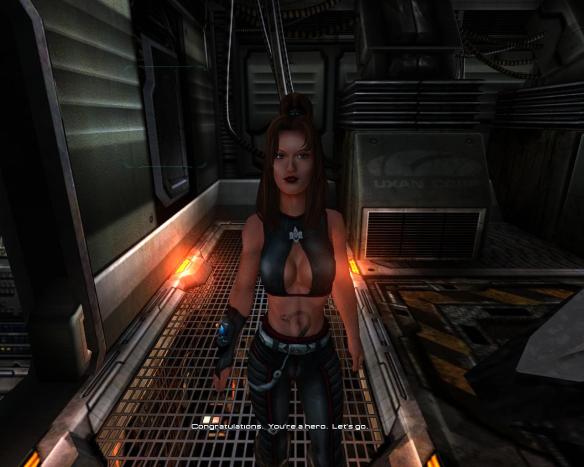 In space, nobody can see you not wearing very much.

I can poke a million holes in Unreal II. I can think of a hundred ways it could have been tighter, stronger, more refined. But that’s the way it goes when you love something — you become even more critical as any little slip becomes immeasurably more noticeable.

Despite all its flaws Unreal II is a brilliant game and I really cannot recommend it enough.

I wish Epic would pull their bloody fingers out and make Unreal III. If they can’t be bothered writing it, I’m willing to take up the slack. 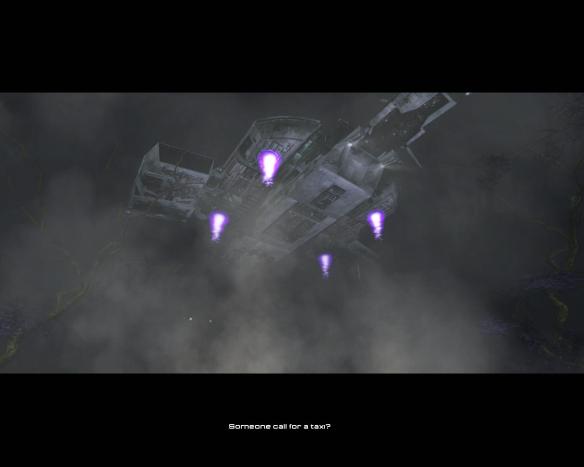