Yes, it’s that time of year again, when RDZ’s parents leave him to fend for himself — and he responds by wheeling out the terrible films.

This year has had a packed schedule. Star Trek (2009), Love and a Bullet, Flash Gordon, Colombiana and Ironclad.

While Love and a Bullet was the main event (for reasons we shall discuss in a moment), Jack knew I hadn’t seen Star Trek and brought it in case a particular scene in Love and a Bullet might be offensive to some audience members who didn’t even turn up.

But we watched it anyway while we warmed up.

My gut reaction to this film should be the usual “time travel is not a plot device”, but the way they handle it, it isn’t really time travel — so there are no paradoxes and annoying things to get in the way. Giant space-ships ensue, and though I’m sure black holes don’t work like that, I’ve never been into one to find out.

Otherwise… A J. J. Abrams film that doesn’t feature a hidden mysterious monster that is only revealed in the last five minutes? Gosh.

So, Love and a Bullet.

This hails from our trip to Boston for PAX East a while back. During our first day, we were all a little out-of-synch with the local timezone. In order to speed our adaptation, Kilbirnie and I stayed up until a reasonable local hour before going to sleep, so by the next morning we were awake at a reasonable hour. Adaptation complete!

Jack and DS, in the other room, went to bed early. And woke up early. While we remained in bed (like the correctly-aligned people we were), they were watching television… And ended up on this film.

Jack loved it so much he bought it, and after months of build-up, we finally watched it.

It’s a comedy-tinged action film about a hitman who does stuff and has psychological drama. The term “motherfucker” is used more times in the first twenty minutes than I’ve used it in my entire life (and I’m no stranger to dirty words). Rap star Treach gets his penis out in one scene (then again, there is an earlier scene with naked breasts so it’s only fair). There is a romance sub-plot and everyone lives happily ever after (or is dead).

A perfect Saturday night film, then?

I had seen this film before, but I remembered precisely one scene from the last five minutes — Emperor Ming being impaled on a rocket’s nose-cone-spike. Like Highlander before it, I felt this was one film that I just needed to see, regardless of rumours to its crapness/brilliance.

And what a bizarre film it is! I’ve never seen so much shiny gold armour in my life before. It seems that, instead of having physically different aliens, they decided to differentiate species by their fashion sense (apart from a few).

And Timothy Dalton with a funny moustache.

I moustache you a question, but I'm shaving it for later... Oh wait, that was Sean Connery.

You’re right, this computer game prequel isn’t a film so I can’t talk about it here. But, in the style of all modern games, it’s reasonably… cinematic.

Colin, the master of blagging free stuff, blagged this… for free. It was all very cloak and dagger — take a home-printed pass to an attendant, and they direct you to a screen that only lists Conan the Barbarian at 9 o’clock. But in reality, it was a secretive free pre-release screening of Colombiana, so that we can all go back to our cosy bedrooms and blog about it, thus building the publicity wagon. So I wouldn’t want to disappoint them, would I?

Another film about a hit-man (except it’s a woman), it’s an action thriller written by Luc Besson, who’s got quite the roster behind him. Unfortunately, this won’t be a highlight of his career — it’s a pretty generic revenge story, where the lead girl assassin is acrobatic and (like Human Revolution‘s Adam Jensen) spends most of her time in air ducts. She also had a little pet birdy, but we got precisely four seconds of it.

I mostly loved how any explosion shot was repeated five times from several different angles. 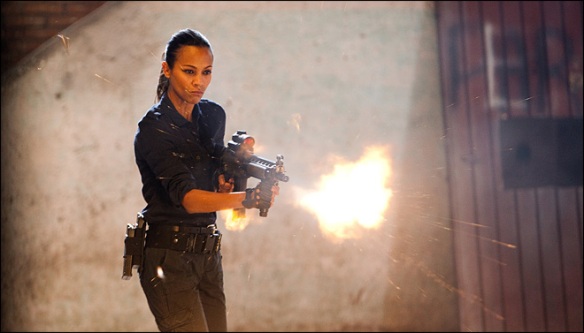 The internets refused to provide a screenshot involving air ducts. Trust me, there is a lot of air duct action in this film.

The token DVD purchase, Ironclad was one of three historical action films with the word “iron” in the title and won out by virtue of having the most recognisable names in it. Being from the makers of 300, starring Derek Jacobi (of Cadfael… Do you remember Cadfael? Fuck’s sake, he’s been in loads of other stuff too, but that’s my earliest memory) and listing Paul Giamatti as being from Shoot ‘Em Up (a delightful action film that defies description) only served to further push it over the top of the competition.

And before you say it, no, I couldn’t have all three — I only had £20 on me and already had Big Country’s The Crossing taking up £10 of that. Well, I could have used the credit card, but let’s not get carried away. I spent most of the week playing Human Revolution anyway.

Sorry, I’m going to have to level with you — I wasn’t in an entirely fit state of mind while watching this film to pass any kind of judgement on it. If you want a review, ask Jack.

We're pretty sure it wasn't Frodo, but the guy on the left still looks a bit like him. Right down to the floppy hair.