After completing Mass Effect at the end of last week, I decided to buy all the bonus mission downloadable content packs for Mass Effect 2 before continuing my Shepard’s journey.

Short and sweet, Kasumi’s loyalty mission is nary an hour long. It also, sadly, doesn’t turn ME2 into a third-person sneaker of the Thief ilk, but it does deliver the usual raft of amusement as you schmooze around a party full of criminals to track down all the ingredients you need to break into a giant criminal loot-centre. Raiding the master crim’s bedroom had some particularly fine moments of dialogue wit.

Once you’ve acquired the loot, though, the mission boils back down to combat with just you and Kasumi traversing the collossal arms dump this crim has under his pile.

Yes, I did wonder where that had gone.

After the mission is over, Kasumi herself is sadly a cardboard cut-out like Zaeed: her room is full of objects that prompt stories, but it’s all one-way dialogue more reminiscent of a Zelda game than a (supposedly) long and deep RPG. However, she does have a bookcase full of romance novels, so I can’t hate her. The port observatory also has a bar in it, though it would be nice if there was an integrated take-Kelly-for-a-drink or something rather than just sit-at-the-bar-alone-and-get-trashed. Poor Shepard.

Kasumi is also pretty handy in a fight. Her Shadow Strike (trololo) ability makes her go invisible, sneak up to somebody and punch them in the face, then go invisible and come back to you. If it doesn’t kill them outright, it still tends to push enemies out of cover and generally throw everything up in the air — making bad guys easier prey for my elephant gun sniper rifle.

Tip for all you wannabe thieves out there: stare right into the camera and make sure they get a really good look at you *before* you hack it.

Overlord is pretty crazy. As if the first sub-mission requiring you to destroy a huge satellite dish wasn’t enough, the next parts are Hammerhead driving segments in one of the most stunning gaming landscapes I’ve been treated to in a long time.

The X's mark the three tri-hull welds. Crack those up, reverse the bilge pumps, and the dish will split open like a banana.

Tearing through a verdant mountain area that wouldn’t be out of place in an HD remake of Unreal (now there’s an idea), you reach an old-school platforming geothermal plant complete with vents that jump you high and sinking rock rafts drifting down a lava flow. Once you’re through that, you get to traverse an eerie crashed Geth ship (on foot). Then the main research base is fairly generic by comparison, until Shepard gets… I won’t spoil. Plenty of excellent environment work across the board.

It can hover over water, but needs rafts to get over lava? Hmm.

The villain of the piece sounds like a dial-up modem on steroids on a rage-fueled rampage (which is… kind of what it is…). Which may tickle my particularly brand of experimental-synth-vocoder-Quake II leanings, but may not be for every0ne. Just… don’t put your volume up full.

I think, with a bit more Shepard/team interaction and more survivors to talk to, Overlord‘s plot would actually make for a fairly solid Hollywood blockbuster. Basic science/ethics moral-of-the-story, dramatic action, robot enemies so no blood worry about… 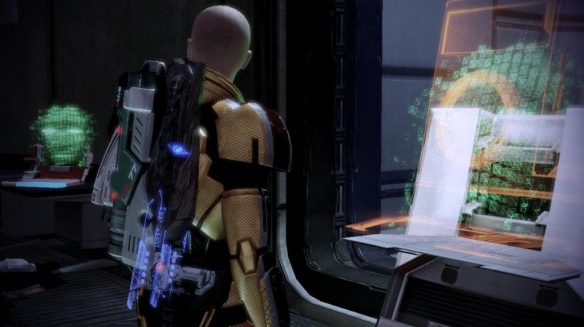 The eerie Face o' Doom follows you through all the facilities.

Yeah, sure. You get wildly different packages for your 560 BioWare points apiece, though — Stolen Memory is short but dialogue-heavy, not to mention with all Kasumi’s integration into the rest of the game as a character, while Overlord is a more traditional stand-alone action scenario with plenty of combat (both vehicular and otherwise) and puzzling.

Next time, I will descend into The Lair of the Shadow Broker, and confirm that Admiral Hackett is not actually an AI after all in Arrival.

Don't blink when I'm taking pictures, Shep, you look like you're stoned.