A couple of weeks ago, the sun was shining (oh my, such a rare occurrence).

This took me back to the Warcraft III OrcX campaign. Or, as it’s more commonly known (most people don’t know things by their internal labels, it’s true), The Founding of Durotar. The Rexxar campaign. This is the only one of the campaigns that I actually enjoy, because, well, it’s not a shitty RTS campaign. Have I told you that WC3 is a terrible RTS? Surely.

When The Frozen Throne came out, it came with only part one of this three-part campaign. We played it and loved it, a deliciously large slice of action-adventure, and then we languished in development hell waiting for the next two episodes to come.

Unlike almost every episodic game since, they actually did come.

This is what Warcraft III wanted to be all along, before some dirty pro-gamers came and shat acid rain all over its parade and turned it into a turd of an RTS. Warcraft III never wanted to be a straight RTS — just look at the glorious Alpha screenshots at Scrolls of Lore. Even if that’s RTS, it certainly isn’t the generic shitpile with heroes that came out the other end.

It's always satisfying to clean house at the Beast Den.

Considering the power of the editor and the effort that must have gone into making such a versatile engine, concentrating on  melee maps and the game as a bog-standard RTS is a bit like taking a great steaming dump in Blizzard’s bathtub (not that they don’t deserve it for other reasons, mind you).

But OrcX dispenses with all the crud. It’s a collossal top-down open-world exploration hack ‘n’ slash dungeon-crawler. Just you and your crack-squad of heroes against the universe.

Okay, plot-wise it’s never going to be Baldur’s Gate, but for a sunny Sunday afternoon with an ice-cold orange juice in hand (yes, my overriding instinct was not to go outside, but to slam on A-ha’s Minor Earth | Major Sky and replay OrcX… inside… out of the sun)… It hits the spot perfectly. 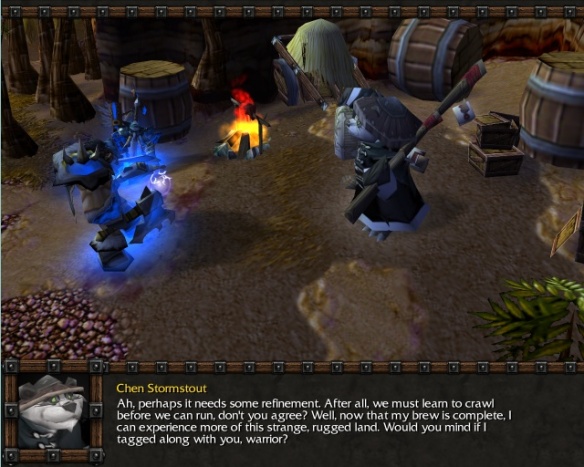 "Tagging along", eh? So that's what you kids call it these days...

Above all, it is exceptionally highly polished. Then again, that’s no more than you expect from things made by actual professionals. Who get paid.

Cinematics are all skippable and don’t break the game, respawning enemies only respawn when you’re not looking (yes, yes, I went for the cheap option and made them teleport in regardless of your position, but I’m a dirty amateur), each chapter spans several different maps with complete consistency… 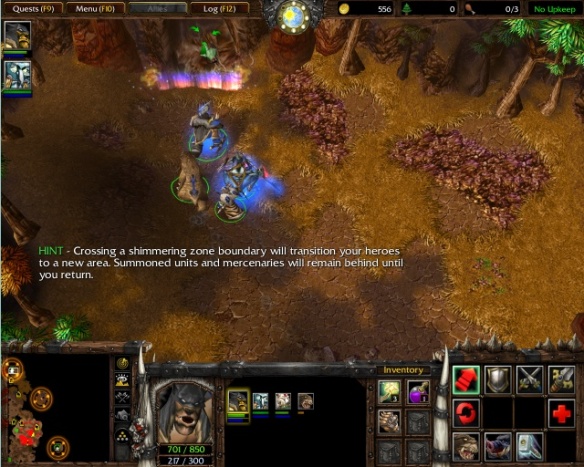 It's hard to believe that Blizzard locked down all the transition triggers for "Blizzard signed maps" until a patch well beyond the release of all three missions.

This campaign is completely solid — it really sets the baseline for singleplayer RPGs in WC3.

But just the baseline, mind you. It’s not perfect.

The one, massive, overriding flaw is that it’s about Orcs and not Jaina’s buttox. There is, obviously, no romance sub-plot because female orcs apparently just don’t even (at least, not until WoW, and we really don’t want to open that can of Storm Wyrms). 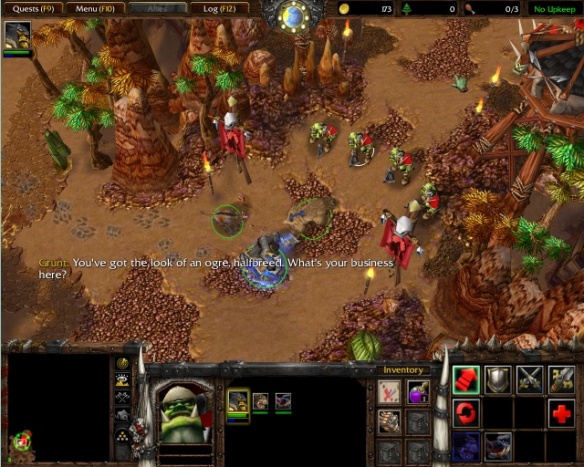 Are you talking to me or the pig-thing?

I think that Rexxar has a rubbish suite of abilities. Two cruddy summons and Storm Bolt — and they didn’t even replace the hammer artwork with a matching Rexxar axe. Storm Bolt is useful because it deals actual damage, and isn’t just a cruddy summon. Did I mention the summons are cruddy? At least Stampede is good against buildings.

At the beginning of the game, it’s just attack-move to success rather than button-mashing because of these poor ability choices. You can only click a summon once or twice per fight, whereas Storm Bolt… Well, it’s even more fun when you surf the level curve and can one-hit some of the enemies.

For all his apparent hatred of Quillboars, Rexxar is eager to summon their long lost cousin.

Alas, ranged support Rokhan isn’t much better. Healing Wave is pretty useless — whatever happened to Holy Light? Single target, yes, but when the shit is flying it can actually save somebody instead of just pissing into the wind. Serpent Ward is pretty useless too, providing little more than a distraction to absorb one hit from somebody. And Hex… Well, at least Hex can take an enemy out of the fight for a while.

It’s not until chapter two when Cairne Bloodhoof comes in with his REAL abilities that things get proper: Shockwave and War Stomp all up in this bitch. You should really have these easy beat-down abilities at the start of the game, saving the finicky ones for later — not the other way around. 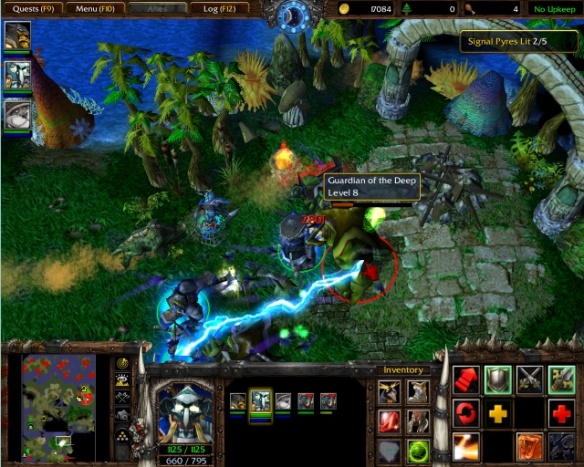 Okay, Stampede is pretty handy against giant bosses too.

The other problem is that, when you’re focusing solely on a few characters instead of, say, an entire army, you would prefer a little bit more complexity to occupy your mind. The basic RTS level of hero control and options doesn’t quite fill this spot; maybe if Rexxar could equip different weapons in each hand… Or if Chen was Jaina but she had awesome abilities instead of Mass motherfucking Teleport…

Hell, if it was just a third-person direct-control…

Did I mention it’s about Orcs?

Actually, there’s one thing worse than all of that — you cannot lose. Infinite respawn, kids! 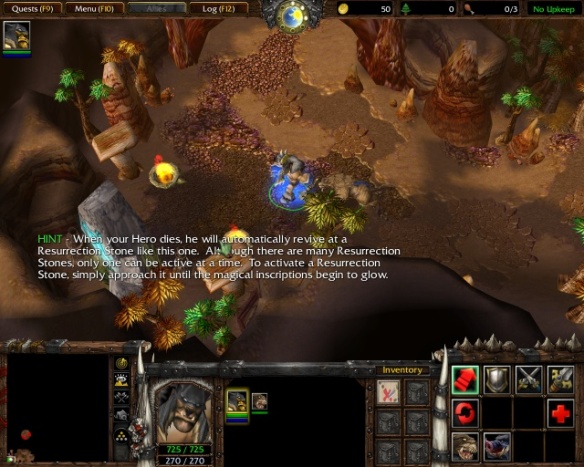 The bear also lasts forever, it just costs you mana now and then.

There’s also a bit of disparity between the chapters. Chapter one is all full of side quests and semi-relevant things; while chapter two is pretty skimpy on side quests but includes a number of meaningless dungeon crawls.

Not to say that dungeon crawls are a bad thing, but they could surely have wrapped them in some kind of sub-plot to give you more of an incentive to go in/progress through them than completist masochism. Finally, chapter three is a short sea battle and a collossal AoS — open-world wandering is discarded entirely (there could have been side quests amongst that AoS, I’m sure).

Rexxar is also somewhat inconsistent. He starts off being all “these civilised races, their battles scar the land, raaarh!”

Then, quick as you like, he’s all up in the anti-Alliance Navy war-mongering and completely cleaning out entire dens of poor native Quillboars just because they’re (understandably) a bit miffed that the Orcs have plonked themselves down all over their lands. Maybe they’re clever enough not to count as beasts, but there’s surely some middle ground to be had (or at least a paragon/renegade split).

And then there’s Thrall.

— What Thrall meant to say.

Yes, Thrall expresses his undying respect and admiration for the last of an extinct race by making him clean out kobolds and harpies and collect herbs. Well, at least by the end of chapter two he’s Ultimate Bro and leading massive attacks.

Is this the mushy romance sub-plot we never saw?

It’s cheap, simple, fun… Its flaws are relatively minor and it does what it does with gusto. Perfect for a sunny afternoon.