It was in a rather short space of time that I not only settled upon making a tutorial level for Project Y4, but managed to implement it. After adding twenty-odd triggers and more dialogue than was in the entire rest of the map, the first Project Y4 mini-mission was ready.

It was then that I thought Y4 was pretty much feature complete. Making the tutorial exposed a few problems with the mini-mission framework and I cleaned them up; fair enough. Everything is now ready.

But then I decided that I needed a Deus Ex-style keypad system. With some gentle nudging away from my silly implementation idea in favour of a much better one, a full-screen keypad was quickly completed.

Project Y4 may be a total conversion, but even with its gameplay changes it isn’t exactly engine-fighting central. It’s still top-down, the RTS controls remain and the interface is functionally untouched (though that’s because it’s functionally untouchable). Everything it asks of you is, if not immediately obvious, then at least based on existing interaction paradigms (can you tell I did terribly in my HCI exams?).

Usually, my instinct is not to go for a tutorial at all, but rather to have a gentle starting area so you can learn the ropes on your own terms. I did it with the little spit of linear dungeon-crawling that introduced Islands in the Sky 2004, and I did it with the beach starter in This Wreckage Gamma. It’s better than forcing instructions you probably already know from other games of a similar genre, right? 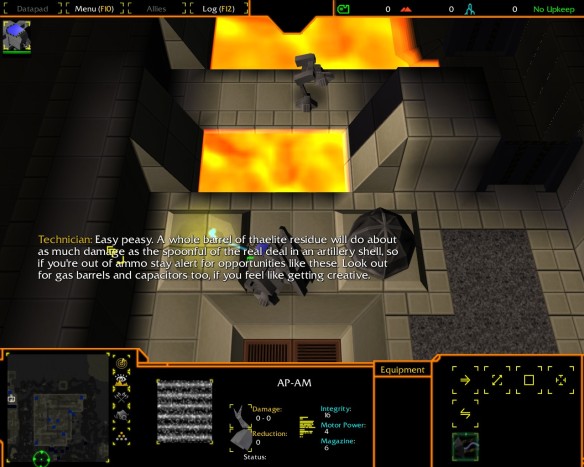 Because I know somebody will give me shit for this later: yes, "thaelite" is from Quake II.

As it stands, the main game of Y4 isn’t particularly talkative (in stark contrast to The Wreckage‘s you-have-been-waylaid-by-a-cinematic-quest-intro-and-must-defend-yourself every five minutes), and as you go into the game you’re supposed to be a reasonably experienced operative. This situation doesn’t really lend itself to “by the way, you heat up if you sit in lava” or “use your EMP bolt to open barrels”. You’re even supposed to be experienced with the AP-AM itself. I mean, why would they send a rookie in a mech he’s never used to liberate a facility entire teams of mechs couldn’t crack?

So the discrete tutorial steps in; the technician doing the hand-holding thinks you’re a dumb soldier, so he can get away with over-explaining things that may seem obvious to some, but might not be to others (depending on how savvy the player is in terms of modding/my previous maps). He can tell you minor pieces of lore and build you up for the action, too, saying things that Operations Central would naturally assume you to be familiar with. The balance can be upheld without breaking the immersion of the main game.

If you play the tutorial before the main game, then it’ll go on to start the real game when you finish it. If you’ve already played the main game without restarting the map, then it’ll go back to the menu (as will happen with all the other side missions). If you find the secret room… Well, nothing happens yet, I need to decide on a fitting reward. 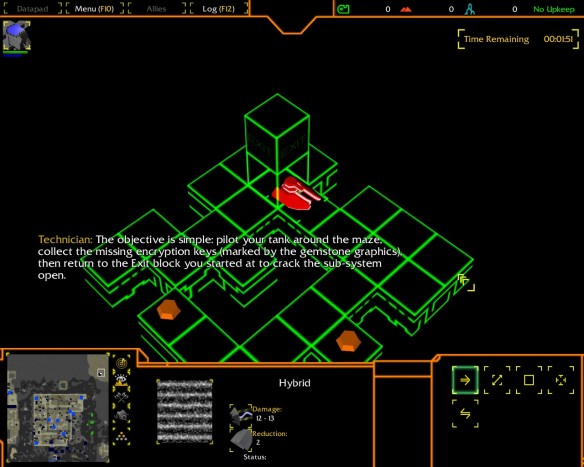 The Need for Full-Screen

This Wreckage had Scholars. Upon either talking to, or performing a quest for, these Scholars, each one would allow you access to his life’s work — a history book, that often revealed something of the mysteries of the temple and its denizens.

Scholars tended to be found in relatively quiet areas; towns, hidey-holes, that kind of thing. Places the wild animals didn’t frequent. Places where you could stand quietly with your mouse hovering over a tooltip, absorbing all the required information without interruption… In your own time. 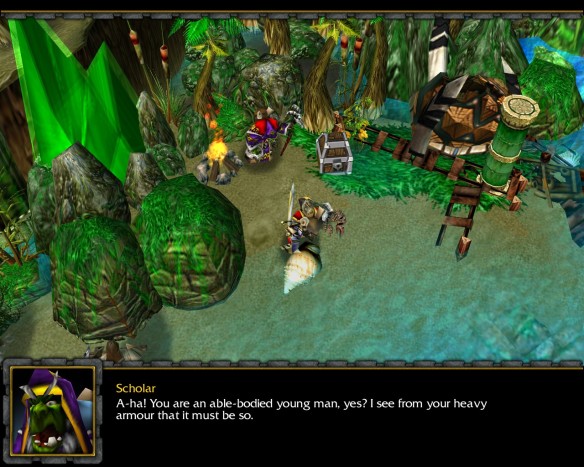 Project Y4 has computer screens. Unlike Scholars, computer screens are quite often positioned along drone patrol routes — they have to be, because pretty much the entire map is a drone patrol route. While you’re standing there, drones will pass by and they will disturb you. The result is that you probably wouldn’t read anything with the old paradigm (few enough people read the books in This Wreckage as it is).

So we need a different kind of interaction. Computers shall not just exist in the world, but shall be activated.

It’s not without precedent. The Ultimate Crane Game, for example, effectively puts the game in cinematic mode so that you are free to play without interruption (until the clock runs out, anyway), as does the new keypad system. The rest of the world is paused and waiting, waiting for you. Absolute control over pace — the one advantage of singleplay that nobody can refute. 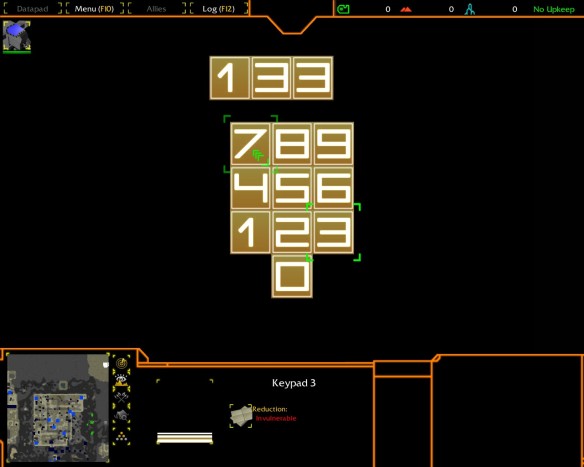 What's the code to the comm van door again?

This means that a full-screen computer interface is not an inconsistent thing to want to achieve. Indeed, considering the scarcity of tooltips beyond the AP-AM’s abilities, it’s probably more consistent…

And it’s another very distinctive, eye-catching feature to show off. I’m an attention whore, sue me. 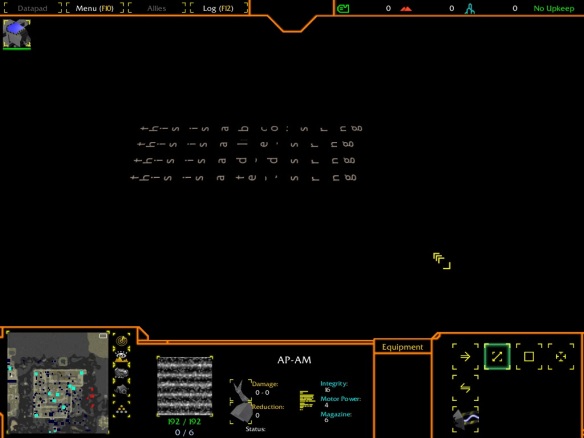 Initial trials were not without problems.

Full-screen with activation gives another advantage, in that I can track whether or not you’ve actually read something (at least to a greater extent than “the area containing this character is accessible”). If a computer contains a keypad code, for example, I can then shove that into your datavault for future reference. Or I can sling pieces of additional knowledge into cinematic dialogue. Maybe even secret endings and additional side quests? 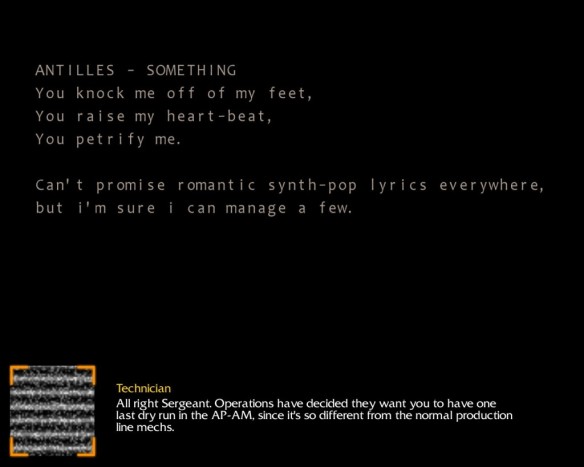 That left-over dialogue from the tutorial just serves to prove this is WC3 and not a dirty shoop.

The font I’ve chosen is Candara because it’s quite nice. But the time-consuming part of this was prepping all the models; making the single font-sheet image is relatively simple, so I could pick a different one later for not much effort. As you can see, the in-game layout is monospaced, so a monospaced font may be a consideration… Though I don’t want something nasty like Courier New. I’m open to suggestions, if you can show me something nice (preferrably a Windows font and not a downloadable).

I think I’ll also end up needing to add some kind of vertical scrolling, because once I make this convenient… Well, as you can probably tell from this blog (and the increasing average length of each entry), “Verbose” is my middle name. Right next to “Danger”. RDVDZ. Yeah.

And let’s take this a step further — with the full-screen precedent now set in beige concrete, where could I go with it next?

Every part of me aches. Just another abnormal day at the library.