Project Y4 is becoming quite a hot-bed of variety. As if a completely bog-standard hack and slash RPG wasn’t enough for the main game, now the procedurally-generated maze hacking mini-game is integrated nicely…

Unfortunately, due to some space constraints I had to increase the map size to 256×256 (the maximum possible, up from 192×192) a while back. This has left me with rather a lot of unsightly empty spaces.

Something really must be done about this appalling state of affairs.

No, RDZ does not wall things off and pull the wool over your eyes. He would never be so cheap.

Miniature unlockable bonus missions. You know how I talked about unlockables a few entries ago? Well, they’re in full swing using the magic of the game cache as planned — okay, currently you can only win some re-colour textures for killing a lot of explosive barrels (green paint for the gas barrels, et cetera), but I’m working in the unlockable missions now. Complete objectives, find secret areas… Each mission will be revealed by a different mechanism.

— Tagline of a popular franchise

These bonus missions won’t impact on the main game in any way. Each one will be different — miniature RPGs, arena or defence missions, boss fights… I haven’t actually got that far; all I have are the little pieces of terrain that will form the basis of these missions. 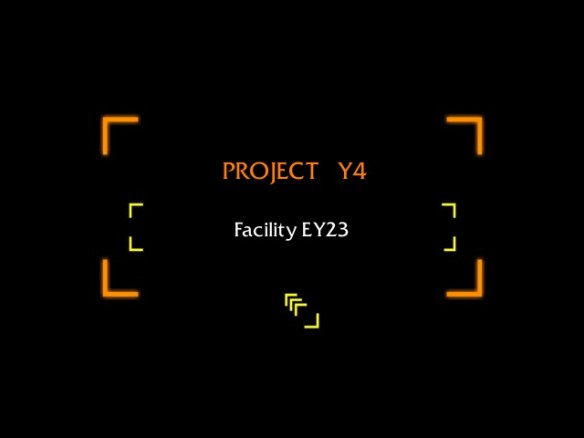 As you unlock missions, other buttons will appear.

Because the main game is such a badly designed and built clusterfuck, you won’t be able to replay it without restarting the map (to make it possible to reset the main game would require a stupid amount of work, though theoretically it is doable, because I always depend a lot on pre-placed objects and initial state). Hopefully I shall construct the bonus missions a little better so you can try them again and again without inconvenience; but either way, the magic of the game cache means that restarting the map doesn’t matter — you’ll still have full access to all your unlockables unless you deliberately eat the cache file. And why would you go and do something silly like that?

Unlockables will also be consistent across different playthroughs of the map, as long as (I believe) they’re all under the same user name. But it’s not like anything is going to be hidden behind branching plot paths, so you shouldn’t need to play two games simultaneously to unlock everything.

This is one of the first special areas I hived off. It is definitely going to be a defence mission, where you’ll have to hold the little listening station against waves of drones. Simple, right?

This one is still up in the air, but it pretty much exists to test out the sandy tile I added recently. Although I want it to be quite sparsely decorated (starting to worry that I might run out of doodads, especially with the terrible abuse of the pipework and monorail systems), I think I might need to add in some brown or tan rocks to round this one out. The planned gimmick for this level is to have rocks falling all around you as you do whatever it is you’re going to do, so I should probably add lots of small rock fragments underfoot at the very least.

"I've got dust in my clicker."

The Lake of Fire

This is definitely going to be some kind of arena, maybe a survive-as-long-as-you-can-against-infinite-enemies-and-post-your-scores. Those dicks from HoverCon are trying to sneak in the back door again, so you’ve got to kill them off… or something. I just really love the lava plane and those holographic force-field bridges. I suppose I could replace that fence with a gate and make it a hero defence where the enemies don’t attack you… 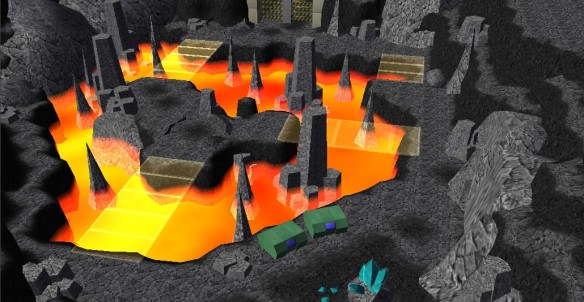 Out of the frying pan and into the fire.

This one blossomed out of the obligatory collect-materials-for-imba-weapons quest. The steaming blue rocks are tarochite, a fictional ore that holds tarobium, the ultimate metal that solves all problems for everyone ever (but not as many as the energy crystal taschari, which really is a collossal deus ex machina).

The objective here is going to be to stop some nasty enemies from harvesting the meteorites and making off with the precious ore. They’ll plummet in and you’ll have to show them that RDZ Industries is damn well going to get the finder’s bounty for this one. 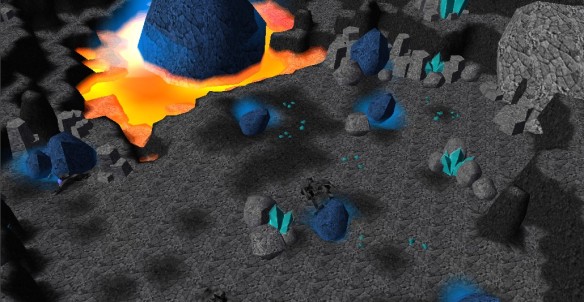 When I started to put in material for the freezing of units by cryo artillery shells or cryo barrels (and hopefully a support unit with Cone of Cold later), I knew I had to make a little more use of the icy overlay texture. “Gala’s Peak” is the name of a level from Unreal: Return to Na Pali, the expansion pack. It’s a bit of a strange level because you’re busy going through a reasonably sub-tropical Skaarj refinery, then you go down and up and along some deep dark tunnels and pop out on a glacier. From whence you proceed to a teleporter that takes you back to sub-tropical land…

I think this is the arena whose terrain is most likely to change a lot when it gets developed, as that rock wall is a bit shoddy and was very very quickly assembled. It’s also a candidate for massive expansion, as it backs onto one of the aforementioned giant empty spaces where once it was squidged along the map boundary. 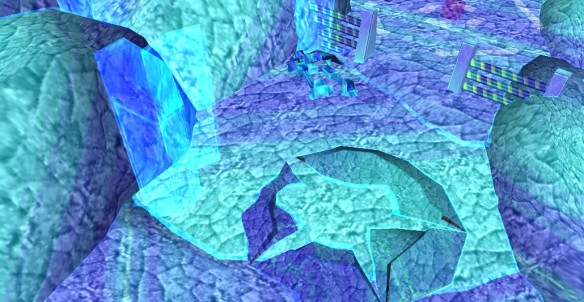 There will be more, of course. Lots and lots more. There is an imperial fucktonne of empty space along the top of the map, where only the corner is marked out for the cyberspace maze zone; so once I’m done winding these few missions around the edge of the actual main game zone, I still have a big empty plap to have some real fun with.

But that’s another story, for another blog.