Or “The Expanded Universe Unleashed”. Or “The Author Self-Insert Unleashed”.

I had to pretty much crawl on my knees like a dog to survey the pitiful PC game selection at Game, but at least they had a single full-height wall rack (even if the top was padded by being the top ten chart) instead of the five games stuck on the end of the counter I found last time.

There wasn’t much to look at, and I’m not particularly interested in Fallout: New Vegas (could be a candidate for a cheap GOTYE once they stop releasing DLC, though… call me in two years) or StarCraft II or any god damn MMO, so this one game that looked almost like it might be worth playing was a hard-won victory. And I’m well over-due some playing instead of modding.

Star Wars: The Force Unleashed: Ultimate Sith Edition. I dread the Expanded Universe, especially when it dares to stamp all over the glorious films that do actually exist as this one so gleefully does. For some reason, I still picked this game up and braced myself for impact.

Some spoilers ensue, but the terrifying implications the plot applies to the original trilogy will remain unprinted.

It took me a grand total of two hours to install the game. First, it took an hour and a half to unload its two DVDs into a collossal 28.6GB bulk (thank goodness I have a terabyte), then it took half an hour to install the patch. At least with a folder that big my value-for-money sense starts to tingle (lots of space means lots of files means lots of levels means lots of plot, right?), but it could still all have been wasted on normal mapping Vader’s underwear in ultra high definition.

The first mission puts you in Vader’s shoes as you slaughter lots of Wookiees in a gloriously over-powered Havok-physics destructible environment. There are Star Destroyers flying low in the background, TIE Fighters shooting overhead — for sheer spectacle, it’s a fine introduction. And with Vader being quite overpowered, you get to try out some combos you won’t have access to until later in the actual game. 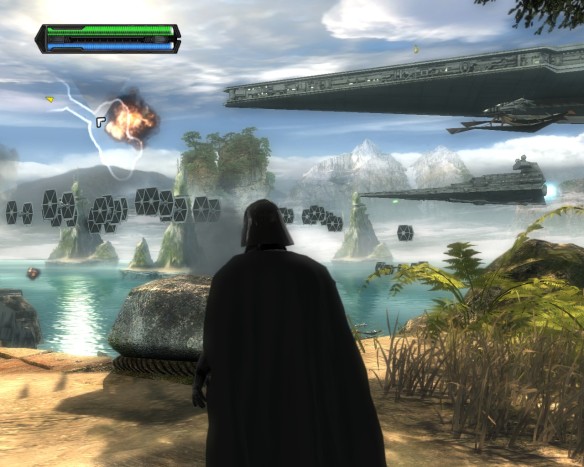 My initial expectation was that only the player character, Vader’s Secret Apprentice with “unprecedented force powers”, would be a Mary Sue, but it turns out that the blonde female pilot who takes you around the galaxy is also one. She is the Best Pilot Ever and was hand-picked for Vader’s Super Secret Search and Smash Squad and she wears a normal Imperial officer uniform but with her chest showing.

But hey, it’s a mushy romance sub-plot (in a game where you play (at least at the start) an evil character?), so I’m all right with this.

“You don’t understand the true power of the self-insert side. I must obey my author.”

Bordering On The Ridiculous

If you like your Star Wars on the stupidly epic scale that it does oh so well (okay, apart from Chewbacca being crushed by a moon), then this is probably the right game for you. As if the stunning scenery wasn’t enough, you’ll often find yourself (as a good little Mary Sue) facing down stupidly powerful enemies. Alone, naturally.

Take, for example, the AT-ST. It’s not stupidly large, but it’s big enough and it’s a bitch to take down. Force-throwing explosive barrels is the best strategy, then get up behind it and chop at the back of its head before it can turn around and stamp the ground and ruin you. Yes, as Kyle Katarn in Jedi Knight II you had to kill AT-STs, but you also had an arsenal of heavy weapons to use on them (or were riding in one yourself); Vader’s Secret Apprentice has only his lightsabre and his unprecedented force powers. Whoosh.

Or how about Rancors? You liked the one in Jabba’s palace, right? Well, now you can face entire fields of them, some of which are painted in phosphorescent markings by their bizarre masters. They are also bitches to take down, especially when there are loads of other guys floating around. The first few times environmental hazards like exploding flowers or giant whip-crack plant tendrils set off by lightning ease the load, but after that you’re pretty much on your own.

And then near the end of the game you fight a Star Destroyer. I shit you not. 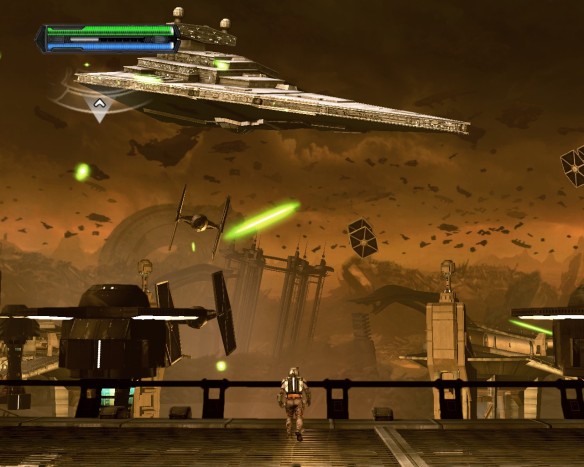 Finishing moves. Since this is a third-person action game, it’s all about combos. Which is fine; I can deal with button-mashing when I have the freedom to run around and have a choice of how to kill people, because by and large you’ll eventually hit some kind of correct combination to unleash the beat-down. I always enjoyed using the Leaping Slam, myself, but I never got near some of the more ridiculous combos that require hours of typing.

Then you get to the finishing move stage. For large enemies mentioned above, it’s optional; you can avoid setting the sequence off and just lightning or explosive barrel the bitch to death. But for bosses…

The annoying thing about the end sequence is that it endlessly loops until you get it right or, presumably, you die. This sort of ruins the dramatic tension, though the sequences are extremely cinematic and your failures do flow together very nicely.

The real damper on this, however, is the key bindings. You can change them in the cruddy little loader program, but this doesn’t affect the in-game prompts; I had to spend a lot of time going back to the manual to map their keys to my keys. In a game whose combat is based almost entirely on combos, this is pretty sloppy porting. They may as well have just locked me in to the default set… Bah.

I think I've only ever managed to press jump fast enough once.

Everyone I have mentioned this game to has responded with a comment along the lines of “buggy as fuck”, but having patched to 1.2 I’ve just not seen it.

Yes, the cinematics are stretched instead of letterboxed, and yes, it crashed on me twice. But “can’t get past the first five minutes due to game-breakers”? No sirree.

The worst problem I found was in the aforementioned Star Destroyer fight, where the on-screen prompts for stage 3 of the fight are wrong; you have to pull the nose all the way up rather than to where the game would direct you. But hey, the Internet is full of quite enough ranting about that episode to get you through it.

This Game Reminds Me Of…

Alas, my value for money sense tingled in error. I bought this on Sunday the 24th  and, despite being at work all day and sitting down for nary an hour or two of play-time in the evening, finished it by the next Sunday; including the bonus missions, it sits at just over ten hours (and most of that comes from failing again and again at a few key points) — when I can get Deus Ex in under a gig and it lasts 20 hours even knowing where to go… Hell, when I can make a 28MB Warcraft map that manages to occupy a lot of people for 10 hours… Less graphics more plot, thanks.

I know size and length have little correlation, but it does make me wonder where it all went. Unreal Tournament 3 exposes you to equally lavish backgrounds in many levels and manages to sit on the traditional 8GB. The two Mass Effect games also manage some jaw-dropping backgrounds, last longer and look nicer for a smaller size. Did they waste it all on the pre-rendered cinematics, most of which could have been done quite happily in-game? They’re all rendered in-engine anyway; the only obvious candidates for pre-rendering were things like a space station blowing up.

All in all, though, and despite the frightful damage I have probably done to my mouse, I quite enjoyed myself. Sure, it doesn’t actually exist (there are three Star Wars films and three alone… hmm, all my Lego Star Wars models bar one are invalidated), but it’s still quite fun to play. Quite fun.

It’s not going to go into my top ten or anything, but nor will it be secreted at the back of the shelf. It’ll go on the end so I don’t have to wake up to Jim Raynor staring at me every morning.

The worst thing, though, is the nagging feeling that this is canon. And I don’t mean Expanded-Universe-until-George-Lucas-overrides-it canon, I mean real proper movies canon. There has been a Lego model of your ship the Rogue Shadow…