The staple opponents in Project Y4 are subverted RDZ Industries mechs with AI drone controllers instead of human pilots.

That doesn’t mean, however, that I can’t show you some fresh designs, some fresh takes on common designs, and some you’ve never seen before…

When you start the game, you’ll be faced mostly with this line-up of cheap and cheerful opponents.

The RDZ Industries Delta chassis is the most versatile of them all, coming with a range of weapon mounts and even shield options. I suspect this line-up still has some expanding to do; it’s still missing plasma guns and the quad-shot.

The Alpha is huge, slow, and packs a serious punch. Engage these behemoths very carefully.

Making a comeback from the heady days of series X is the Platform Mech. This is slower than an alpha in every way, and more lightly armoured, but it has considerable range — something to be extremely wary of when trying to hack a Telegraph node. This bizarre three-legged-shuffle design was inspired by a unique campaign unit from Earth 2150: Lost Souls. Alas, I can’t find the older version or pictures of it for you to laugh at… It wasn’t pretty, you’re not missing anything.

Due to the chaos of the facility’s being taken over, other corporations are looking to do a bit of smashing and grabbing. HoverCon are the quickest on the draw, and have wheeled in a squad of their HoverCon 2 medium-weight tank… 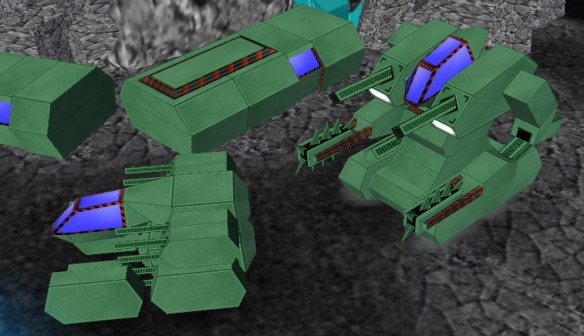 … Along with their answer to the AP-AM — the HoverCon D.

This isn’t the complete line-up, as usual. I fully intend to bring the Omega up to speed for use as a mini-boss, and there is a version of the Alpha with huge mining saw arms in the works.

Another avenue I’m exploring is Support Units, specialist machines that can be summoned via satellite uplink. These will be combat units with special abilities; for example, the first one I’m exploring, the “Ice Vulture”, will have Cone of Cold (assuming I can handle the magic of triggering a cone… select all units in a radius and check their angle from the caster, right?).

And then there are a number special plot-centric units that I can’t tell you about emerging.