Yesterday I turned 22. Yesterday I bought the extended and remastered versions of A-ha’s first two albums, Hunting High and Low and Scoundrel Days with some gift money.

The selection of unreleased material is absolutely jaw-dropping incredible.

My life just got a little more complete.

The remastered albums don’t sound much different from the original CDs that I have — unlike, say, OMD’s Dazzle Ships remaster bringing stunning clarity to the likes of the typewriter sound on Genetic Engineering — but then again, there aren’t very many moments like that where somebody with cloth ears such as myself could notice the difference.

The extended remixes that are appended to disc 1 are occasionally somewhat frightful, in that no amount of digital remastery can change some awful and obvious cut ‘n’ shut parts. The overall rearrangement concepts are pretty cool, but some of the implementations are… lacking. But hey, they exist, and the things on the bonus discs so incredibly eclipse any minor slip-ups there might have been on the 12-inch versions. 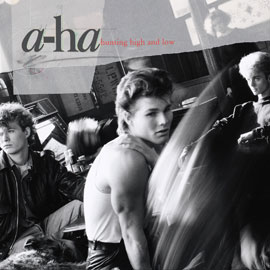 There are various different versions of Take On Me scattered across discs 1 and 2 of HH&L. Both the original 1984 and demo versions are really rather nice; the demo has a lot of character, lots of spiky little keyboardy bits that got produced out of the final.

The demo of Train of Thought is completely different from the final version. It’s much slower, got an almost entirely different rhythm to it, backed by different synths and percussions, a crazy flute solo towards the end, and it has a lot of additional lyrics to boot.

The demo of Hunting High and Low is completely unrecognisable until the chorus — the lyrics of the verses are completely different, the sound the mood the atmosphere… Wow.

Disc 2 is absolutely phenomenal. It has demos for every single one of the album tracks and they’re all completely different. Is this how A-ha could have sounded? Some are a little bit rough around the edges (The Sun Always Shines on TV seems very small and juddery), maybe, but they’re still amazing.

I’m gobsmacked, yes. I never knew that A-ha (and/or their management) were sitting on this gold-mine. These are not the remnants of some cruddy jam session before they learned to play or sing. These are all proper.

These are the original reason why I’m here, though those demos put a whole new value-for-money slant on the package. I like unique tunes, especially from my favourite bands.

Stop and Make Your Mind Up is, indeed, musically much closer to the demo suite than the final album. It’s a neat little disco tune with jittery drums. Dot the i is a whimsy little “lost” track with a cute melody, that is somewhat reminiscent of Maybe, Maybe from Scoundrel Days.

But I can’t individually describe just how wonderful all these lost tracks are, because we’d be here all day. I’ve realised all over again why A-ha are one of my favourite bands. These additional tracks show them in a whole new light that just adds to their splendour (and to the regret that they are going to be no more soon).

Hell, there’s enough additional material here to have had a whole other stand-alone album back then — it is all deserving of far more than being stuck as a mere addendum twenty-five years later.

I’m very pleased with what they’ve done with the album artwork. That is, not much at all — the changed panel is the track listing on the back, and instead of what was done with the Ultravox back panels (generic modernised, rather than sympathetic to the original artwork like the older remasters) these fit well and look nice.

The booklets also include lyrics and background lore, again done in a sympathetic style.

I’m sort of surprised by just how many demo versions the band had to record for Scoundrel Days. You’d have thought that, having finally established themselves with the previous album, they’d get a bit of slack when it came to letting them move on — apparently not. 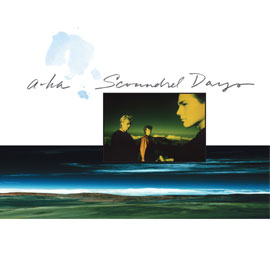 The demo of The Swing of Things (demo number three, apparently) more like a live performance than an album track, raw and energetic, with its crunching guitars and the vocals reverbing like in an empty warehouse.

We’re Looking For the Whales, always one of my favourites, is relatively similar to its final except for (a bit like Take On Me) lots of little synthy bits that really stand out and some additonal lyrics. It also has a really nice half-fade ending that is completely absent from the final.

Maybe, Maybe has a lot of additional lyrics too, but its most curious is an addendum to the chorus.

We could be wrong together…“

All in all, very very strongly recommended. If you’re a die hard like me, this remaster will not disappoint in any way. Even casual fans will find joy in the lost gems and additional B-sides that the bonus discs bring.

Roll on remastering the next albums, I say — they’ve done a brilliant job across the board with these two. I think the only complaint at all that I can level is that there are no printed lyrics for any of the bonus tracks that have additional words.

And more importantly… Why did I not buy these sooner?