When times get tough, and you don’t know what to do, how do you relax?

You make a Warcraft map!

Okay, so I just finished my fourth year solo project — you know, that big steaming pile with the Novint Falcon and the 3D audio and all that? Gone. Done. Over. Finito.

Finally, my computer is clean of all that haptic bullshit that has been clogging it up for so long. Registry cleaned, drives defragmented.

Theoretically, I could have been finished on Wednesday, but I spent all morning in bed and all afternoon playing Drakensang instead.

It’s not like I’ve been really hard working over the last few weeks anyway; I’ve been quite comfortably on top of the report. You know, pumping out massive piles of it, showing them to my supervisor (quote-voice, “yeah, that’s fine”… fanx), pumping out more, proof-reading it, trying desperately to make it take up more pages…

It ended up at precisely 10,000 words, according to a LaTeX (a Linux thing for typesetting documents like a pro) word-counting program, so of course I had to call it a day and make no more changes after that.

Submission time is between 2pm and 3pm this afternoon.

ANYWAY. Now that that is all completely over and done with and all I have to worry about is not studying for the exams, you want to hear about…

So a couple of weeks ago I got the Urge. You know, that one that can topple even your desire to continue playing Drakensang.

It starts with dreams. You’re lying in that half-awake state between actually being asleep and being awake, and your mind starts to churn. You see things, you start to connect them with resources you’re aware of. Then they start to have roles, plot elements, you see how Throw Rock could be implemented. You can even see the intro cinematic, hear the narrator speaking a few carefully-selected lines…

With all these deadlines and scary life-changing endings approaching, you realise that you’re brimming with nervous energy, you’re bursting with the desire to do something.

And then it hits you.

You need to make a map.

It’s called Brownscape because it is, as you’ll see from all the screenshots, pretty brown. It is called scape: Torment because, naturally, I recently finished playing Planescape: Torment. It bears no other relation to that title.

Please be aware that this is only the working title. Even I am not daft enough to call a real map Brownscape. But I always like to have hilarious code-names for my projects, and I haven’t written enough of the plot to begin assembling a true title.

Like my last attempt to make a new map, this will probably sink without trace too. But still! It’s got loads and loads of artwork, and I even got permission from the legendary Olof Moleman to edit one of this models (I don’t think you appreciate how big that is. That’s like me giving somebody permission to edit one of my models) for the main characters… Well, and most of the civilians. I’ll show you in a sec.

Brownscape is set in the middle of the desert, which naturally sets the colour scheme. Right in the heart of this wasteland lies a small fortress protected from the worst of the desert winds by walls of rock. This fortress is inhabited by the insect-like, and equally brown, Shul’kra, or “Children of Shul” — they hate outsiders, who are forced to visit only the settlement’s Tavern of Broken Wings, and they hate magic.

The Shul’kra are all edited versions of Olof Moleman’s Geonosian model, so massive, massive thanks and credit to him for making the model and letting me go nuts with it.

It’s a singleplayer RPG, and you take on the role of Lash, the Outcast, who was forced from the settlement for his use of and research into magic. “Forced from” in this case counts as reducing his status to that of an outsider; his house is inside the fortress wall but still outside the town proper, and he may only visit the tavern.

Well, he may also wander out into the vast expanse of desert that surrounds the town; the map is a whopping 256×256, and even with large portions hived off for underground and indoor regions, that leaves plenty of desert for you to get lost in. I have created a rather nice looking heat system — the longer he’s out in the desert, the redder Lash gets, and the brighter the screen goes (why does nobody ever use Fade Filters with additive mode?). Eventually, he’s as red as he’ll go and his hit-points will start to seep away. Only by reaching an oasis or leaving the desert can he cool down again, though there may be other means by which you can keep chilly under the sun. Cooling down resets the heat-meter, so you’ve got another so long until he starts taking damage again.

Then adventures occur and shit gets real.

I must stress now that these screenshots are not final and there is still much work to be done.

Knowing my luck, announcing the map to more than the three people that ever listen to me in the WC3C IRC channel will be the kiss of death, and this is the last you’ll ever hear of Brownscape: Torment. But I can dream. 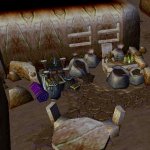